With 11 minutes remaining in regulation, only one question hung over an otherwise seemingly decided World Cup final Sunday.

The final result a forgone conclusion, the closing minutes of Qatar 2022’s dream final between Argentina and France were shaping up as a victory lap for Argentine genius Lionel Messi around Lusail Stadium, his closing — or opening — argument to claim the title as the sport’s greatest ever.

And then in 133 breathtaking seconds, 133 clicks where on plazas and boulevards in Buenos Aires and Paris, around TV sets at millions points in between and far and wide, inside the glittering sports palace glowing in the darkness of Qatar’s moral and physical desert, the world’s soccer fans turned to each other in stunned disbelief as France’s Kylian Mbappé turned the final, this World Cup upside down with the biggest “holy (expletive)” moment this tournament has ever seen.

A pair of Mbappé goals barely a minute and a half apart squared the final at 2-2, launching this World Cup, the planet onto the wildest of rides.

By the end of a match decided only after two hours by a penalty kick shoot-out, secured by a goalkeeper who had spent nearly a decade on loan to teams in England’s lower divisions, the world had witnessed Messi and Argentina and arguably the best World Cup in history crowned by the greatest final ever played.

When the planet has finally caught its breath, after we’ve turned to each other and asked, “Did we really see that?”, After we’ve been assured that indeed we had, we can fully appreciate the masterpiece created on Qatar’s barren canvas by Messi and Mbappé, two would-be kings, lifting their nations, and their game to a place only a few even dare to dream of.

Messi, 35 and playing in his fifth World Cup, struck first, sending a penalty past France goalkeeper Hugo Lloris in the 23rd minute. Thirteen minutes later he also played a key role in the build up to an Angel DiMaria goal strung together by a string of one touch artistry.

Messi was discovered as a young boy in Rosario. But his promising career was nearly derailed before he even reached his teens. Small in stature, he was diagnosed with growth hormone deficiency. His family’s insurance would cover only two years of growth hormone therapy. Two of Argentina’s top clubs refused to pay for the treatment. It was only after moving in with relatives near Barcelona that Messi blossomed.

He won a record seven Ballon d’Or awards, given annually to the world’s top player, en route to leading Barcelona to four UEFA Champions League and 10 La Liga titles before moving to Paris Saint-Germain in 2021.

But success had eluded him in four previous World Cups, Argentina’s loss to Germany in the 2014 final following quarter-final exits at the 2006 and 2010 tournaments. Messi and Co. were sent packing in the Round of 16 four years ago in Russia.

Through a first half dominated by Argentina, past an hour, sport’s greatest prize finally seemed to be within his reach in his final World Cup match.

And then Argentina defender Nicholas Otamendi fouled France’s Randal Kolo Muani in the penalty area. Mbappé, 23, converted the penalty kick. France’s celebration had barely ended when Kingsley Coman stripped Messi of the ball at midfield, found Adrien Rabiot who floated a pass to Mbappé breaking down the left side of the pitch. Mbappé centered the ball to Marcus Thurman who sent it back to Mbappé, who drilled a first-time, right-footed volley goal of the tournament into the back of the net to deadlock the match at 2-2.

Another hero of Rosario, the revolutionary Che Guevera, once wrote, “This is not a story of heroic feats, or merely the narrative of a cynic; at least I do not mean it to be. It is a glimpse of two lives running parallel for a time, with similar hopes and convergent dreams.”

And the remainder of the final would be an epic race between Messi and Mbappé, club teammates at PSG, to claim the World Cup.

Messi put Argentina up 3-2 after a chaotic goalmouth scramble in the 109th minute, his seventh strike of the tournament. Mbappé sent the final to the shoot-out with a second penalty kick goal, giving him the first hat-trick in a World Cup final since England’s Geoff Hurst in 1966, and only the second in tournament history.

Up first in the penalty-kick shoot-up, Mbappé again converted from the spot. Messi was up next. He also converted.

The final was now in the hands of mere mortals.

Next up for France was Coman. He faced Argentina goalkeeper Emiliano Martinez. Signed by Arsenal in 2012, Martinez couldn’t crack the starting lineup for the Gunners and spent the next seven seasons on loan to five different teams in England’s lower divisions as well as Spanish bottom dweller Getafe before moving to Aston Villa in 2020.

Sunday, light years from Oxford United, Martinez provided the match’s decisive moment, diving to his right to stop Coman’s penalty. France’s Aurelia Tchouameni shot wide in the next round and the World Cup was finally Messi and Argentina’s.

Whether Sunday — not to mention scoring in all four of Argentina’s elimination matches — was enough to lift Messi above Pele, winner of three World Cups, or Maradona, the tormented genius, remains a debate for the ages.

It is a conversation that could very well include Mbappé in four years time. Mbappé claimed the tournament’s Golden Boot award, given to the leading scorer, with eight goals. With his goal in the Russia 2018 final and Sunday’s hat-trick, Mbappé became the first player to score four goals in World Cup title matches.

And as Mbappé enters the prime years of his career he will be backed by a supporting cast of young stars on the way to the 2026 tournament.

Messi and Argentina weren’t the only big winners Sunday. The brilliance of Messi and Mbappé, the emergence of young stars like England midfielder Jude Bellingham, the level of excellence from the tournament’s opening whistle to the last penalty kick Sunday, gave FIFA and their Qatari hosts just what they wanted: a month-long can’t take your eyes off it diversion from the corruption that led to Qatar’s selection, the thousands of workers who died building stadium and other venues, and Qatar’s abysmal human rights record.

FIFA president Gianni Infantino and Sheik Tamin bid Hamad Al Thani, the Emir of Qatar, were all smiles as they stepped onto a stage for Sunday’s awards presentation. The sheik placed a black robe with gold trim on a confused Messi. At first Messi looked like he had gotten lost on his way to Hogwarts. But the robe is a bisht, worn by royalty and at special occasions.

And so it was fitting dress for a man who in lifting sport’s greatest prize into an electric night was finally king of the world. 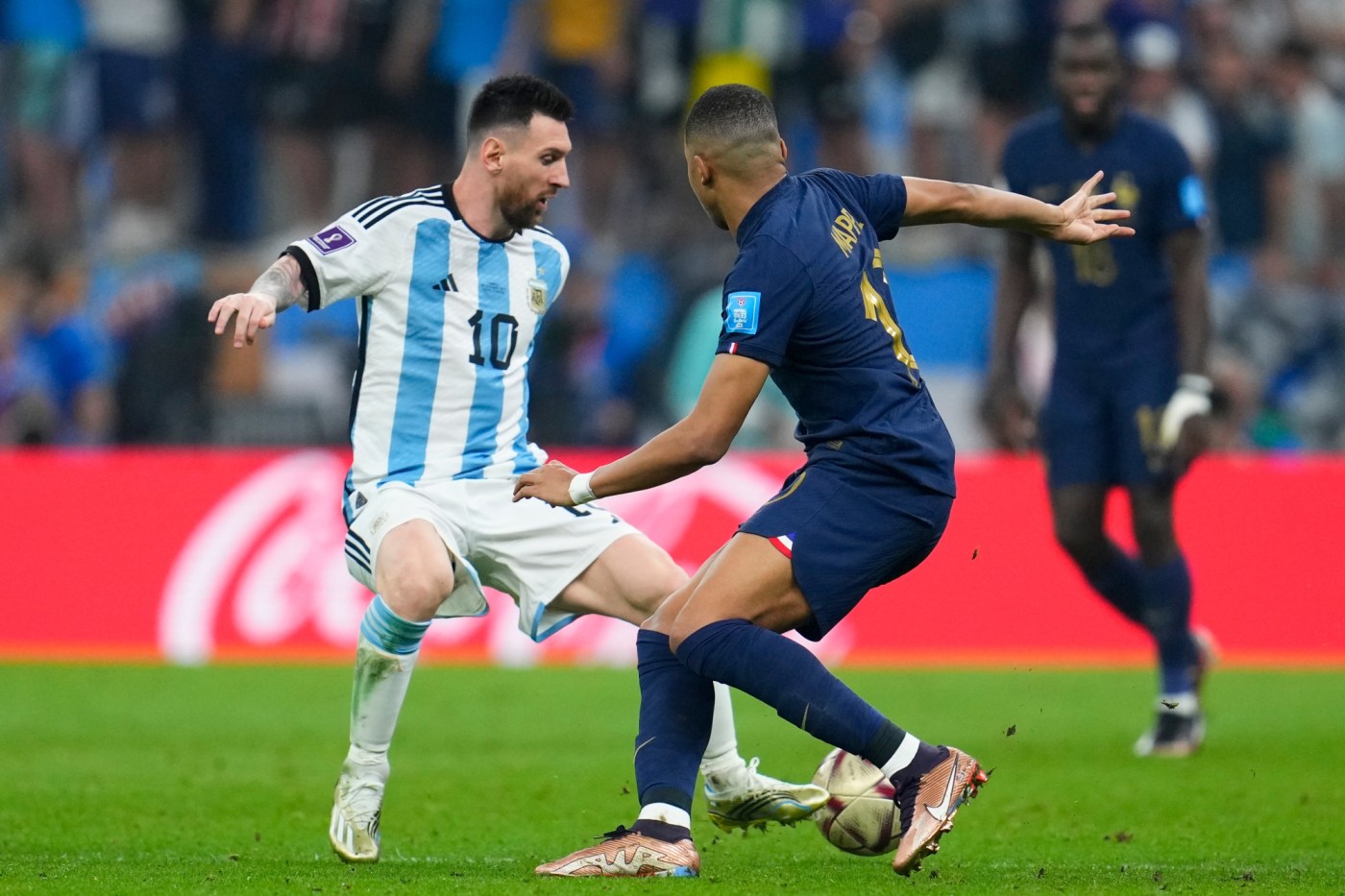