Chasing Ones Own Tail

HANK PHILLIPPI RYAN: Do you have a cat? And when I asked you that, what was your reaction? A moment of sweet memory or nostalgia? Or an eye roll ofwhoa. Cats. We all have a cat story, right?
They are amazing, hilarious, imperious, confident, mysterious, needy and aloof. All at the same time. How do they do that? They can make themselves invisible, airborne, and weigh a million pounds. They know what were thinking, beyond a doubt.
One of the foremost cat whisperers ever is our dear Clea Simon.
TORTITUDE
by Clea Simon 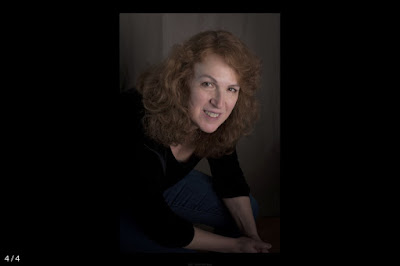 Thanks for having me on here today! Im thrilled to be making the rounds for An Incantation of Cats, which is my 25th mystery featuring cats. Twenty-five? That is, by any measure, a lot of fur.
By this point, therefore, Im used to people asking, How do you keep on? But recently I fielded a new question, one that floored me: How do you find new things to say about cats?
On one level, I saw her point. Cats, for the most part, are creatures of habit. Thanks to their pre-domestication history ruling the veldt as alpha predators, they hunt or play in short, active bursts and then sleep or rest the roughly remaining 80 percent of the time. And while they have their amusing quirks (Thisbe willunscrew the drain cap in the downstairs bath; we dont know why) and habits (Musetta carried the purloined belt of my terrycloth robe around like a trophy), these are rarely ever the kinds of behaviors that lend themselves to active sleuthing of anything but prey. 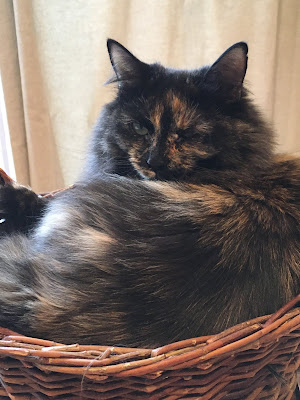 But arent people predictable as well? Dont we, as crime writers, rely on habits and repeated behaviors, the revelations of the unexpected response or inconsistent reaction? And wouldnt a feline, whose very survival long depended on quick and accurate appraisals be better suited to sleuthing than any mere human, if she or he chose to undertake it?
Did I think to say that? No, of course not. In response, I stammered something about the individualization of all creatures. I might have even mentioned the particular character of tortoiseshell cats aka, tortitude which Im now learning about through Thisbe, our current feline overlord.
Tortitude? Yes. Id originally dismissed fur-linked personality traits as a myth (hey, Im a redhead and reasonably tempered, and the smartest woman I know is a blonde). But Ive since learned that felines are different and the genetic makeup that allows for three distinct colors in a cats coat is also linked to the genetics that define feline aggression. Which is not to say that torties or calicos, same idea but more white in the mix are angry. Instead, they are more energetic and often, well, more creative than other cats. (I wouldnt adopt a tortie, one rescue worker told us. Theyre crazy.) 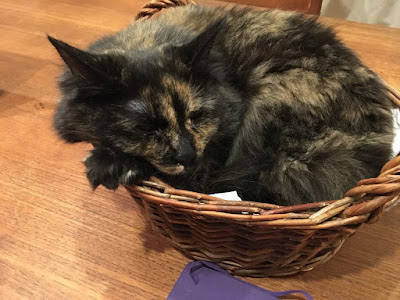 In truth, Thisbes antics could power a whole new book. Theres that drain cap, for example, or her rather startling ability to knock any flying bug out of the air with a leap and a swipe, as well as her ongoing narration as she races around like a Jack Russell terrier in a wooly bear suit. And, yes, Im now borrowing some of Thisbes tortitude for Clara, the calico heroine of my new series.
If nothing else, her energy and perseverance I like to think of these as running parallel to her loyalty and love stand out in contrast to the dominant traits of Claras fictional sisters, the longhaired Harriet or the sleek Laurel, with her part-Siamese markings. (Yes, I let standard cat behavior guidelines dictate the basic outlines of her littermates characters, with the heavier-bodied Harriet being a tad more indolent and thoughtful, while Laurel is more graceful and actively inquisitive.)
And Ive spent enough time with cats to be intrigued with how they behave socially in a litter or a clowder and to know that our behavior (and our characters) when we are by ourselves or among our own is often much richer than what we may show when we know were on display.
So now I wish that friend would ask me her question again, because I finally have the answer. I find new things to write about my characters all my characters, human and feline alike because they are individuals to me, as alive and vibrant as you or I. Do we sometimes find people boring? Of course, and if were writers, we get rid of them (or, okay, use them for comic relief). But the species? Never. The day I cant find something new or intriguing about any of the inhabitants of my books will be the day I stop writing. Or give up on humanity entirely, and go play with my cat.
Do you view your pet as having a distinct personality? Whats it like? And what would her or his crime-solving skill be, if set in the middle of a mystery? 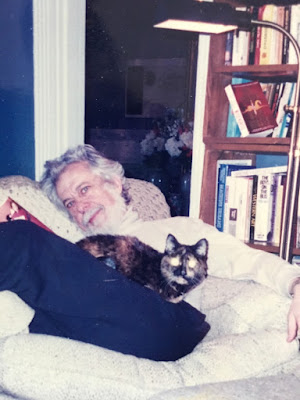 HANK: Oh, my darling tortoiseshell Lola (who died at age twenty, and the best cat ever--she still comes to me in my dreams, but thats another story) would be a supercat. She could incinerate people with her death stare. Lola was also very accomplished at being annoyed.
And annoying. Here she is with Jonathan. It looks all cozy and adorable, but Jonathan was allergic to cats. Which she WELL knew.
How about you all, Reds and readers? What're your cat observations? 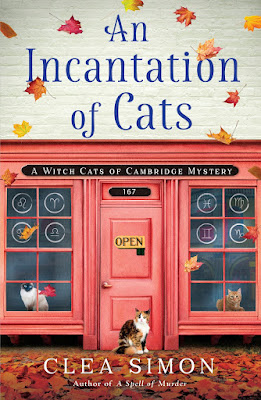 Clea Simon is the author of more than 25 mysteries, many of which involve cats. Her latest, An Incantation of Cats, comes out this month from Polis Books. She can be reached at http://www.cleasimon.com
AN INCANTATION OF CATS
When two new clients seek Beccas professional services, the fledgling witch detective is overjoyed. Finally, she can use her skills to help her magical community. But as the young witch finds the new cases intertwining, things grow more complicated. Beccas three cats the ones with the real power can smell something is wrong with these clients. But not even Clara, the calico, knows what to do when a man ends up dead and a powerful and poisonous root appears and disappears in the case.

To make matters worse, Clara and her littermates are feuding and she cant tell them about an unsettling interaction shes had with one of the clients sisters. Is it possible that some humans may have the same powers as the magical felines? What does that mean for Claras beloved Becca and for the potent poison that has already taken one persons life? In this second Witch Cats of Cambridge mystery, Clara and her sisters must learn to work together if they are to save the person they all love.
Share Share on Facebook Tweet Tweet on Twitter Pin it Pin on Pinterest
Back to News