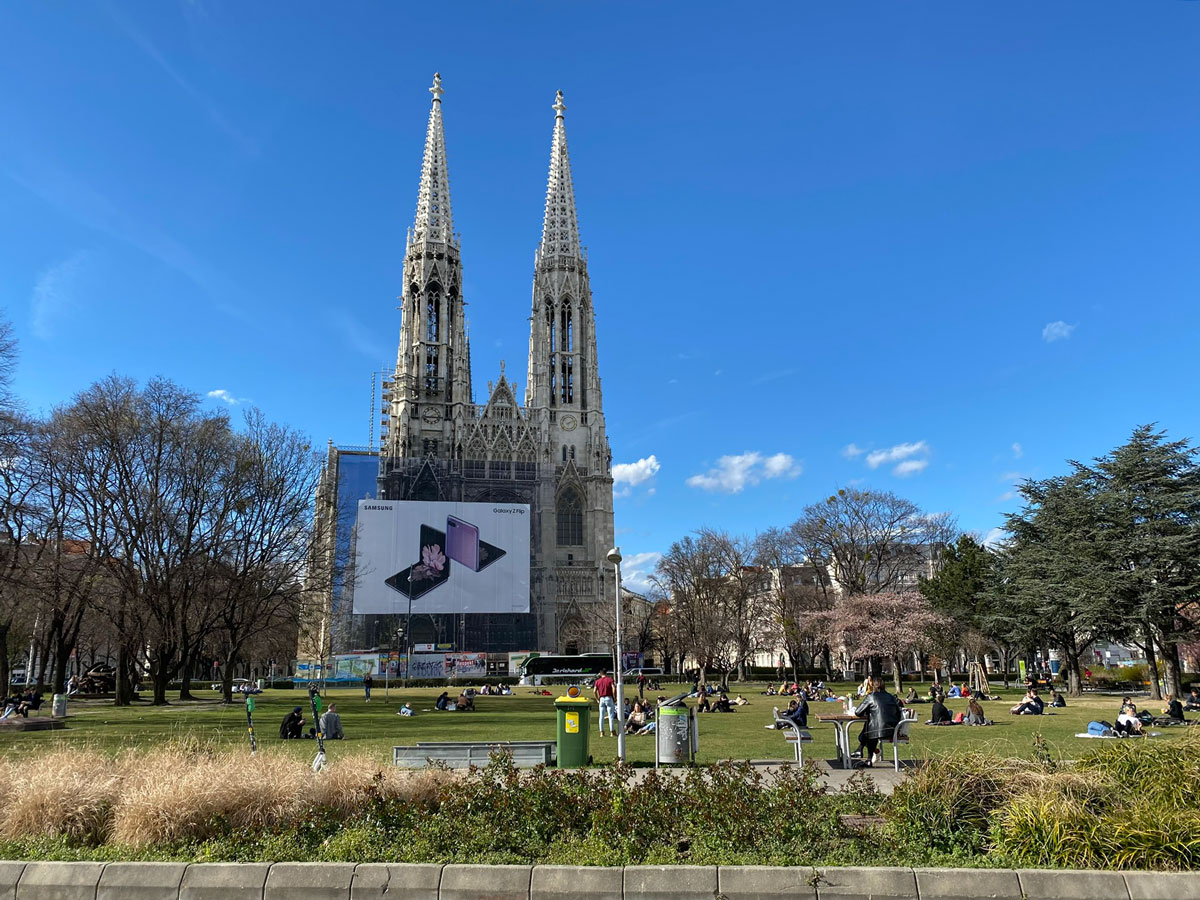 Friday the 13th. We were seated in a tiny Viennese beisl, or pub, eating sauerkraut, sausage, and egg dumplings under the imperious gaze of Habsburg portraits and monarchist bric-a-brac. At the bar, a few patrons were heavily day-drinking while others, older gentlemen all, sipped from giant half-liter beer mugs. Our waiter suddenly walked over to the TV and switched it on as everyone swiveled in their seats to face the screen.

I drew on my high school German to translate for my husband as Chancellor Sebastian Kurz appeared in a national address. Austria, he said, would be enforcing new measures in the face of COVID-19. All of these steps, he said, would be done to protect the most vulnerable Austrians, the elderly citizens who raised us. To contain the virus, Kurz said, schools would be closed the following Monday and workers would be asked to stay home. All shops except the essentials—groceries, drugstores, the post office—would be closed. Bars, restaurants, and cafes would close at 3 p.m. At this, the beisl’s patrons simultaneously groaned, and our waiter walked behind the bar and poured himself a beer. He raised his glass in a toast to the room at large. “It’s crazy!” he said. Everyone else raised their glasses and drank along with him.

When we settled up, we told the waiter we were sorry about the impact on his business. He shrugged and said, “What are you going to do?” He pointed out that stricter measures were underway in other parts of Europe. We overtipped him.

That day was the turning point of a surreal week abroad as we watched reaction to the COVID-19 threat unfold overseas and at home.

Before leaving for our planned spring break trip to Vienna, we’d monitored the news closely including in Austria’s daily Wiener Zeitung. There were a few dozen coronavirus cases in the country, mostly limited to the southern Tirol ski area. There were no U.S. travel advisories for anywhere in Europe except Italy, a country with which Austria had already closed its borders. The conventional wisdom was to travel as planned, wash your hands, and steer clear of folks with coughs.

When we arrived on Monday, March 9, life in Vienna hustled along as usual. We explored the massive Naschmarkt market and gawked at ornate apartment buildings. On Tuesday, we toured the historic downtown and rode the Reisenrad—“giant wheel—the 1897 Ferris wheel in the Prater amusement park, famed for its cameo in the Orson Welles classic The Third Man. We gawked at robe-clad scalpers selling tickets outside the opera house, and I tried to talk my husband into returning to pick up 3 Euro standing-room-only tickets. The next day we explored the Vienna Zoo—opened in 1752, it’s the oldest continually operating zoo in the world—and toured Habsburg opulence in the Schönbrunn palace. That night, we learned opera and theater performances were being cancelled and some cathedrals had closed. The next day, Thursday, museums were shuttered and restrictions were issued on public gatherings.

On Thursday morning we also woke up to a flurry of messages from friends and family asking if we’d make it back. Huh?

Turns out that as we slept, President Trump gave a news conference issuing a ban on travel from Europe. Luckily we missed the initial panic and didn’t race, as some did, to get $5,000 tickets home. That said, we abandoned plans for a day trip down the Danube to Slovakia and instead hung out in park that had been a favorite haunt of Sigmund Freud’s.

While Trump’s travel ban didn’t stress me, I went through emotional whiplash waiting for the University System of Georgia (USG) to make up its mind about its COVID-19 plans. I’m the publisher of the Red & Black student news organization at the University of Georgia and teach at UGA part-time. While other colleges were announcing extended spring breaks and switches to online classes, UGA and the USG remained silent. Break was drawing to a close and I didn’t know what to expect—nor did tens of thousands of students, staff, and faculty across the state. Late Thursday morning, Georgia time, USG issued a statement declaring all 26 schools would resume business as usual. Figuring that was settled, we went out to enjoy late-afternoon sunshine at a neighborhood beer garden. By the time we strolled back, USG had reversed its policy, extended spring break for two weeks, and asked students to stay away. I stayed up late drafting emails, communicating with our editors, staff, and sponsors.

Friday, we watched Chancellor Kurz issue that appeal to the greater good in an address that spelled out the risks of COVID-19 and the decisive actions taken in response. “It is important to act, to take quick measures now, and to stand together,” Kurz said.

Later that night, we watched a livestream of a White House press conference. The president assured listeners Google was working on a screening website, that drive-thru testing would be coming, and that “families returning from Europe, will be subject to extra screening, as well self-isolation for a period of 14 days.”

Over the weekend, we explored Vienna as it prepped for lockdown. Of course there is a German compound word for panic shopping—hamsterkäufe—or shopping like a hamster stuffs its cheeks with food. There’s a hyphenated compound word for the anxiety around COVID-19: Corona-Angst. We saw store shelves cleaned out (yes, the Viennese also stocked up on toilet paper) and signs popped up in windows announcing closures.

Vienna’s famed cafe culture has been named to UNESCO’s inventory of “intangible cultural heritage” and are an integral element of the city’s lifestyle. But we passed cafe after cafe with shuttered doors. Venerable coffee houses that had remained open through two world wars and occupation closed in the face of COVID-19.

On Sunday, we joined Viennese families in socially distant strolls through city parks and on the Danube. They were gearing up for a nationwide curfew that went into effect yesterday. We were gearing up to return to the States and to a lot of unknowns.

On March 16, the Vienna airport was on lockdown, with storefronts shuttered and gate after gate dark as travel was reduced to 20 percent of its usual volume.

“Good luck! We hope to see you again when all this craziness is over,” our flight attendant perkily announced as we arrived in Amsterdam’s Schiphol airport to transfer to the States.

Schiphol was equally eerie. With only a handful of kiosks and duty-free shops open, one guy at our gate hunkered down with a bottle of Merlot and a hunk of Gouda. We watched travelers pull at facemasks and stake out seats away from each other. The flight was hardly full—all the panicky folks had left over the weekend, crew told us.

As we approached Atlanta, we were handed forms we were told would be used in COVID-19 screening on our arrival. The questions were laughably broad—Have you had contact with a person known to be infected with “COVID-2019”—and included a badly formatted grid that was supposed to be used to list our symptoms. We also were told that because of the virus, the touch-screen kiosks at customs were closed and we’d have to fill out old-school paper forms, which we did.

We sat inside the plane at Hartsfield-Jackson awaiting screening. A crew of people wearing hodgepodge EMS uniforms, “CDC Temporary Staff” badges, and plastic face screens, walked down the aisles collecting our self-assessment forms. (They kept having to pause to explain the symptom grid to passengers who didn’t understand it and hadn’t filled it out.)

In exchange, they gave us a worksheet dated February 27, 2020. “You have received this booklet of important health information because you traveled from the People’s Republic of China,” the first page reads. “There is an ongoing outbreak of coronavirus diseases 2019 (COVID-19) in China.” The booklet instructed us to take our temperatures twice daily and keep a log “every day for 14 days after you left China.”

The health officials pulled a few people aside to have their temperatures taken and walked a handful off the plane. But for most of us the screening amounted to little more than having officials ask, “You feeling’ okay? Any coughing?” We walked out of our gate to a scene that was like a dystopian sci-fi movie with airport staff in masks and gloves, and caught a glimpse of at least a hundred people—including those taken from our plane—in a large glass-walled holding room. As we made our way toward the customs area, most of our fellow passengers with face masks yanked them down around their necks. It was stuffy, and they looked sweaty and uncomfortable.

We breezed through customs and were directed through the airport and out to the lobby. Nobody even stopped us to collect those paper customs declaration forms. Outside, Uber and Lyft drivers idled at the curb.

Surreal doesn’t start to capture the rapid series of events last week. We watched as a city centered on cafe life and cultural gatherings smoothly shut down. From afar, we watched our own city, state, and country lurch backward and forward with inconsistent messaging.

We’re home now in Athens, where campus is closed, streets are quiet, and our mayor and commission have issued a ban on gatherings of more than 10 people. SEC sports have been cancelled for the remainder of the season. The 127-year-old Red & Black is going digital-only for a semester. We’ve been told to monitor ourselves for the next two weeks and to self-quarantine. Today, when St. Patrick’s Day parties would normally be raging in downtown bars, we’re seeing a stream of announcements about businesses putting themselves on pause. When 5 p.m. rolls around, I’m going to pour myself a bourbon and toast that Viennese waiter. “What are you doing to do?”

Rebecca Burns is the publisher of The Red & Black, the independent news organization that covers the University of Georgia, and an adjunct professor at the Grady College of Journalism and Mass Communication. Her two decades as an Atlanta journalist include seven years as editor-in-chief of Atlanta magazine. She lives in Athens and tweets at @RebeccaBurns.