Get ready for a reissued, re-packaged YA classic considered by many to be the first teen book featuring an Asian American lead published by an Asian American author. Take a look at the cover for Finding My Voice by Marie Myung-Ok Lee, with cover art by Kemi Mai, out December 2020. Check out the synopsis below, and keep scrolling for an excerpt from the book: 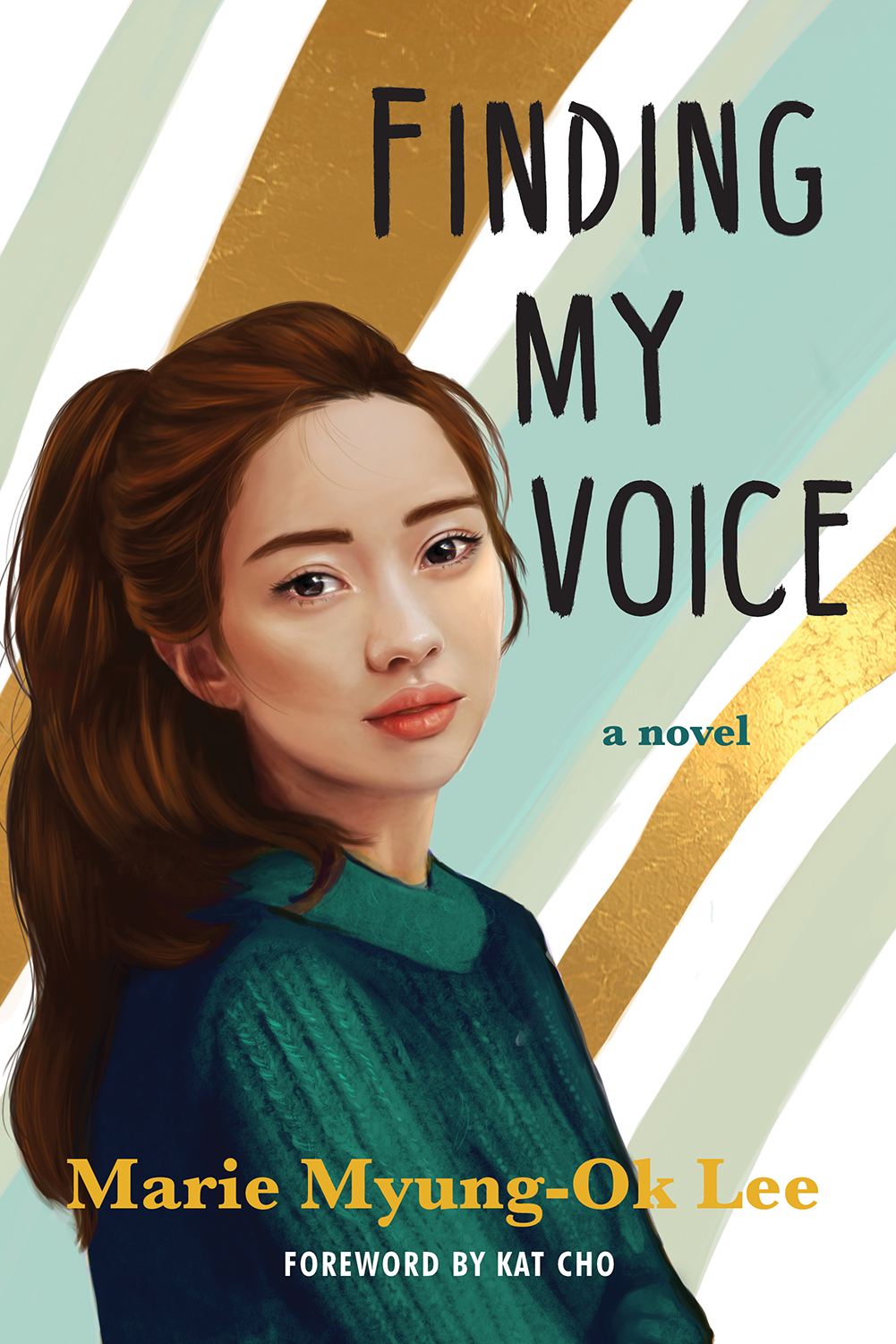 Finding my Voice is the groundbreaking own voices classic by celebrated author Marie Myung-Ok Lee. Seventeen-year-old Ellen Sung just wants to be like everyone else at her all-white school. But the racist bullies of Arkin, Minnesota, will never let her forget that she’s different—the youngest member of the only Korean American family in town. At the start of senior year, Ellen finds herself falling for Tomper Sandel, a football player who is popular and blond and undeniably cute…and to her surprise, he falls for her, too. Now Ellen has a chance at life she never imagined, one that defies the expectations of hanging out with her core group of friends or pleasing her parents. But is her romance with Tomper strong enough to withstand hometown bigotry and her family’s disapproval?

“Moooo!” It is still dark when I reach to shut off the Holstein-shaped alarm clock that my best friend, Jessie, gave me for my sixteenth birthday. To shut it off, you have to pull down on the cow’s enormous plastic udder. Mom wanted to throw it out. I told her it was just humor, Jessie-style.

I step into the steamy shower and let the warmth coax me awake. I shampoo, shave my legs, and let the conditioner sit in my hair for exactly five minutes, just as it says on the bottle. After toweling off, I put on deodorant, foot powder, perfume, and then begin applying wine-colored eyeliner under my lashes.

Do boys have to go through all this trouble day in and day out? How about Tomper Sandel, the football player who appears to be naturally cute with his shaggy blond hair and cleft chin—does he worry about how he smells?

What’s Up in YA? Newsletter
Sign up for What's Up In YA? to receive all things young adult literature.
Thank you for signing up! Keep an eye on your inbox.
By signing up you agree to our terms of use

I put on extra eye shadow in a semicircle around my top eyelid. According to Glamour magazine, this will give Oriental eyes a look of depth. I’ve always known that I don’t have the neat crease at the top of my lid—like my friends do—that tells you exactly where the eye shadow should stop. So every day I have to paint in that crease, but I don’t think I’m fooling anybody.

“Hurry up, Ellen,” Mom calls from downstairs. I throw on my new Ocean Pacific T-shirt and jeans and run down.

Mom is standing in the kitchen, quietly spreading peanut butter on whole wheat bread. She turns to look at me, and her eyebrows dip into a slight frown.

“Is that what you’re wearing to school?”

“Yes, Mom,” I say. We go through this scene every year.

“What about all those good clothes we bought in Minneapolis?”

“Those dresses are great,” I say. “But no one wears a dress on the first day of school.”

“Oh,” Mom says, as if she’s not convinced. She turns to finish packing my lunch. As usual, Father has already left for the hospital so he can get an early start on patients with morning-empty, surgery-ready stomachs.

I grab the Cheerios and milk, and eat while looking over my schedule one more time. This year, I won’t have Jessie in a single class. She took typing and creative foods so that she can have more free time. In the meantime, I’ll be sweating out calculus and trying to tack gymnastics onto my already-stuffed schedule. My parents say I have to take all the hard classes so I can get into Harvard like my sister, Michelle.

“Here’s your lunch,” Mom says, handing me a brown paper bag. I open it and find a small container filled with soft white ovals in sugary liquid.

“What is this?” I grimace, holding the tiny container aloft. “Litchi nuts,” Mom answers. “Remember? You love them.”

“Not for lunch,” I say, a little too vehemently. The truth is, I don’t want people seeing those foreign-looking nuts and asking what they are.

Then I remember that every day Mom packs Father’s lunch, then my lunch, while I’m up in the bathroom doing my deodorant-perfume-powder dance.

Mom smiles. She is so thin and small in her gown and robe. I throw my lunch in my knapsack and kiss her quickly.

“Goodbye, Myong-Ok. It’s your last year here,” she says. I look up at her upon hearing my Korean name. To me, it doesn’t sound like my name, but to Mom, I think it means something special. Sometimes I think she has so much more to say to me, but it gets lost, partly because of the gap separating Korean and English, and partly because of some other kind of gap that has always existed between me and my parents.