by admin December 03, 2019
Have you seen the AT&T commercials with the slogan, "just okay is not okay? That came to mind for me this week because that pretty much sums up my cooking both on Wednesday, and Thursday. More about that later..

Following our awesome camping trip, this happened on Friday morning, a week ago. 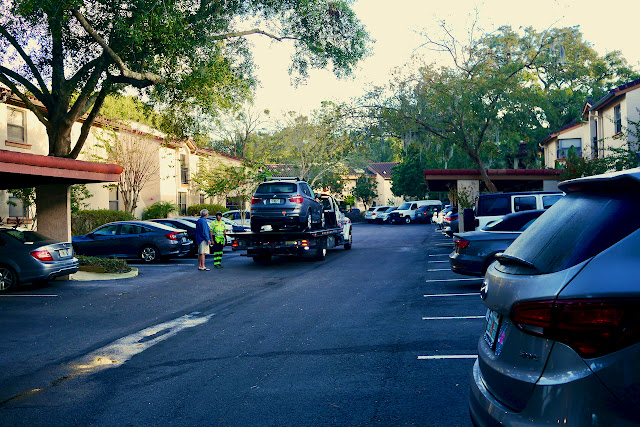 Thus, I wrote we were a one car family for some days. Not terribly inconvenient, but more of an annoyance than anything. Later that day we did some shopping for our contribution to the 2019 "Basket Brigade" which we were participating in through our church. 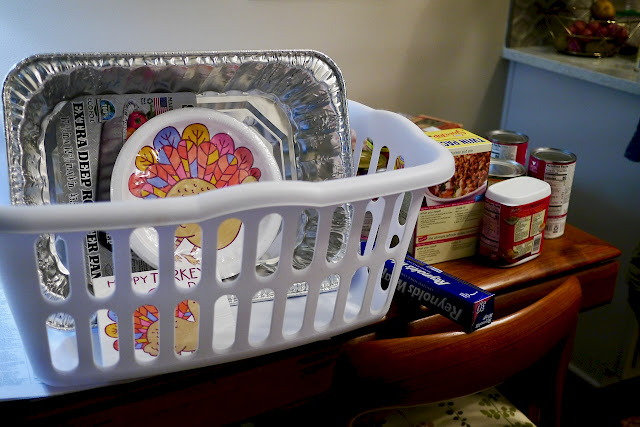 Although we've made a basket in the past, this time we were part of the delivery crew that met at the church for our assignments. 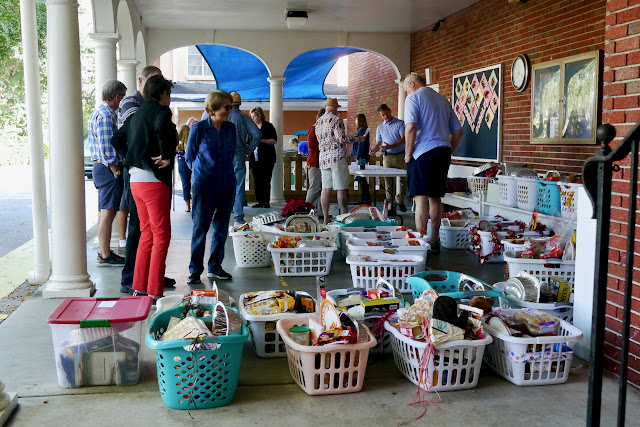 Thirty five baskets of Thanksgiving groceries, along with gift cards to buy the perishables, were made and delivered. Organized by Lisa and David, they had lists of addresses by areas of the city. We chose ones closer to us, or at least on our way to the errand that was to follow. One recipient was in an apartment complex that was neat and tidy, and in fact she was in her robe, asking us to leave it just inside the door. We could do that.

Next up was an apartment about a block from the Coalition for the Homeless with nowhere to park. Bruce was driving the MINI, so I hopped out to do the delivery. Although we were told that all recipients knew we were coming, at this apartment they were reluctant to open the door, however, eventually after I called out, a teenage boy surfaced, perhaps after looking through the cardboard covered windows and seeing an old lady who looked not very intimidating! Maybe it was his brother joining him, who knows, but anyway the two of them waved a thank you to Bruce in the car, as well as wishing us blessings. It is the least we could do following a year of good fortune, thanks be to God.

While the BMW was in the shop, we went looking at cars, something neither of us much likes Nevertheless, it had to be done because not having a reliable car, no matter how much Bruce did not want to get rid of his beloved (when it works!) car, has just been too much for us. One day he was sold on the Subaru Forester, the next, the Mazda CX5, going so far as to put a deposit on the latter. Sunday afternoon we went to Classic Honda on West Colonial to look at the Honda CRV, a very popular mid sized SUV. In fact, one morning we walked the entire complex looking at cars and counted about seven of them. The previous dealerships were not so bad, but this one.....yikes, they had so many that you could barely walk. 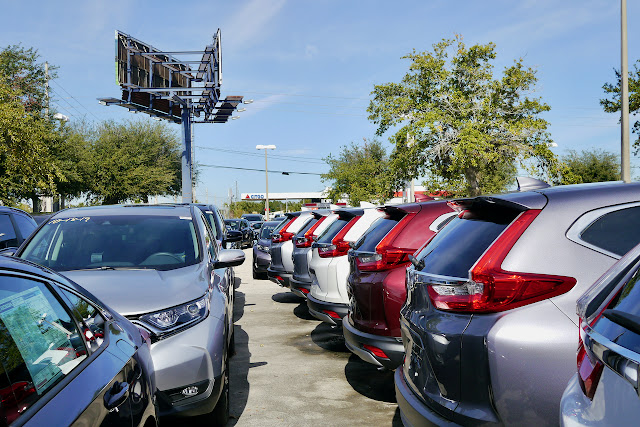 I was literally going crazy at this place, dying for the experience to be over. To be fair, the folks were fine, it was just so weird seeing about 100 cars jammed together, none of which were right.

Tuesday evening the car was finally ready, this time it was a fuel injector, something that was replaced during our Washington State breakdown. Looking back at the post, which you can do here, I am still amazed that we went through that experience.Fixed or not, the next morning Bruce was ready to let someone else take it over. Should you be wondering he disclosed all information, both good and bad! 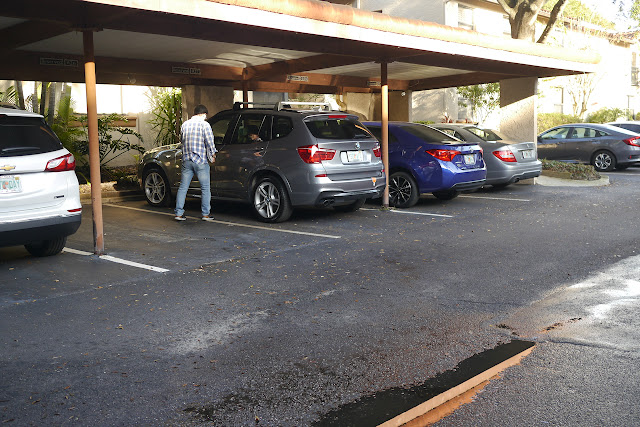 Contacting Angel, our very competent Subaru salesman, they agreed to meet at 9AM on Thanksgiving eve. I kid you not, it took almost all day what with them installing roof racks and who knows what else!

Speaking of the holiday this was unlike any other we've had while in Orlando. Sure, it was just the two of us in Vancouver, but as it turns out, all of our family had other plans for the big day. Instead of spending Thanksgiving together, I invited the closest Pecks over for lasagna the night before.

This is where the "just okay" comes into play.

I began by making a sour cream chocolate bundt cake. Having made bundt cakes countless times, I anticipated no problems. Until Wednesday. Friends, it is no fun making a cake for company and it fails to come out of the pan properly, instead a lumpy mess that I patched together. Thus began my cooking woes which were to continue for the next two days. Having not made lasagna before with the no-cook noodles, I should have put way more sauce in the pan. Although it was entirely too dry, no one actually complained, but I knew it was marginally "just okay." 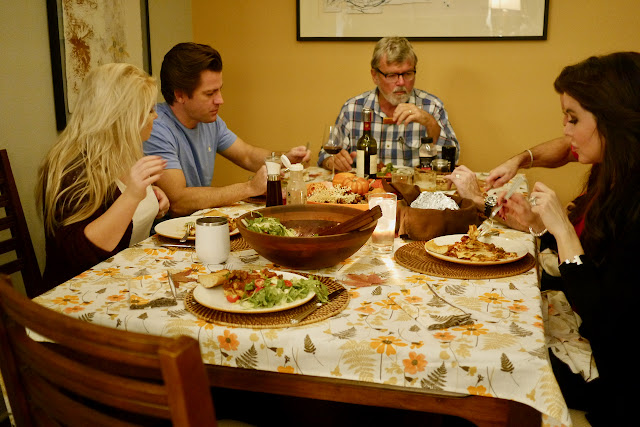 Many thanks to my sister Lisa for the awesome tablecloth that I decorated with some Autumn leaves I'd dried from our time in Vancouver. The cake was mostly saved by tasting good, and looking somewhat better with whipped cream on top.

Bruce went fishing on Thanksgiving morning and I took my time getting into the kitchen. Too much time, as it turns out. Yikes!! I made the pie crusts, put them in the fridge to chill, and began preparing the apples. To make a long story short, I forgot the flour and that explained why the pie did not bubble up and over, something I'm accustomed to. 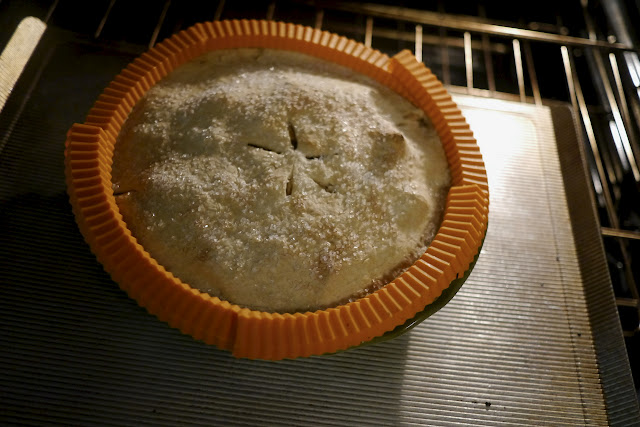 No flour? Way too much liquid in the pie. Whereas my lasagna was too dry, the pie was too wet. Then the turkey took longer than I'd anticipated. I was guilty of something I was teaching Bruce about while on our trip. I told him that the old adage is, "a watched pot never boils." I'm here to tell you from experience that the a watched turkey never cooks! That said, we eventually ate that night, with plenty of turkey and dressing leftovers that were more than "just okay."

While the turkey was cooking Bruce moved into his new vehicle and we took it out for a spin yesterday, heading down Narcoossee Road to 1-92, on our way to see another state park. There are a crazy amount of features in new cars, including ours. We tried out the navigation system and it is so much easier to use! 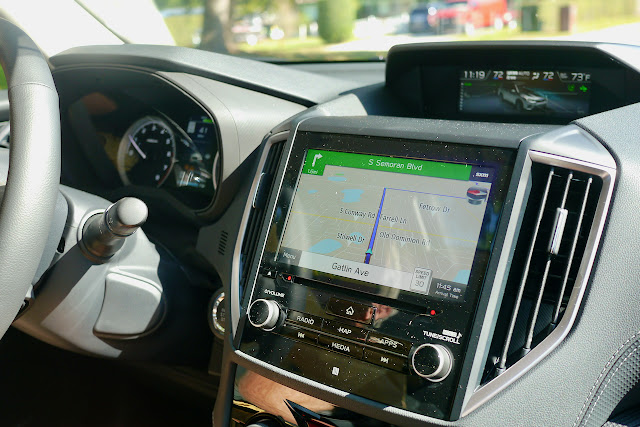 Sensors to keep you driving straight, back up cameras, blind spot cameras, and more. I realized I neglected to take a shot of the exterior which I will do soon enough. This was not the kind of road a person would normally want to take with a day old car, 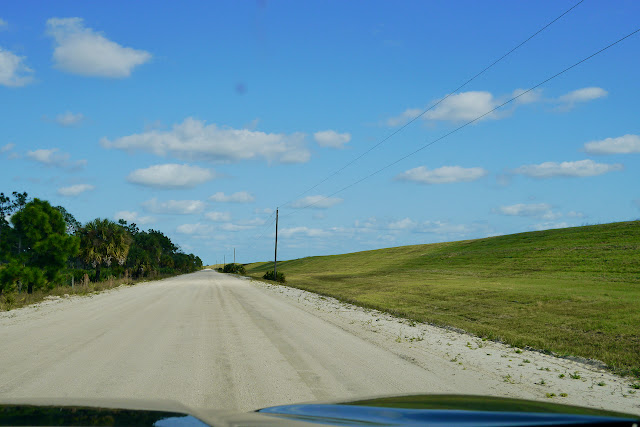 however, Bruce was a good sport about it. St. Sebastian River State Park was not exactly what we were expecting with this huge dyke beside the road. Eventually it came to an end, and here's something interesting we saw. 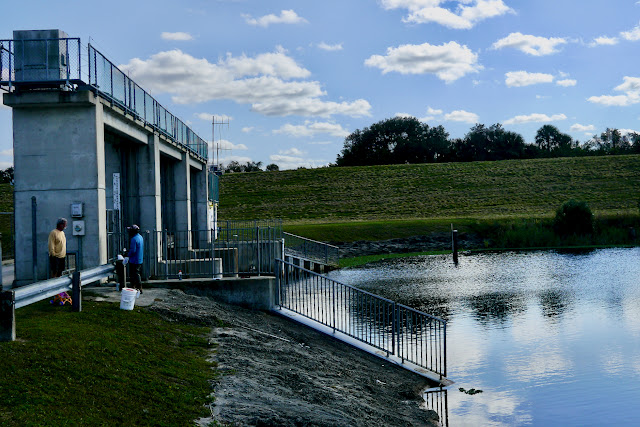 That would be Bruce in the gold shirt talking to a man who told us that on this side of the sluice (?), it is fresh water, while the side below is salt water. 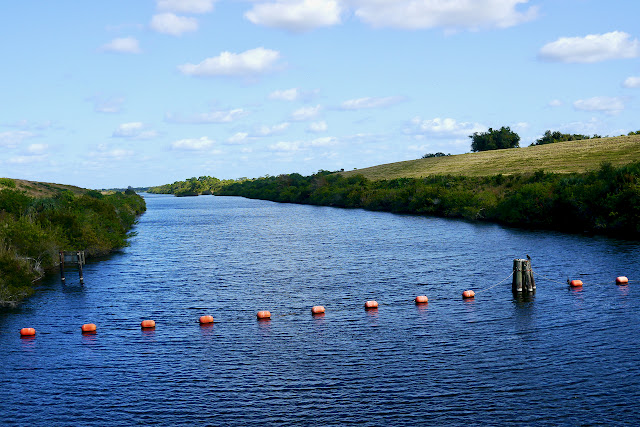 Heading back the way we came, we made our way through a very cute town, Fellsmere, before arriving at the Atlantic Ocean. BTW, we spent no time in Fellsmere, however it might be worth revisiting.The provided link has some very interesting information, including that it is the first place in Florida where women were allowed to vote! Anyway, we checked out the Sebastion Inlet State Park before stopping for a short rest at Melbourne Beach where the water was exquisite in the early evening light! 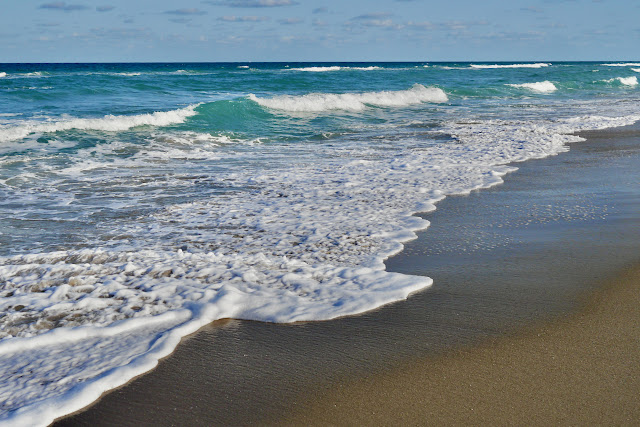 Can you just feel that foam on your feet?? Had we been in the old car I would have taken my shoes off for a feel, but on this day, I resisted the temptation. There were plenty of folks out enjoying the mild weather. 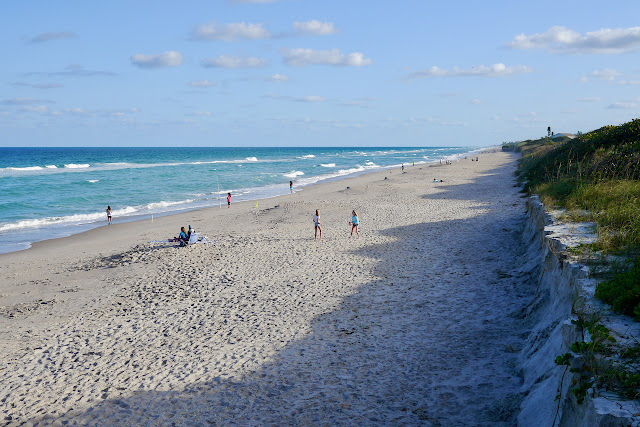 Not only did a flock of pelicans fly over my head, 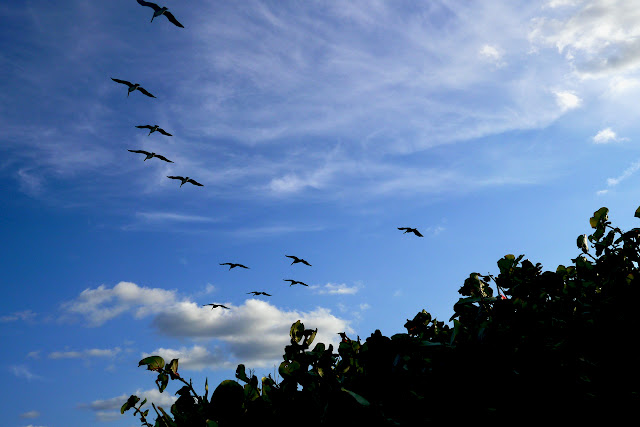 there was a very interesting 3-D mural commemorating Juan Ponce de Leon landing in Melbourne Beach. Designed by local artists, each tile was painted on copper by school children. 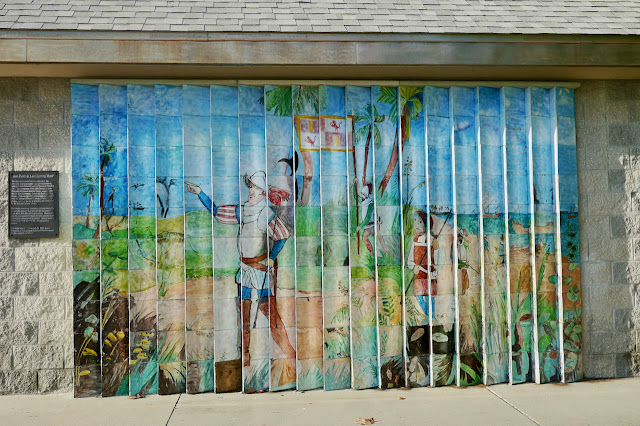 In what we hope will be many trips in the new Subaru Forrester, we arrived close to home as the sun was setting on the day after Thanksgiving. 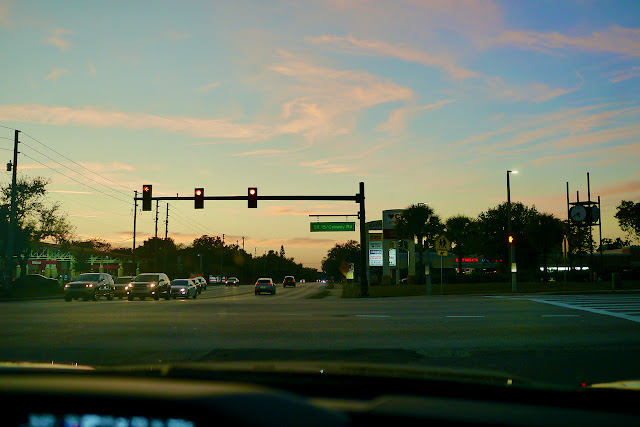 Indeed, we have so very much to be thankful for.