Welcome to my tour stop! Check out this new release and read an excerpt below... 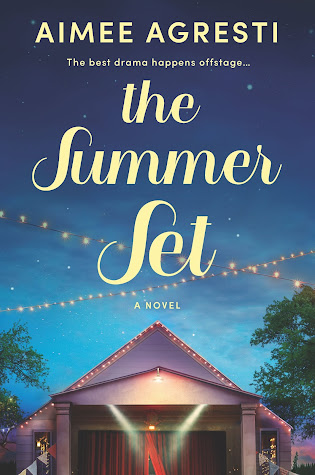 With a setting inspired by the real-life Williamstown Theatre Festival in the Berkshires where stars like Bradley Cooper, Gwyneth Paltrow, Lauren Graham, and Chris Pine have performed, THE SUMMER SET (Graydon House Books; May 12; $17.99) is a salacious rom-com, beach read perfect for Broadway nerds and Hollywood gossips alike.

Charlie Savoy was once Hollywood's hottest A-lister. Now, ten years later, she's pushing forty, exiled from the film world back at the summer Shakespeare theater in the Berkshires that launched her career—and where her first love, Nick, is the artistic director.

It's not exactly her first choice. But as parts are cast and rehearsals begin, Charlie is surprised to find herself thriving: bonding with celebrity actors, forging unexpected new friendships, and even reigniting her spark with Nick despite their complicated history.

Until Charlie's old rival, Hollywood's current “It Girl,” is brought on set, threatening to undo everything she's been working towards. As the drama amps up both on the stage and behind the curtains, Charlie must put on one heck of a show to fight for the second chance she deserves in her career and in love. 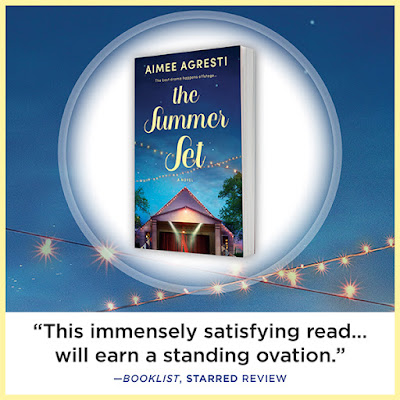 2
I MISSED YOU TOO

Charlie studied herself in her bathroom mirror. In just a week her bruised eye had faded to the dull gray of rancid meat, now easily disguised by concealer. She flat-ironed her raven hair, securing it in a sleek, low ponytail, then rummaged the closet for her most professional-looking getup: that slim black suit, pale pink silk blouse with the bow at the neck and the stilettos she only wore when she felt compelled to impress. Her wardrobe from that perfume ad a decade earlier but timeless nonetheless, just like the moniker that had been etched in script on the curved bottle of the fragrance.

Outside, Boston did its best impersonation of her supposed hometown, London. (Though she had lived away from there enough during childhood to have eluded the accent.) The dreary May rain made her think of her mom: the estimable Dame Sarah Rose Kingsbury. News of Charlie’s incident had warranted mentions in a few celebrity weeklies and, unfortunately, made the hop across the pond. Her mother had called, texted and finally, after no response, emailed: Charlie, Did you receive my voice mail and text? I trust you’re alright. Another of your stunts? Please respond. Love, Mum. Her mom’s correspondence always scanned like a telegram, full of stops and full stops—much like their relationship itself. Charlie, reveling in being briefly unreachable and not in the mood to answer questions, hadn’t yet bothered to replace her phone and had indeed missed the call but wrote back assuring her mom that she was fine, though the accident had not, in fact, been performance art.

By the time Charlie reached the foreboding Suffolk County Courthouse, her lawyer/friend Sam—who had shepherded her through the theater purchase (while questioning her sanity)—was already there pacing, barking into her phone.

“This should be easy,” Sam told her, hanging up, hugging her while scrolling her inbox. Sam wore suits and radiated responsibility, two things Charlie found comforting in a lawyer. “Be contrite and it should be open-and-shut for community service.”

The sterile courtroom’s pin-drop silence made Charlie shiver. Next to her, Sam tucked her phone in her bag and rose to her feet, gesturing for Charlie to stand as the judge materialized at the bench. Charlie found it oddly reassuring that the judge was the kind of woman who wore pearls and a frilly collar outside her robe.

“You were okay with my email, right?” Sam whispered, as they sat again.

“What email?” she whispered back.

“My email. An hour ago? You have got to get a new phone,” Sam scolded.

“There was this arrangement, last minute, I hope you’ll be amenable to but—”

The judge had begun speaking, so Sam hushed her. Too late.

“Ms. Savoy, this is the part where I get to talk.” The judge looked up from the paper she had been reading aloud. “Maybe it was different in your episodes of Law & Order?”

“No, ma’am, I mean, Your Honor, sir, ma’am, no,” Charlie stumbled. She had been wrong about the judge. The woman continued on about the damage Charlie caused and the significant hours of service required like Charlie was the honoree at one of those Comedy Central roasts, albeit one that could end with her in a jail cell.

Until finally, the judge cut to the chase: “…an assignment has presented itself,” she said slowly. “Which will make fine use of Ms. Savoy’s expertise…” Charlie caught Sam’s side-eye. “So Charlotte Savoy shall be required to complete sixty days with the Chamberlain Summer Theater in—”

“NO!” Charlie expelled the word, an anaphylactic response. The judge scowled as though jail might still be an option. “Sorry, Your Honor, I just mean—can I object?” Sam shot her a lethal glare. “It’s just that, well—” Charlie tried again as a door at the back of the courtroom creaked open, footsteps echoing. She turned to discover the equivalent of a ghost.

“Mr. Blunt, thank you for joining us,” the judge said, unimpressed.

Charlie’s posture straightened, heartbeat ticking faster than seemed medically sound. She felt betrayed by her own being, muscles, nerves, ashamed of this reaction.

“Sorry, Your Honor,” he said in that deep rasp.

Charlie wished she hated that voice. And it seemed an abomination that he could still be attractive—physically at least.

Rugged with an athletic build, he wore black jeans, a blazer and aviator sunglasses, which he pulled off as he walked (pure affectation since, to her knowledge, it was still raining outside), tucking them into the V of his slim sweater.

He took his place beside Charlie, flashing that smile he deployed when he aimed to be his most charming.

“Hi there,” he said, as though surprised to be meeting this way.

“Shouldn’t you be wearing a cape?” Charlie rolled her eyes, focused on the judge reading again, and returned her body to its proper slouch, recalibrating her expression between boredom and disgust.

“I missed you too, Charlie,” he whispered back.

From the corner of her eye, Charlie spotted the sharp beak of that tattoo—the meadowlark—curving around from the back of his neck. It was still there, which gave her a pang of affection, a flare-up she forced herself to snuff out. She imagined how they might look to those few people sitting in the rows behind them. Nick and her with these identical birds inked onto the backs of their necks, midflight and gazing at each other anytime he stood on her right side, as he did now. Mirror images, bookends, the birds’ once-vibrant golden hue as faded as the memory of the hot, sticky night she and Nick had stolen away from campus to get them together.

Over the years, she had considered having hers removed or morphed into some other design, but why should she? She liked it. At face value. Charlie sighed again, more loudly than intended, as her mind sped to how this summer would now be.

“Ms. Savoy, is there a problem?” the judge asked, irked.

“Your Honor, I just wondered—is there a littered park or something? Instead?”

“Ms. Savoy will report to service June 1.” The judge slammed the gavel, which, to Charlie, sounded like a nail being hammered into a coffin.

“I had a client last week who’s cleaning restrooms at South Station this summer,” Sam said apologetically as they walked out.

Charlie just charged ahead down the hall, an urgent need to escape, her mind struggling to process it all.

“So, craziest thing happened,” Nick launched in, catching up to them at the elevator. “I was reading the news and saw about your little mishap—” He sounded truly concerned for a moment.

“Don’t pretend like you don’t have a Google alert on me,” Charlie cut him off, stabbing the down button too many times.

“You always were a terrible driver—”

“But a stellar swimmer—”

She nodded once. She couldn’t argue with that.

“Don’t be fooled by…that.” She waved her hand back toward the courtroom. “You need me more than I need you.”

“We’ll see about that.” He let them on first. Charlie hit the button again-again-again to close the doors, but he made it in. “How long has it been, anyway?”

“You know how long it’s been,” she said as the doors closed so she was now looking at their reflection. It had been six years, three months, two weeks and two days since they last saw each other. At the long-awaited premiere for Midnight Daydream—which should’ve been a thrilling night since a series of snags had pushed the film’s release date back two years after filming. But instead of celebratory toasts, it had ended with a glass of the party’s signature cocktail—a messy blackberry-infused bourbon concoction the shade of the night sky—being thrown. In retrospect, she thought, there’d been so many signs the movie was cursed.

“You’re just mad your self-imposed exile is over.” He smirked.

Sam scurried out ahead of them. “My work here is done. I’m sure you two have a lot of catching up to do.” She gave Charlie an air-kiss before striding off.

“Wait, no, I just need to—” Charlie tried to stop her, but Sam had already hopped in a cab.

“So, I have an office not too far, off Newbury Street, off-season headquarters for Chamberlain—” Nick started.

“Luckily you’re usually phoning it in, so I haven’t had the privilege of running into you around town.” She walked ahead in the cool, pelting rain.

He stayed where he was. “I’d invite you out for a drink—”

“Summer is gorgeous in the Berkshires, as you may recall,” he shouted, sunglasses back on, absurdly, and that smile again. “Welcome back to Chamberlain, Charlie. 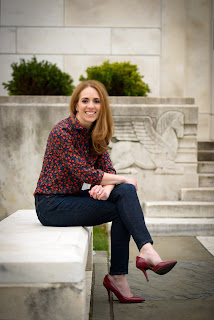 Aimee Agresti is the author of Campaign Widows and The Gilded Wings trilogy for young adults. A former staff writer for Us Weekly, she penned the magazine's coffee table book Inside Hollywood. Aimee's work has also appeared in People, Premiere, DC magazine, Capitol File, the Washington Post, Washingtonian, the Washington City Paper, Boston magazine, Women’s Health and the New York Observer, and she has made countless TV and radio appearances, dishing about celebrities on the likes of Access Hollywood, Entertainment Tonight, E!, The Insider, Extra, VH1, MSNBC, Fox News Channel and HLN. Aimee graduated from Northwestern University with a degree in journalism and lives with her husband and two sons in the Washington, DC, area.