The reveal hints at the word we're missing:

59A. His touch will complete five puzzle answers: KING MIDAS. It didn't work out quite the way Midas had planned, he didn't really think it through, did he? 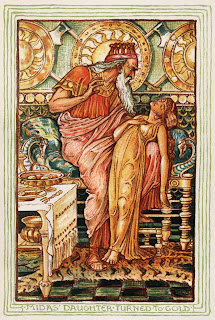 and so we find:

32A. Chance of a lifetime: [Golden] OPPORTUNITY

A slick theme from Ed. I actually saw the theme right away when I got to 17A, but it was only the symmetry with ARCHES that led me to BUZZER - I don't watch America's Got Talent and so I had no idea there was such a device as a "golden buzzer" which I discover immediately puts a contestant through to the final rounds.

1. Title critter in Blake's "Songs of Innocence": LAMB. Blake was apparently quite fond of lambs, if you look at his "Songs of Innocence" (strictly speaking, "Songs of Innocence and of Experience") there's not only "The Lamb" referenced by this clue, but a whole bunch of lamb-y lines in other poems. If you've ever seen the movie "Chariots of Fire" you'll be familiar with my school hymn "Jerusalem" which plays at the end. And references a lamb. Talented chap, lamb-centric.

9. Football's "Papa Bear": HALAS. George Halas, founder, owner and head coach of the Chicago Bears. He was also known as "Mr. Everything" in consequence.

15. __ Eats: delivery service: UBER. Their drivers are busy at the moment. Note that there's no umlaut in the company name.

19. Bobby in a 1971 #1 hit: MCGEE. Janis Joplin classic which still sounds great today. The recording was released posthumously and reached number 1 on the Billboard chart. It was written by Kris Kristofferson.

26. Stage of adolescence: PUBERTY. All angst and acne.

40. "Atlas Shrugged" writer Rand: AYN. I read this a number of years ago and I can't remember a single thing about it.

45. Lily of France garment: BRA. I had to validate, of course, that this clue/answer combination was in fact correct. After much long and painful research I can confirm that it is. You're welcome! 51. NYC area above Houston Street: NOHO. There's a NoHo in LA too, the trendy name for North Hollywood. It's a bit of an oddity, to be honest. It's so far north of Hollywood that it's across the Cahuenga Pass in the San Fernando Valley, and you have to struggle through Studio City and Toluca Lake before you actually get there.

52. Suddenly stops working, as an engine: SEIZES UP. Not a good thing to happen. My motorbike sprung an oil leak while I was riding back in 1976 and I didn't notice. Suddenly the engine went from a two-cylinder four-stroke to a single, and useless, lump of metal.

64. California's __ Valley: SIMI. It's the safest city with a population of more than 100,000 in the USA, primarily because police officers from the LAPD were given incentives to move there by the City Council.

1. W. Coast force: LAPD. Nice clue, it took me a which to see this one. In fact this corner of the puzzle was my last fill. 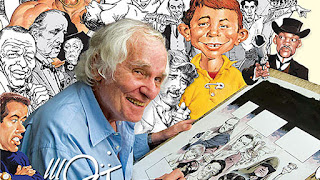 4. Bucket shaped like a sandcastle, for one: BEACH TOY. I find this clue a little odd. Would you call a bucket that's designed to make sandcastles "shaped" like one?

5. "Thank you, Captain Obvious": DUH! I love Billie Eilish's song "Bad Guy" which is so catchy and features a few "DUH"s.

7. Team that retired Mike Piazza's #31: METS. It's odd, I associate him more with the Dodgers than the Mets, but the Dodgers didn't retire his number. I remember him hitting a home run clean out of Dodger Stadium and into the parking lot, a wallop estimated to be 440 feet. 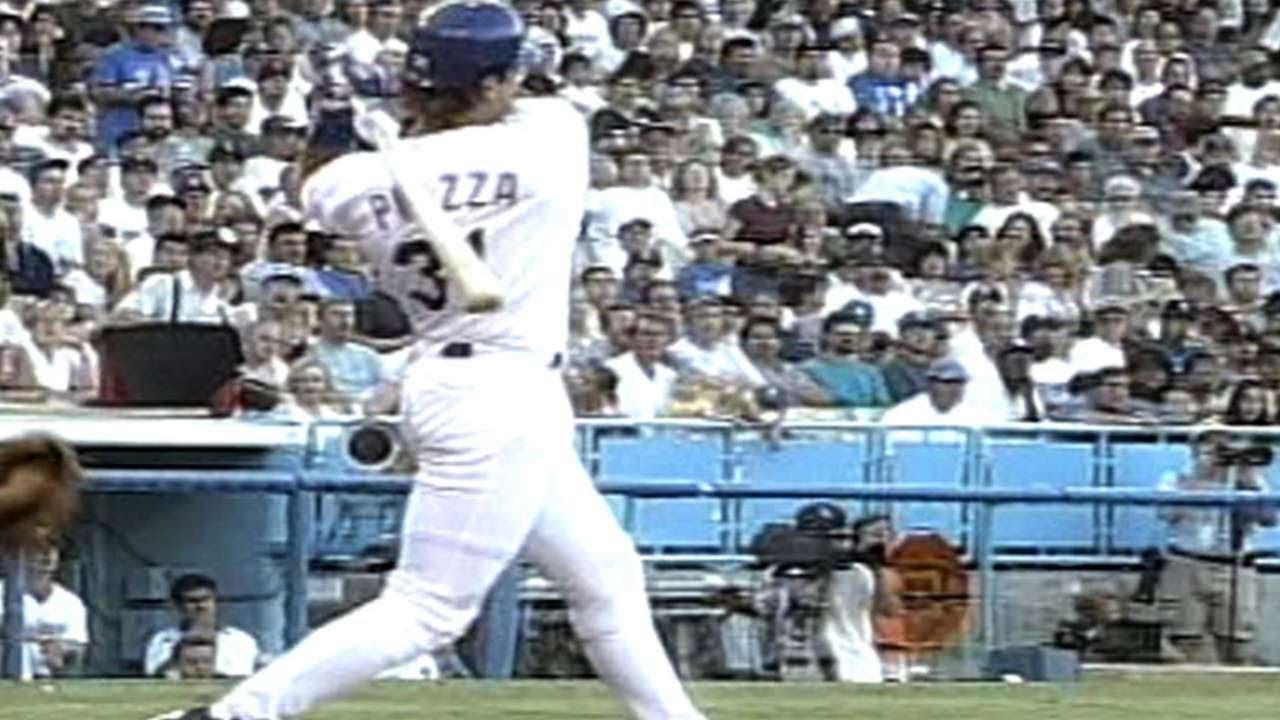 9. __ Industries: L.A. youth program: HOMEBOY. I like the salsas produced by Homeboy Grocery which are sold in my local Kroger market.

11. Ale alternative: LAGER. I bought a couple of bottles yesterday of "limited edition" Midnight Lager produced by Stella Artois. It's almost black in color. I'll report back when I've tried it.

13. Like some bagels: SEEDY. Did you know that restauranteur Joe Bastianich is credited with inventing the "everything" bagel? He was working in a bagel bakery and was tasked with putting the poppy seeds, sesame seeds and what-not on each type of bagel. At the end of his shift he decided to dip the last few bagels in the spillover of all the toppings, and bingo, the Everything Bagel was born.

25. Monet's "Cathedral Series" city: ROUEN. I once stayed in a hotel opposite the cathedral in the main square in Rouen. The bellringers started on Sunday morning 6AM, and that was the end of my night's sleep. 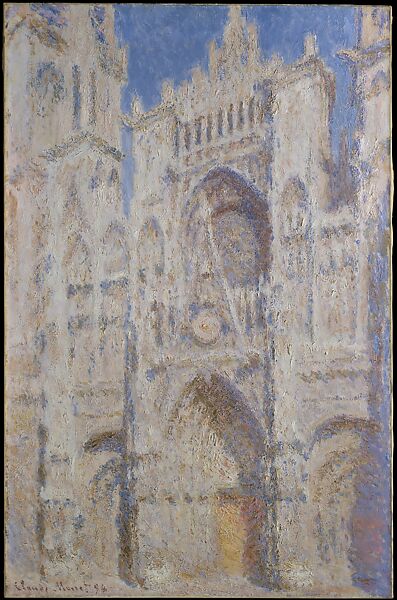 33. "The Empire Strikes Back" director Kershner: IRVIN. Thank you, crosses

34. Old apple spray: ALAR. Daminozide was banned in 1989 as a "probable carcinogen".

43. Punk subgenre: EMO. I never really got into Emo music; it seemed a little too naval-gazing for my taste.

Did you know that Notre Dame were called, variously, The Terriers, the Horrible Hibernians, The Catholics and the Ramblers before settling on the Fighting Irish moniker? I quite like the Hibernians one.

Which just leaves the grid to wrap things up: 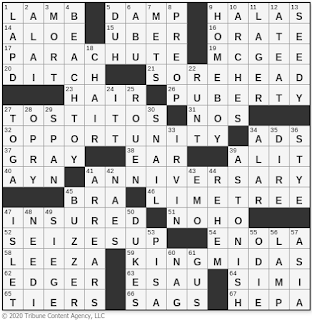