Folklore has many famous mythical creatures like unicorns, leprechauns, and wizards. They all pale in comparison to the most famous mythical beast, the dragon. Dragons have been a part of folklore and fairy tales dating back to cave drawings. Nowadays, dragons are a vital part of every fantasy movie and television show. With their legendary reputation and unique appearance, fictional dragons are often more popular than the main characters.

Historically, there have been two main types of dragons. During the Middle Ages, the fire-breathing four-legged dragon with horns and giant wings became popular in Western culture. It remains one of the most common dragons seen on TV and in movies. In Eastern culture, the dragon is also four-legged but is wingless with a snake-like body. Also known as the Chinese dragon, they’re highly intelligent and can outsmart the Western dragon. Here’s a look at 21 of the most famous dragons from pop culture. 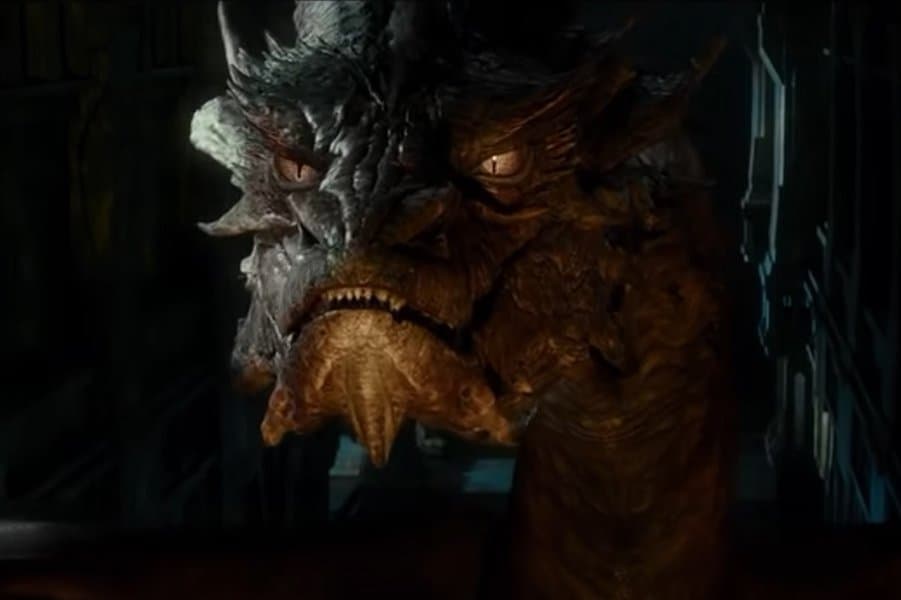 The works of J.R.R. Tolkein feature many mythical and legendary characters and creatures. However, few beasts compare with the crafty and cunning dragon Smaug. As the main villain in The Hobbit, he is a giant red-golden fire-breathing dragon with bat-like wings. Known for his love of gold, the greedy Smaug famously invaded the dwarf kingdom Erebor and stole their massive treasure.

Voiced by Benedict Cumberbatch, the arrogant and sly dragon lived happily with his treasure in Lonely Mountain for 171 years. Well, until Bilbo Baggins, Gandolf, and the thirteen dwarves set out on a quest to take the kingdom back. Despite being an evil villain, Smaug remains one of the most famous dragons in literature. 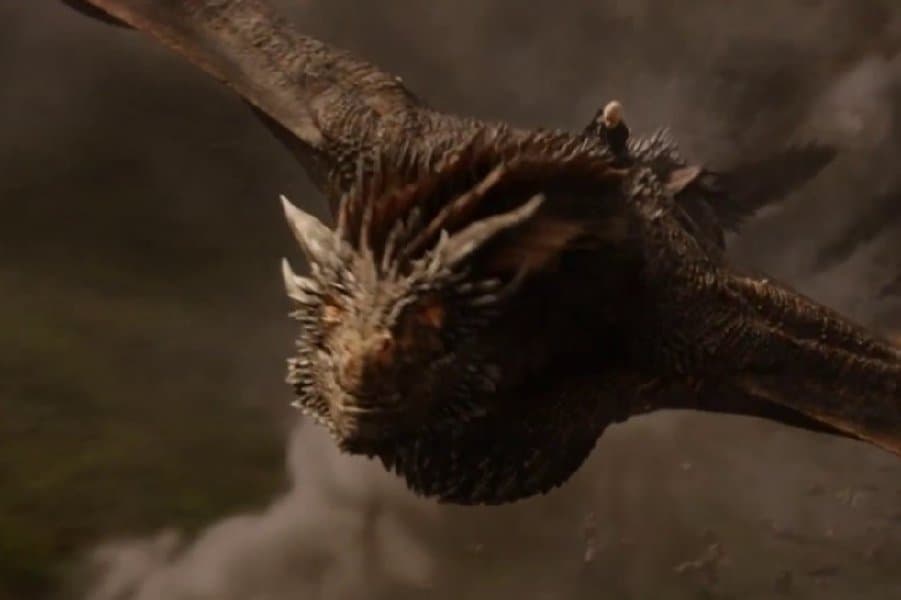 The critically acclaimed HBO series Game of Thrones took its time slowly introducing dragons. While the dragon eggs appear in season one, a fully grown fire-breathing dragon doesn’t appear until later in the series.

Currently, Drogon is the last surviving and most famous dragon in Westeros. With his piercing red-orange eyes and red-black wings, Drogon has a short fuse and tends to be forceful. At the same time, Drogon was fiercely loyal to his mother, Daenerys. As Daenerys Targaryen’s personal dragon, she rode Drogon into many epic battles, including the final destruction of King’s Landing. 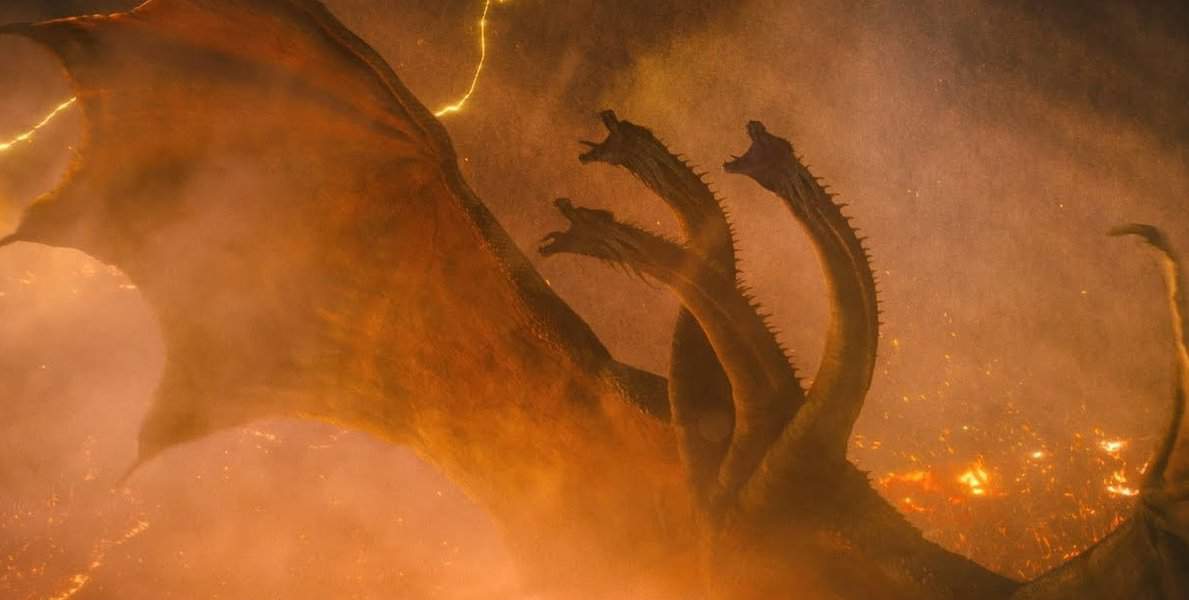 Godzilla has many enemies, but none are as evil, violent, and terrifying as King Ghidorah. The three-headed golden kaiju has giant wings, two tails, and a ferocious appetite. The monstrous beast made its first appearance in the 1964 classic Ghidorah, The Three-Headed Monster.

Ghidorah is so powerful that Godzilla needs help from old enemies Mothra and Rodan to defeat humanity’s greatest threat. In some versions of the story, Ghidorah is a god from an alternate dimension or a plant-destroying alien dragon. Either way, Godzilla’s probably going to need a lot more help. 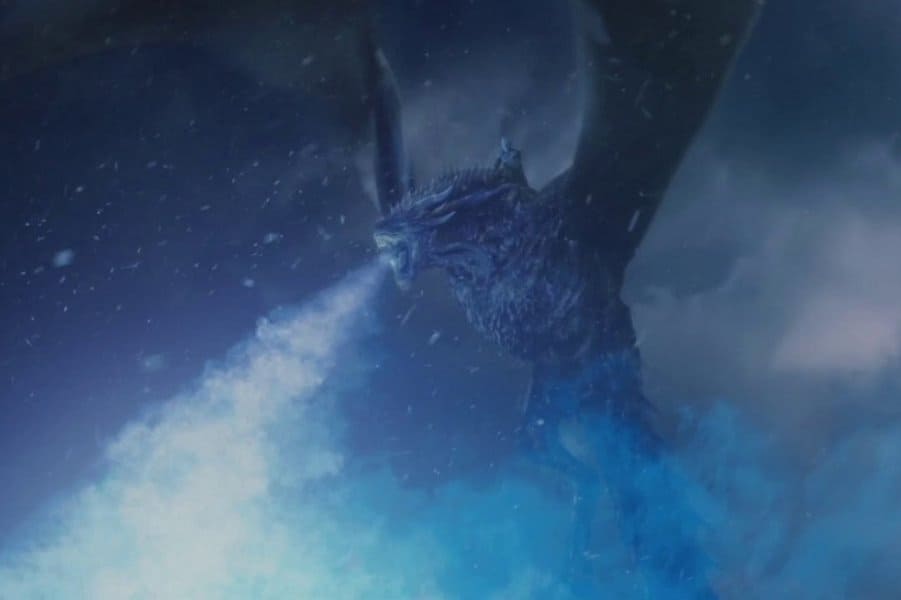 Born with his brothers Drogon and Rhaegal, Viserion was a mighty dragon with reddish-orange wings and massive gold scales. In the Game of Thrones series, Viserion became an ice dragon under the control of the evil Night King.

As an ice dragon, the fire-breathing Viserion melted The Wall into a puddle. However, Viserion couldn’t survive when his link to the Night King was broken. 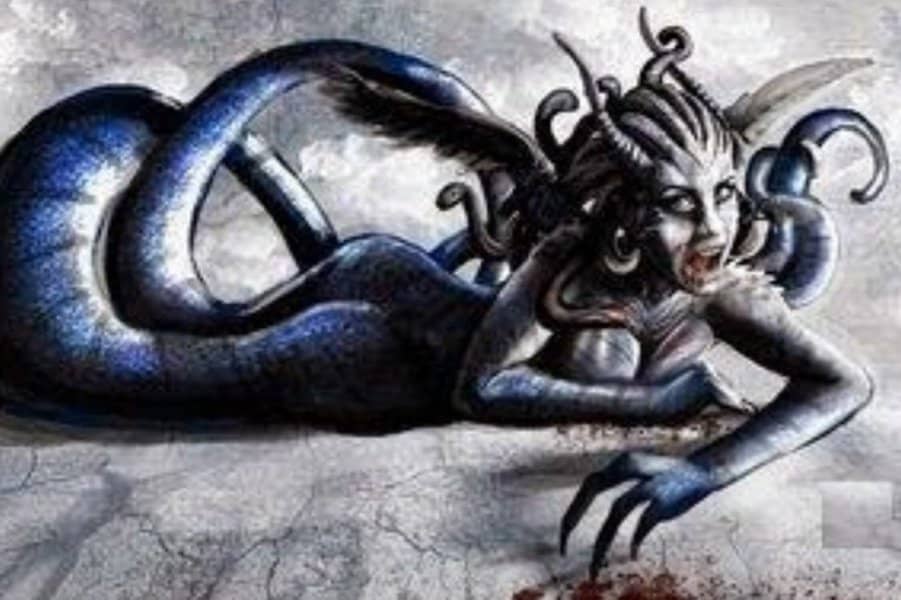 There are many horrifying characters in Greek mythology, however, the fearless Campe might be one of the scariest. Unlike most dragons, Campe has the head and upper body of a woman and the lower body of a dragon with a scorpion’s tail. If that wasn’t scary enough, she also had beasts around her waist and serpents around her legs.

Also known as a Drakaina, Campe’s main task was keeping the Cyclopes and Hekatonkheires locked in Tartarus. She’s easily one of the most powerful dragons in Greek mythology and strikes fear into the hearts of the other dragons.

As the protector of the city of Kyoto, the Azure Dragon is one of the four guardian spirits of cities in Japanese mythology. The Azure Dragon protected the West while the Black Tortoise, White Tiger, Vermilion Bird, and Yellow Dragon each watched over the other regions.

Japanese culture deeply respects the Azure Dragon, especially in Kyoto. They hold a ceremony worshipping the dragon at the Kiyomizu-Dera temple in Eastern Kyoto each year. According to folklore, the statue of the Azura Dragon at the temple’s entrance drinks water from the fountain at night. 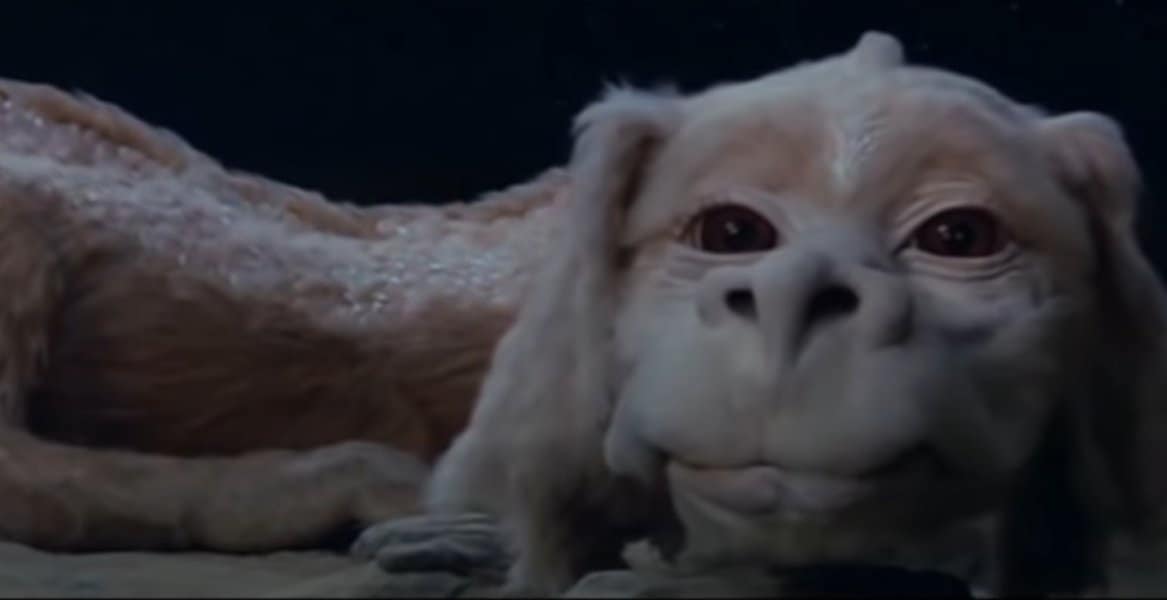 The optimistic and uplifting dragon, Falkor, is a central character in the classic 1984 movie The Neverending Story and the novel of the same name. With his kind and friendly personality, Falkor was wise beyond his years, offering insightful advice for anyone that felt lost.

Falkor often accompanied his good friends Bastian Balthazar Bux and the young warrior Atreyu on their adventures. The Luck Dragon had a distinctive appearance with the head of a lion, a bushy tail, and an elongated body. His ruby-colored eyes compliment his white scales with a pink hue. He’s also famous for having the unique superpower of luck. 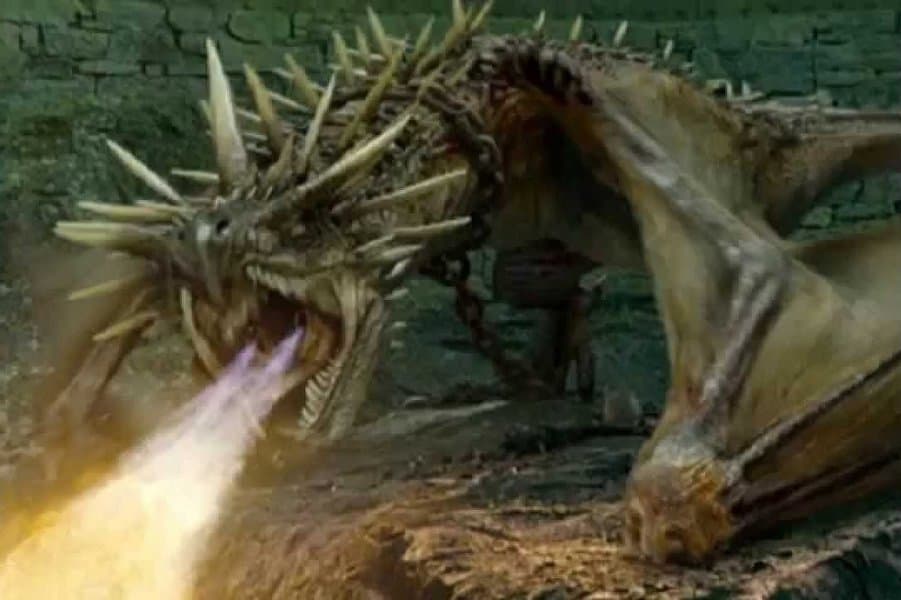 In Harry Potter and the Goblet of Fire, Harry competes in the world-famous Triwizard Tournament. During the tournament, he comes face-to-face with the most feared dragon, the Hungarian Horntail. The Horntail was one of the scariest dragons in the franchise. Harry faced many deadly beasts, but none were as terrifying as the Hungarian Horntail.

As the most dangerous dragon in the Wizarding World, the fire-breathing beast resembled a giant lizard with jagged black scales and a spiked tail. The only thing Harry found more frightening than a Horntail was having to ask out a girl to the Yule Ball. 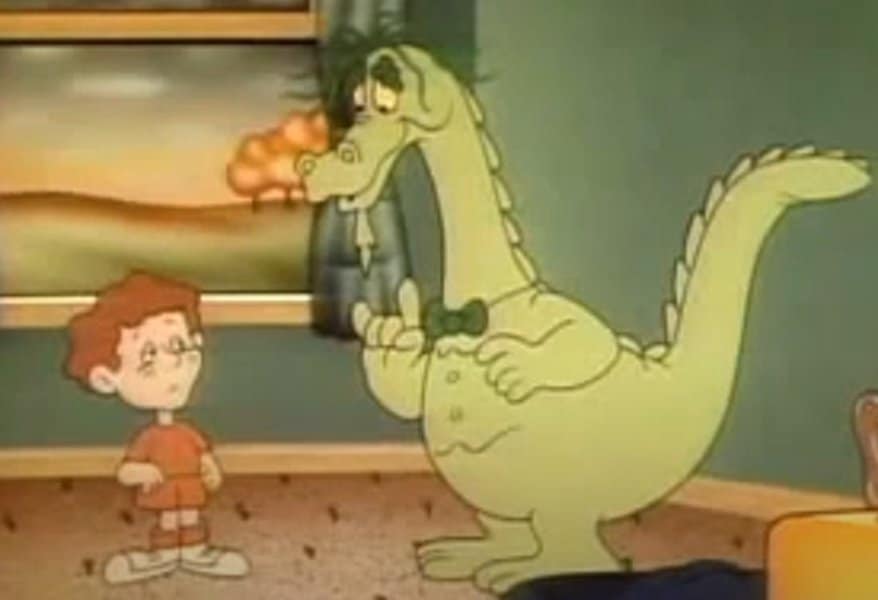 A television movie, Puff The Magic Dragon, aired in 1978, followed by two sequels. The chart-topping single became one of Peter, Paul, and Mary’s most iconic songs. 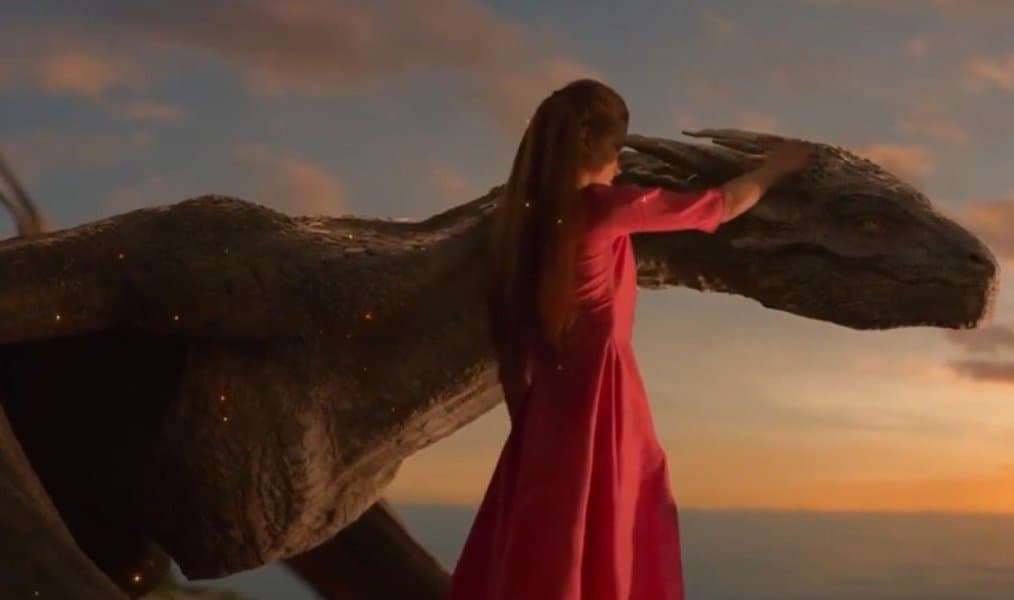 Anne McCaffrey’s Dragonriders of Pern takes a different approach to dragons. Instead of being mythical creatures that cause pain and suffering, these dragons are kind and gentle souls. They often bond closely with their rider and are loyal to the end. For instance, the famous dragon Ramoth and Lessa had an unbreakable bond.

The senior queen, Ramoth, was usually in a bad mood and had a reputation for having a short temper. As one of the most respected Queen dragons, she could be demanding and lose her cool, but she cared deeply for Lessa. 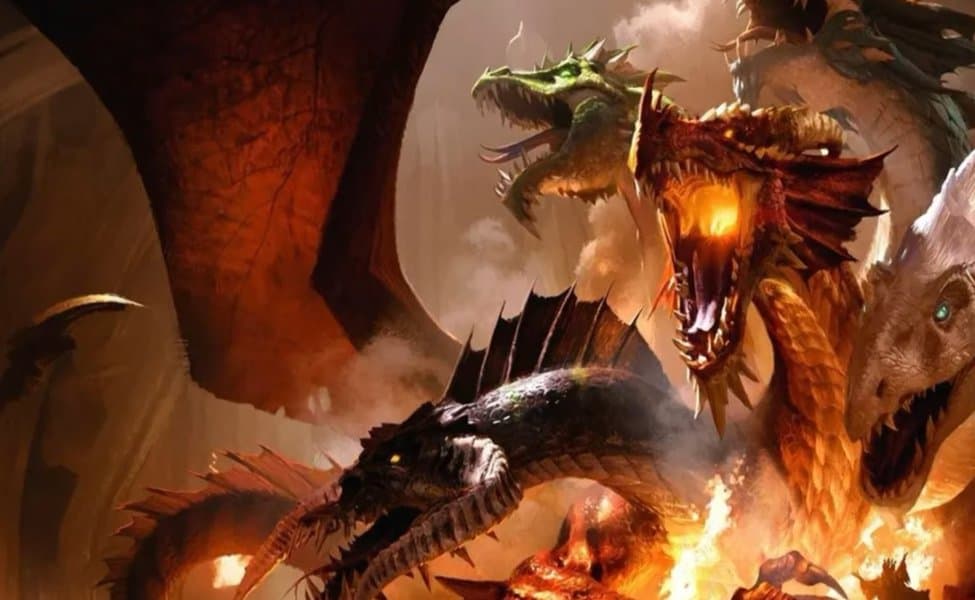 Also known as the mother of all evil dragons, each of  Tiamat’s heads represented a different dragon with its unique superpowers. She’s easily one of the most influential fictional dragons. 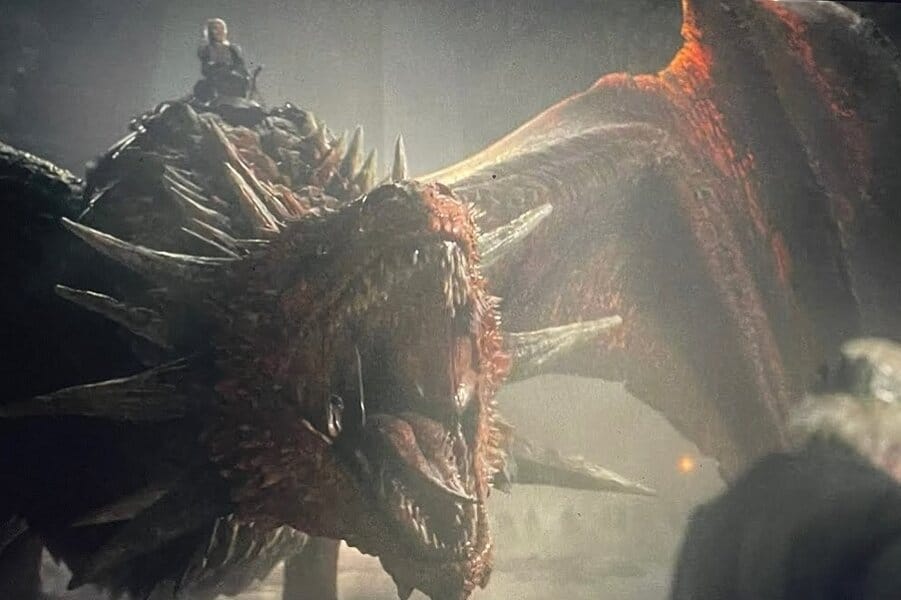 Unlike Game of Thrones, House of Dragons wastes no time introducing the fearsome dragons. The series also introduced “The Queen That Never Was” Princess Rhaenys Targaryen. A talented dragon rider, Rhayenys would mount the legendary Meleys and fly through the sky. Also known as the Red Queen, Meleys had bright red scales, vicious claws, and giant wings. She was a fearless dragon that dominated many intense battles. 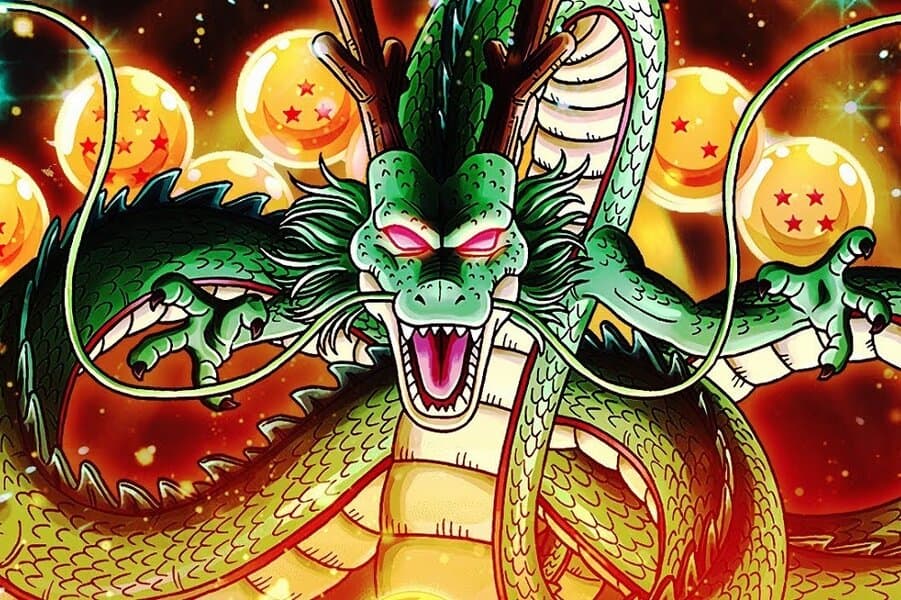 Few dragons in the Dragon Ball franchise compare to the eternal dragon Shenron. With his razor-sharp teeth, scaly skin, red eyes, and long tail, Shenron resembles a typical Chinese dragon. The kind-hearted Shenron has the unique ability to grant wishes and always tries to bring joy to the wisher’s life.

Shenron was one of the most popular dragons in the franchise and appears in Dragon Ball, Dragon Ball Z, and Dragon Ball Super. 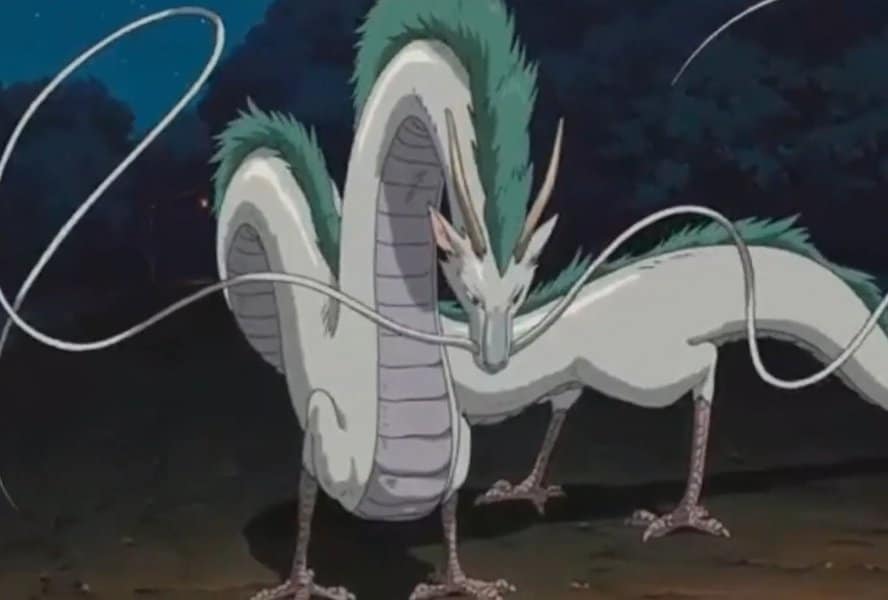 From afar, Haku appears to be a typical young boy with a bob haircut. However, beneath those piercing green-grayish eyes was a giant dragon. The 2001 classic Spirited Away follows a ten-year-old girl, Chihiro, whose parents turn into pigs after entering the spirit world of Kami. Luckily, she has the secret help of Haku to guide her on her journey.

Born Kohakunushi Nigihayami, Haku is actually a river spirit resembling a giant dragon in its normal form. He helped Chihiro become stronger, independent, and fearless. The movie was a massive success and remains one of the most popular animated movies. 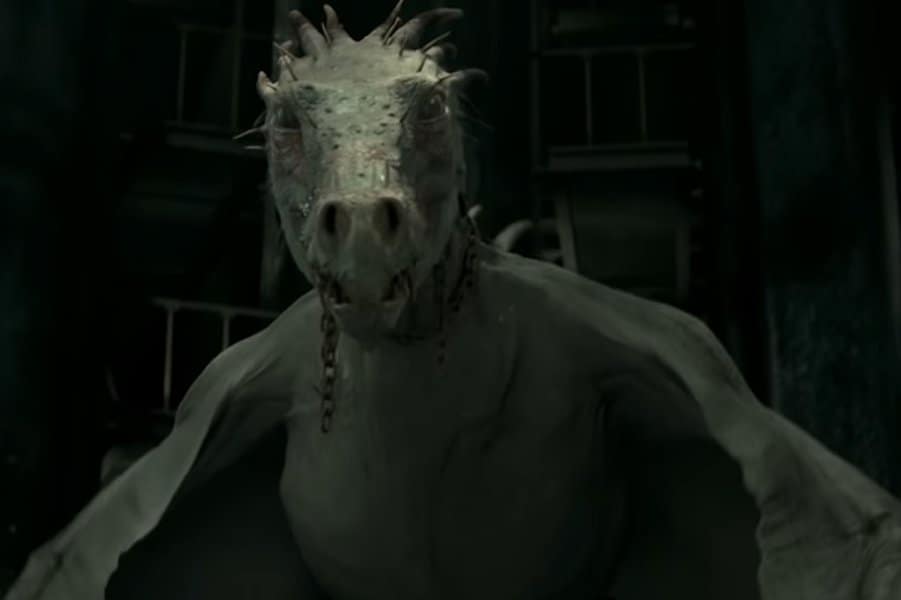 The Wizarding World features a long line of mythical creatures, but none compare to the dragons. With its long talons, giant wings, and steel-like scales, the Ukrainian Ironbelly was the most enormous and feared dragon in the universe.

In Harry Potter and The Deathly Hallows – Part 2, Harry, Hermione, and Ron encounter an Ironbelly guarding the Lestrange vault. Weighing roughly six tonnes, with terrifying red eyes, the Ironbelly was the ideal guard. Don’t let the Ironbelly’s slow pace and plump appearance fool you; it’s one of the most dangerous dragons in fiction. 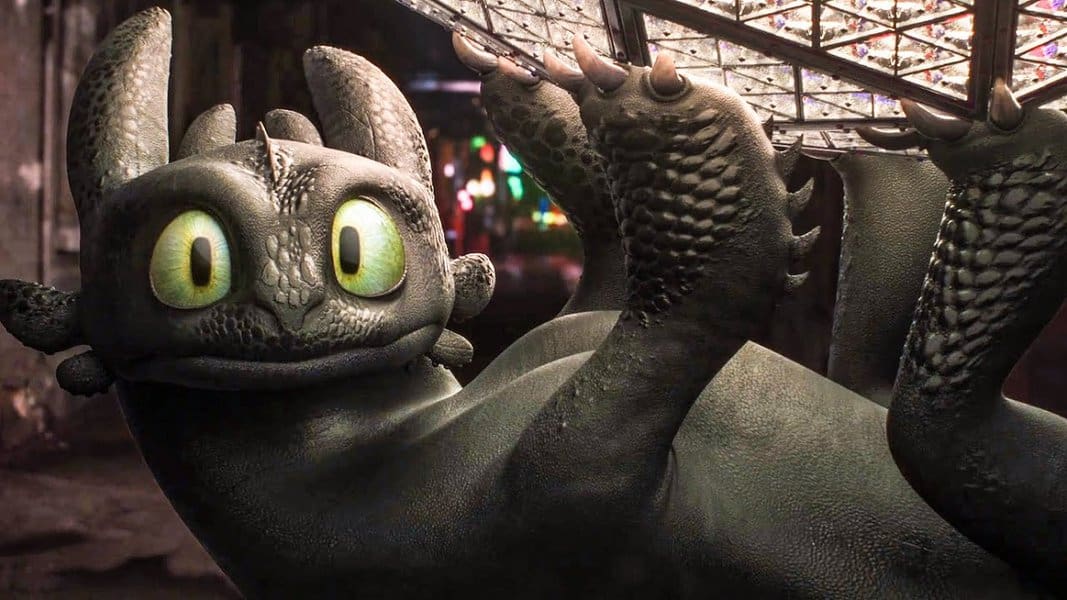 The 2010 movie How to Train Your Dragon followed Hiccup, who dreamt of being a dragon slayer like the other Vikings. He gets that chance when he injures a rare Night Fury, Toothless. Unable to bring himself to kill it, Hiccup and Toothless become the best of friends.

The easily offended Toothless was loyal and overly protective of his human friend. As one of the fastest dragons, Toothless looked like a gecko with a jet-like body and giant bat wings. 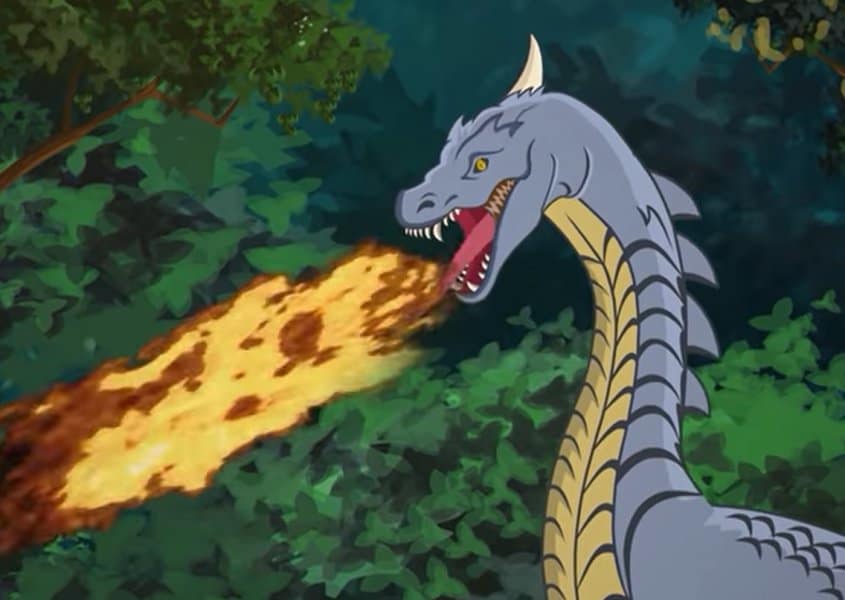 The tale of St. George and the Dragon has existed for centuries in various cultures. During the Middle Ages, the legend spread and became a part of Christianity. Therefore, several versions of the story exist, but the hero always slays the dragon in all variations.

According to legend, The Dragon terrorized a small village demanding gifts and animals. Eventually, the town started offering up humans to appease the Dragon. However, everything changed when a Princess was the next sacrifice. That’s when St. George came swooping in to save the Princess and slay the Dragon. 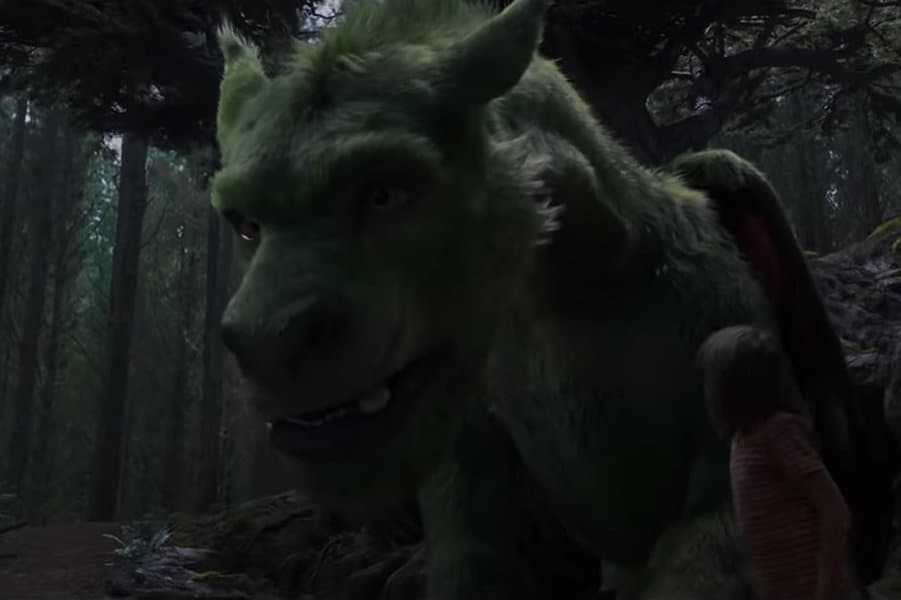 A young orphan, Pete, becomes best friends with a dragon he names Elliot. They form a close friendship and an unbreakable bond in the classic Disney story Pete’s Dragon. In the 1977 animated film, Elliot had pink hair with green scales and purple spikes running down his back.

Elliot had a drastically different look in the 2016 live-action remake. He resembled a traditional dragon and lost his trademark pink hair. In both versions, Elliot’s the guardian of children and can disappear at will. 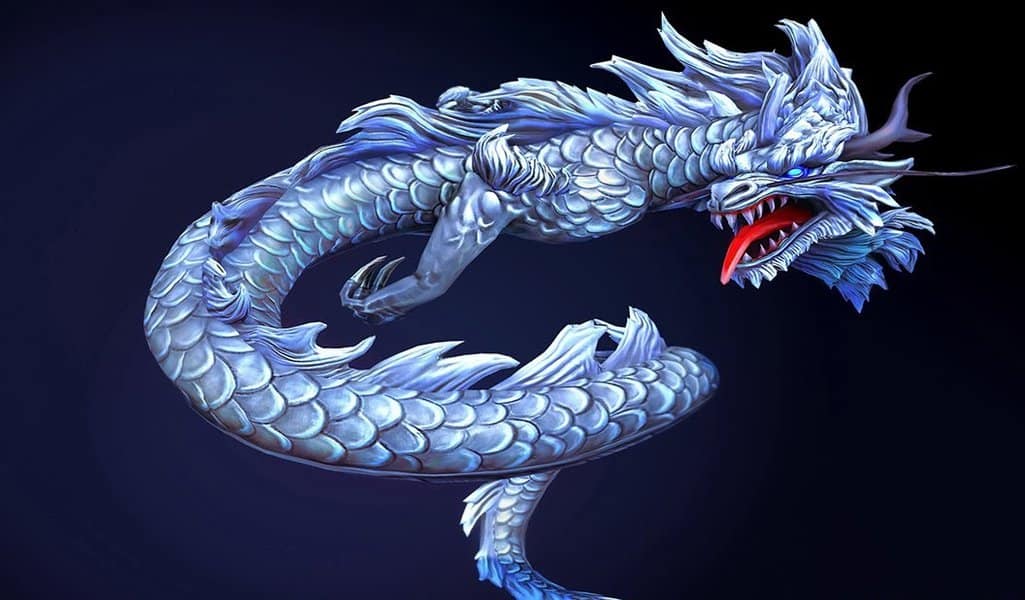 In Chinese mythology, Ao Guang was one of the four Dragon Kings that protect the sea surrounding China. Also known as the Dragon God, Ao Guang watches over the East Sea. Au Guang plays a significant role in the 16th-century novel Investiture of the Gods, wreaking havoc with devastating disasters, including storms and droughts.

The monstrous dragon also appears in the classic novel Journey to the West. In the story, Au Guang possesses a magical gold iron rod, which the monkey king Sun Wokong wishes to obtain. Along with the three other dragon gods, Au Guang was one of the most famous in Chinese mythology. 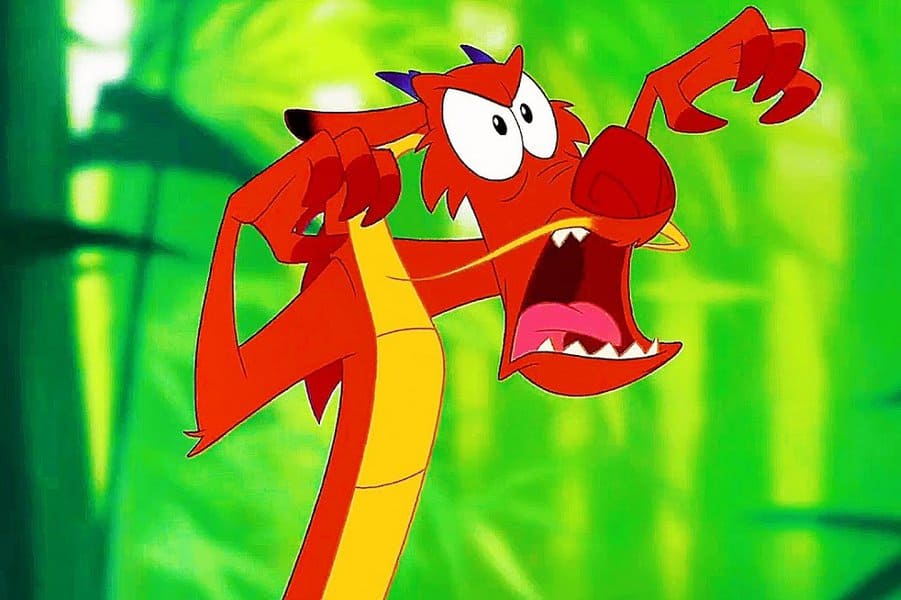 While most dragons are monstrous beasts with violent tendencies, Fa Mulan’s sidekick Mushu was a different creature altogether. Appearing in the 1998 Disney film Mulan, Mushu was a reddish-orange dragon with blue horns and a bony body. Despite being Mulan’s buddy, Mushu was selfish and a troublemaker. On the other hand, he was also brave and proved to be a good friend.

Voiced by Eddie Murphy, the goofy and lovable Mushu was an incense burner who hoped to regain his position as a guardian spirit. 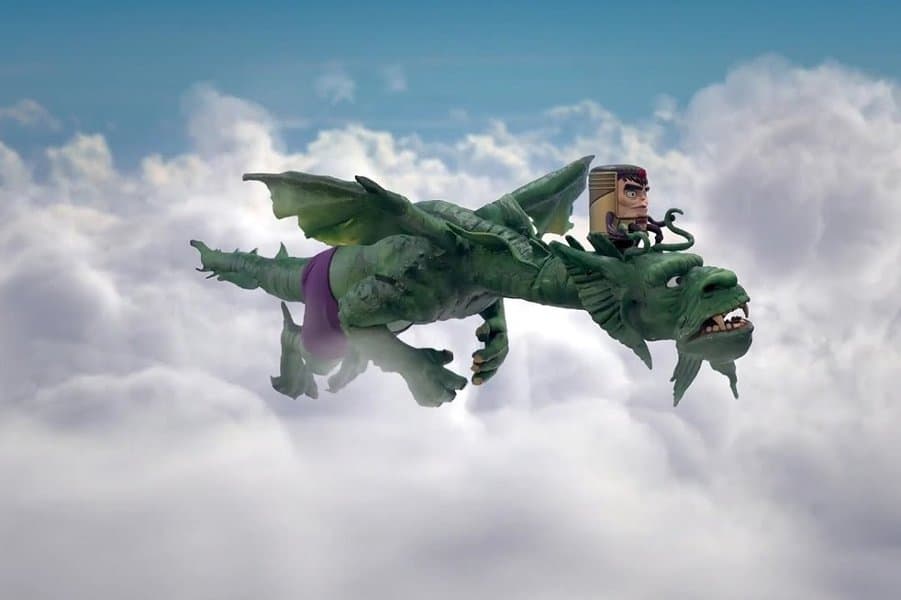 Most dragons are already dangerous, thanks to their ability to breathe fire. However, Marvel Comics Fin Fang Foom takes the term dangerous dragon to a whole new level. Fin Fang Foom was an alien creature resembling a dragon that crashed in Ancient China.

It appeared to be a typical three-fingered flying dragon, but this creature was not an ordinary dragon. In addition to flight and super-strength, he’s an intelligent telepath with the ability to shapeshift. Plus, he had access to alien technology, setting him apart from the rest of the dragons.