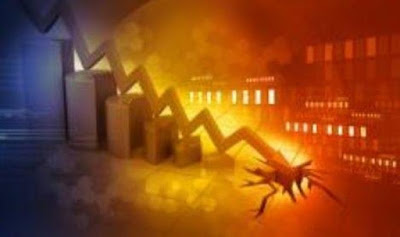 "A Can Too Big To Kick"
by Egon von Greyerz
"There are lies, damned lies, and economists. Whether these economists work for the government or a bank, they spend all their time on the computer extrapolating current trends with minor adjustments. If you want to understand the future, don’t spend your life preparing and constantly revising an Excel sheet with masses of economic data. Collective human behavior is extremely predictable. But not by spreadsheet analysis but by studying history.

History Is A Better Forecaster Than Economists: There just is nothing new under the sun. So why is there so much time and money wasted around the world to make economic forecasts that are no better than a random job by a few chimps? Instead, give some lateral thinkers a few history books and let them study the rise and decline of the major empires in history. That will tell them more about long term economic forecasts than any spreadsheet.

After a 50 year decline of the US economy and the dollar, we still hear about the V-shaped recovery being imminent. On what planet do these people live who believe that a world on the cusp of an economic and social collapse is going to see a miraculous recovery out of the blue. This is the problem with a system that is totally fake and dependant on constant flow of stimulus even though it has zero value. Most people are fooled and believe it is for real.
All Empires End With Collapsing Currency And Surging Debts: We are now in the final stages of the end game. The end of the end could be extended affairs or they could be extremely quick. Most declines of major cycles are drawn out and this one has lasted half a century. During that time the dollar is down 50% against the DM/Euro and 78% vs the Swiss franc. And US debt has gone up 65x since 1971 from $400B to $26T. A collapsing currency and surging debts are how all empires end.

But the end of the end has also been drawn out and started in 2006 with the Great Financial Crisis. The financial system was on the verge of collapse in 2008 but was miraculously rescued with tens of trillions of dollars in printed money and guarantees. Central banks have since then frenetically kept the party going by manufacturing worthless paper money. The music should have stopped in 2008 but the participants are still dancing on the grave of a system that is about to succumb.

The degree of the coming disintegration of the world economy will only be known with certainty by future historians. What is clear though is that we are seeing the end of a major cycle. What we will experience next is not just the fall of one nation but of most nations on earth, both advanced and developing countries. Debt is a global problem that virtually every country is seriously affected by. When the financial system crumbles so will world trade.
Modern Monetary Theory Or Just More Money Theory: So can the current economic collapse be stopped by MMT (More Money Printing)? Hardly! In 2007-9 the Fed, ECB and other central banks managed to kick the can down the road for a decade which is remarkable bearing in mind how near the system then was to total collapse. But this time the can is just too big and no kicking will dislodge it.
No One Is Prepared For The Coming 95% Fall In Stocks: At some point the biggest asset and debt bubble in history will implode. The debts, which no one can repay, will be worth zero. And all the assets that were artificially inflated by this Asset Bubbles can only end in one of two ways: Either they Implode or they Explode The principal bubbles we are here talking about is the financial system, stock markets, bond markets, and property. So in principle, we are looking at two options for this era to end. The net result is always the same although the Explosion finale will be the more violent and lead to a quicker massacre than the Implosion.

There will be very little or no money in circulation since the banking system will fail. Stocks are likely to decline by 95% in real terms. This might sound like scaremongering and highly incredible. But we must remember that in 1929-32, the Dow lost 90% and it took 25 years for the Dow to regain the 1929 level, and that was with inflation. Today, the situation is exponentially worse, both for the US and the world, whether we look at debt, asset bubbles, currencies or derivatives. Thus a 95% fall in real terms is certainly very likely. This means of course that many stocks will go to zero and most companies that are highly leveraged will not survive.
Explosion: The risk of an Explosive end is very high. That would most probably involve acute problems in the banking system leading to a major bank defaulting, say Deutsche Bank. This would spread throughout the whole banking system like wildfire and obviously also affect the derivatives bubble of $1.5+ quadrillion. It would happen so quickly that central banks wouldn’t be able to print money fast enough to stop it. In any case, the whole financial world would know at that point that any freshly printed money would have ZERO value and therefore ZERO effect.
An Explosive outcome of this 100-year bubble-era would clearly be cataclysmic for the world. It would lead to a global deflationary depression of a magnitude never seen before. It would also take life back to a level of devastation and deprivation that would be unimaginable today.
Implosion: The only difference with an Implosive outcome is that it would take longer and therefore involve both hope and pain as desperate central banks create trillions and quadrillions of worthless dollars, euros etc to temporarily keep the balloon inflated. Even though this process would be more drawn out, it would also fail in the end. First, there would be a brief period, maybe a couple of years, of hyperinflation before it would end in a deflationary collapse.

So these are the two options. There is absolutely nothing that can stop it. Well, we always have Deus ex Machina of course. Yes, miracles can always happen and the world would certainly need one this time. But sadly the odds are not in favor of these kinds of wonders.

What We Know: Coronavirus is a convenient excuse but not the cause of the current problems. CV was a catalyst but the real crisis this time started in Aug-Sep 2019 with the Fed and ECB panicking. The real problem is excessive debt at all levels of the economy, sovereign, corporate, financial, and personal. Governments and CBs have created the debt and are now desperately trying to remedy their mistake by doing more of the thing that created it all. As Einstein said, “We cannot solve our problems with the same thinking that we used when we created them”. But CBs have no other tools. Rates are already zero and making them negative means you would have to pay for lending money to a bankrupt borrower.

Unemployment is currently in the 100s of millions globally. Many people now earn more by not working and would be allergic to having to work for the money in the future. Also, a high percentage of the lost jobs will not come back in the world. 46 million Americans, almost 30% of the US workforce, have filed unemployment claims since CV started. ILO (International Labour Organization) estimates that almost 50% of the world’s labor force, in particular in developing countries could lose their jobs.

Businesses, big and small, are failing. 1000s of companies are going under in all sectors. Total losses will easily be in the $trillions. As an example, the whole travel industry is on the verge of a total collapse. Carnival the cruise business just announced a $4.4 billion loss and the sale of 6 major cruise ships. Airlines and hotels are either going under or losing fortunes. Global tourism is a $5T market and with indirect support businesses making a $9.2T contribution to global GDP. Just imagine, here is an industry that represents 11% of global GDP that is hemorrhaging and will not recover in this decade at least. Another example is the Swiss watch industry which is important to the country. It lost 81% of exports in April and 68% in May compared to 2019. Another sector which will never be the same.

Bad loans surging as companies and individuals can neither afford to pay interest or installments. In the US, it is estimated that no payments have been made on over 100 million loans. Half of Americans consider selling their houses to survive financially. Most Americans don’t have savings to cover more than two weeks of spending.

Global printing presses are working 24/7 to save the world from perdition. Since CV started, the total fiscal and monetary stimulus so far is $18T. The $18T stimulus could easily double. But “just” $18T is a massive 22.5% of global GDP. The 6 biggest money manufactures are:

The above list of problems is just an example of the global pressures on states, companies, and individuals that either are bankrupt or will collapse under the weight of their own debt in the next few years.

What The Effects Will Be: As I have already discussed in this article, there is no solution to a global debt problem in a world that is collectively bankrupt. The $18T stimulus that has just been created is not real money. It is monopoly money that might be useful if you play the Monopoly board game but it has zero value in the real world. So throwing $18T of fake money at $275T global debt (which can’t be repaid either) might fool some people for a few weeks. It is certainly fooling retail stock investors who are being lured into the biggest suckers’ rally in history. They will soon have the shock of a lifetime.

Virtually all asset markets will collapse, including stocks and property. But the biggest devastation will be when bond and credit markets implode. When that happens the $2 quadrillion derivative market will go up in smoke too with devastating consequences for the world.

Whether we finish with an explosion or implosion makes little difference to the end result. We could have a hyperinflationary explosion first, which I believe is more likely. But that would soon end in a depressionary and deflationary implosion. This will take the world back at least 50 years in production and trade terms and thus also in the standard of living. But before the decline stops, there will be massive financial and human suffering in the world, including social unrest and probably wars.

I was with one of my grandsons yesterday who wanted to photograph a peregrine falcon’s nest. These majestic birds can dive at 390km/h (240mph) to hit their prey which can be a pigeon for example. The poor pigeon doesn’t know what has hit him when the world’s fastest animal comes diving from above at 390km/h. If the economic bubble explodes as I have described above, the world will not know what has hit it either. It will all happen so fast.

What We Should Do: Most people sadly cannot plan for what is coming. They don’t have any savings and might have problems affording to stay in their house or apartment. In a period of crisis, your best asset and support system is a close circle of friends and family. This is what will keep you going physically, mentally, and morally.
We must remember that whatever happens it won’t be the end of the world. It will be different and there won’t be the decadence that signifies the end of a major era like we are experiencing now. Life will go on and although many people will suffer severely during the transition, the coming reset can create a better world."
- https://www.investmentwatchblog.com/
Share Share on Facebook Tweet Tweet on Twitter Pin it Pin on Pinterest
Back to Feed