Alice Is Missing Lets You Solve Your Own Veronica Mars Mystery 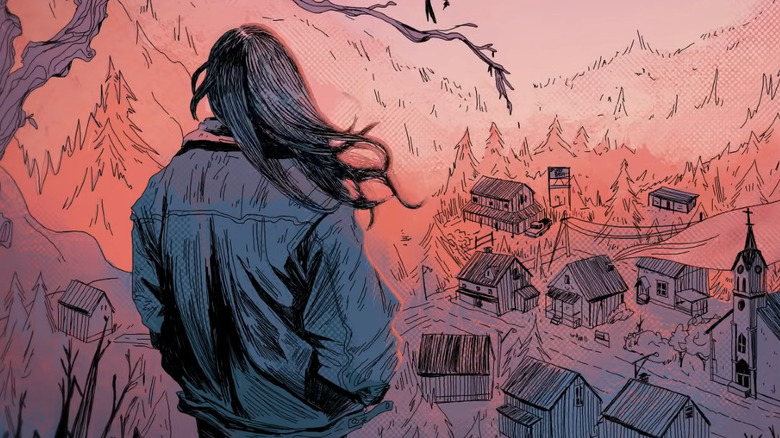 As someone who has cultivated a relatively disparate group of friends, I am always wary of throwing together different people for board game nights. Then again, if every game was as well-designed to foster new friendships as Spenser Starke's "Alice Is Missing," maybe I wouldn't be so hesitant to take the plunge. Part dinner murder mystery, part creative writing exercise, "Alice Is Missing" opened the door to new groups of friends and introduced me to one of my favorite bridge roleplaying games for new groups.

In "Alice Is Missing," you and two to four friends will take on the role of high school students in the town of Silent Falls. This North California community was hit hard by the recession and exists in a kind of industrial limbo; it's the sort of place that students are either destined to live in forever or flee the moment they turn 18. In this game, your group -- who possess the same swirling assortment of resentments, rivalries, and desires as any collection of high schoolers -- must work together to discover the fate of Alice, the lynchpin between your disparate social circles. 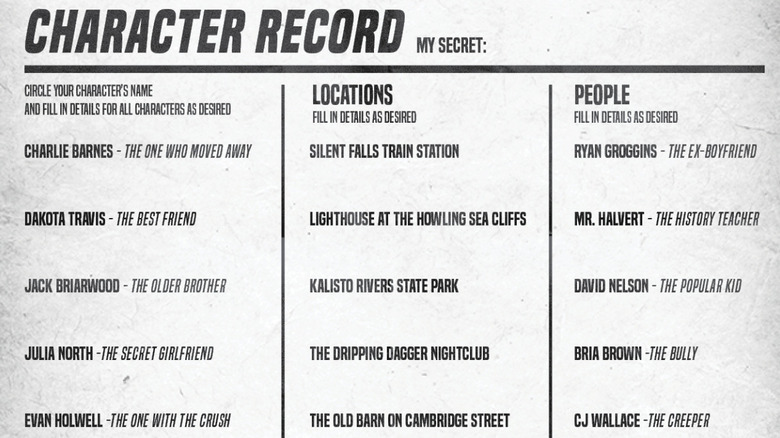 While the rulebook claims a three-hour runtime, this estimate is misleading. Each "Alice Is Missing" session is broken into two sections: the set-up, which requires players to identify their characters and collaborate on critical pieces of backstory, and the playthrough. Once you start the timer, each game of "Alice Is Missing" will take precisely 90 minutes (not including an additional piece of gameplay we will talk about in a moment). Therefore, the actual runtime of "Alice Is Missing" depends entirely on your group's size and their love of brainstorming.

Because you create the backstories for Silent Falls as a group, no two games of "Alice Is Missing" are exactly alike. First, each player fills in their character sheets and draws suspects and locations from the shared table. Then, as you take your turn, you contribute to the narrative using the prompt on your cards. Throughout this set-up, you will flesh out the world these characters inhabit, co-creating both motive and opportunity for several prominent townsfolk that may or may not be born out throughout a game. As Charlie Barnes -- the out-of-town friend who serves as the pseudo-DM -- I often played up my ignorance of the last year in Silent Falls, encouraging other players to push a little bit harder to explore the narrative thread.

This prep is important for more than just narrative reasons. Since "Alice Is Missing" is inspired by properties with mature themes -- the game lists "Searching," "Riverdale," and "Winter's Bone" as its primary influences, but there are also shades of "Twin Peaks" and "Veronica Mars" -- content warnings are key. Each group is encouraged to introduce a system of Lines and Veils, mechanics that allow you to flag violent or abusive content for removal both before and during a session. This approach allows the game to adapt to its players. Whether your group is more inspired by "Nancy Drew" or "Scream," the mystery will evolve alongside your storytelling. 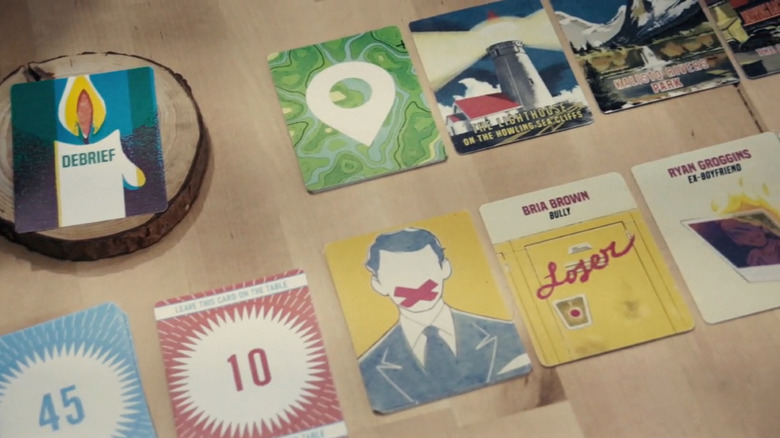 Of course, the true brilliance of Spenser Starke's game is its silence. With tabletop roleplaying games an increasingly common part of contemporary fan culture, many people might be curious about the experience while unwilling to take the full plunge into character sheets and vocal affectations. "Alice Is Missing" reflects an approach familiar to the roleplaying industry that spreads narrative control across the entire group of players. Even better, the focus on texting allows even a tabletop neophyte to explore the basics of roleplaying. There may be no secret theater kid lurking in your partner's soul but give them a phone, and they'll have no problem recreating their teenage ennui.

And as you adjust to the text-based gameplay style, real emotions emerge out of your fake exchanges. In one example, Alice's secret admirer chose to share an important piece of information privately with me. Meanwhile, two of Alice's teammates shared their misgivings about him in a small group chat, leading me to reveal what I had learned about him as a chance to ingratiate myself with my half-forgotten friends. As I screenshotted his response and opened the other chat, I found myself wrestling with this betrayal in ways I was not expecting. Then again, whatever brings Alice home safe, right?

As the timer runs down, players use the clock to flip over their cards and follow the prompts on the other side. This offers the narrative momentum of the game; at any given time, each player might be the person to discover important information about Alice's last known location. And if your group is struggling to develop a satisfying story arc, they can also use the game's searching cards to introduce an important plot device to the narrative. These are more creative prompts than in-game mechanics, but they can be helpful if you feel your group's energy flatlining a little. 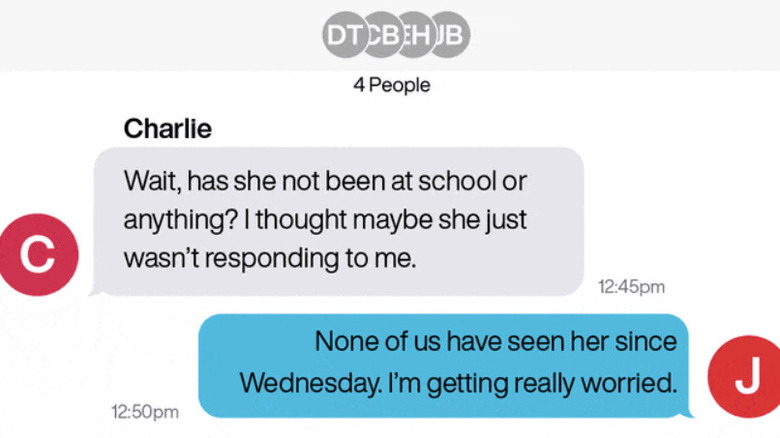 If there is a knock on "Alice Is Missing," it is that the game can sometimes feel like a series of predetermined outcomes. 90 minutes may seem like an eternity -- especially if you're sitting with players you do not know -- but I barely had enough time to organically work my secrets into the conversation before the narrative escalated. As a result, it felt like I had little control over the mystery's outcome. For the other players, though -- the ones who discovered the suspect or the location -- the sense of autonomy was considerably higher.

But whether you are closing in on Alice or just along for the right, "Alice Is Missing" saves one last reveal for its players. At the beginning of each playthrough, players are asked to record a private voicemail for Alice using the prompt on their character card. As the game twists and turns -- and we learn more about the days leading up to Alice's disappearance -- these voicemails offer one last twist of the blade in the heart of the story. And once the timer runs out, each person plays their voicemail to the rest of the group, revealing the hope, sadness, anger, or love that underpinned their relationship with Alice.

Given the limited number of suspects and locations to choose from, you will want to be careful with repeated playthroughs of "Alice Is Missing." The rulebook explicitly discourages you from playing more than once with the same group, instead encouraging you to find players who will "take the story in directions you didn't previously explore." That said, the collaborative nature of the game ensures that no two playthroughs will be exactly alike. How new players change relationships -- and tease out hidden tensions from the card prompts -- promises a new narrative.

Oh, and one last thing. Since "Alice Is Missing" is a text-based game, it has made the transition easier than most to a virtual environment. The game's website offers collaborative tools to play online, making "Alice Is Missing" the perfect way to reconnect with old friends. Perhaps even old high school friends. There is no better way to add an element of meta-commentary to "Alice Is Missing" than by playing it with someone you haven't spoken to since you were 17.

Read this next: The 14 Best Noir Movies Ranked

The post Alice Is Missing Lets You Solve Your Own Veronica Mars Mystery appeared first on /Film.