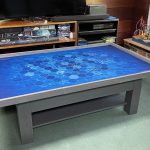 In 2020, Game Theory Tables unleashed their Origins Board Game Table on the world via a Kickstarter campaign. I was lucky enough to review the table, and it’s been a very welcome addition to my game nights since.

The Origins Board Game Coffee Table

As this was a prototype, the Origins Board Game Coffee Table arrived fully assembled, so I can’t comment on the difficulty level of putting it together. When I assembled the full-sized Origins Board Game Table in 2020, the only difficulty arose from dealing with the weight of the table itself. As this is a much smaller coffee table, the weight is correspondingly lighter and much easier to manage.

The base coffee table is made from solid ashwood and comes in your choice of three colors, with a fourth crowdsourced color that will become available during the campaign. The dimensions of the prototype table I received are 16.5″ high X 47″ long X 31″ wide. There is a 3 3/4″ deep vaulted interior which measures 39″ length X 23″ wide. A 4″-wide ledge surrounds the vaulted interior.

One of the ways you can use the table is by setting up games on the interior surface to play:

Should you want to pause the game and return to it, you can then cover it with the included tabletop.

The tabletop is reversible, and you can play games with it flipped over as well. While you won’t be able to cover a game in progress in this way, it does have the added benefit of raising up the gaming surface a few inches in height.

In this mode, you still retain the 4″-wide ledge running around the vaulted playing surface. With the flipped-over tabletop, you have a 2″ vault, and the playing surface is just slightly smaller at 37.5″ X 21.5″.

As you can see, either of those playing surfaces should be able to accommodate a fair number of games. But what happens when you want to play one of those notorious “table hog” board games?

There is an optional 3-leaf coffee table topper which not only raises the playing surface even higher to 20″, but gives you a full 5′ X 3′ playing surface. You still have a 1.5″ vault, enough to stop any but the most aggressive dice rolls from going off the table.

You have a lot of room to spread out a game and components with the table topper. Assembly is a simple matter of sliding the leaves onto the coffee table top, and latching them together. You’re then left with a stable and secure tabletop for gaming.

Of course, the Origins Board Game Coffee Table is good for other things besides board games. With the table topper, you have room to play most skirmish-level miniatures games, such as X-Wing or Marvel Crisis Protocol. You can also use the table to build LEGO, or jigsaw puzzles.

At the launch of their Kickstarter campaign, Game Theory Tables will have a total of 650 units each of the Origins Board Game Coffee Table and the Origins Board Game Table. The first 50 backers of each will receive a 30% discount off of the MSRP, as well as have their tables included in the first shipping wave. The first wave of coffee tables is targeted to ship to backers this December 2022, while the full-size game tables will start shipping in October 2022. Later backers will still get a hefty discount of 25% off MSRP, but there are a limited, set number of spaces available in each shipping wave. In other words, the later you back the campaign, the later your table may ship.

For backers of the Origins Board Game Table, there are some quality of life upgrades built into the new tables that are improvements from the original Origins tables. Additionally, there are multiple add-ons and accessories available both at campaign launch, and unlocked over the course of the campaign via stretch goals. You can check out the details for those on the Kickstarter campaign page.

The MSRP for the Origins Board Game Coffee Table is $1599, but you can get it during the Kickstarter for as little as $1119. The coffee table topper MSRP is $899, but it will be available for $674 during the campaign. Shipping is free in the USA.

The Origins Board Game Coffee Table – The Verdict

So, why a board game coffee table over a full-sized table? Some people may not have the space for a large table. And others, especially those with families, may prefer the more casual and comfortable atmosphere of playing while seated on the couch.

One of the things that I appreciated most about the Origins Board Game Coffee Table is that, at its base size, it still has plenty of room to play a good number of board games. Even if you can’t fit all of the game pieces onto the playing surface, that 4″-wide ledge gives you space to put the cards, playing pieces, and even drinks. The added height helps quite a bit too; after all, you don’t want to hurt your back bending over a table for hours.

The optional coffee table topper is a fantastic addition, as it greatly opens up the number of games you can play on the table. Having the same size playing surface as the Origins Game Table means you can use one of the growing variety of Game Theory neoprene mats.

If you already own an Origins Board Game Table and were looking to expand your game night possibilities, adding an Origins Board Game Coffee Table allows you to have two games running simultaneously. And because the coffee table looks like a smaller version of its big brother, you’ll keep your decor matching.

If you’re looking for a versatile gaming table for your living room, the Origins Board Game Coffee Table is a great choice. It’s solidly constructed, attractive, and priced aggressively, especially during the Kickstarter campaign. And much like they did during their first Kickstarter campaign, Game Theory Tables will be getting all of their Origins tables shipped out to backers much quicker than the majority of the other board game table Kickstarter campaigns out there. You could be playing on your new gaming table later this year.

For more information or to make a pledge, visit The Origins Season 2 Kickstarter page!

Disclosure: GeekDad received a copy of this table for review purposes.

Click through to read all of "Bring Your Tabletop Games to the Couch With the Origins Board Game Coffee Table" at GeekDad.If you value content from GeekDad, please support us via Patreon or use this link to shop at Amazon. Thanks!