Catacombs Cubes (and its expansion Monuments) eschews the dexterity game of its namesake and replaces it with a clever 'I cut, you choose' resource management game that's all about building structures by gathering and placing cubes in just the right configuration.

As avid board game players, sometimes it feels like the whole world is made of cubes.  Well, in Catacombs Cubes by Ken Valles and Aron West, you can take that concept one step closer to being literal!

In Catacombs Cubes, players will work to build up the most impressive town they can, as well as be the ones to contribute the most to the two palace cards which are being communally built by all players.  In order to be the best architect and earn the most points, each player will draft resources in the form of (you guessed it) cubes, which come in several different configurations. 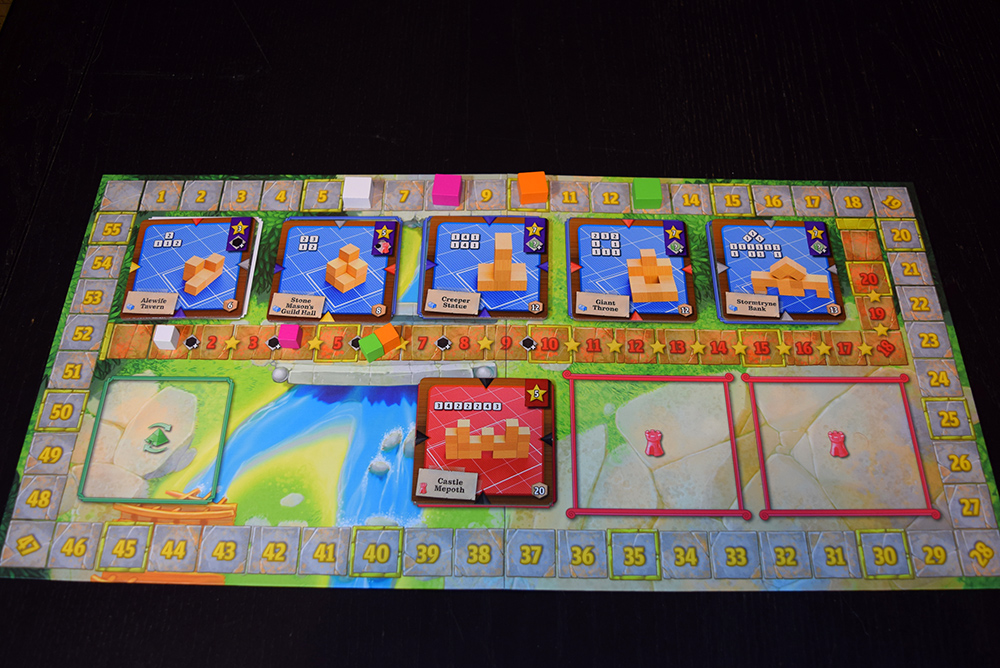 We received a copy of Catacombs Cubes for our consideration and possible review.

Andrew
Now, the ‘Catacombs’ part of Catacombs Cubes refers to the world in which the game takes place. Catacombs is a gorgeous, surprisingly complex dexterity flicking game that’s totally worth checking out, but Catacombs Cubes turns in flicking for stacking and monsters for urban planning!

The drafting is done by lots, and the lots can be established either by rolling quarry dice or by using quarry tokens – this choice is made at the beginning of the game, and is carried throughout.  Regardless of the mechanism of creating these lots (called quarry offers in-game), Catacombs Cubes works on an ‘I cut, you choose’ premise, where the lead player for the round will arrange the quarry offers and can manipulate them, but will be the last to pick their pile for the round. 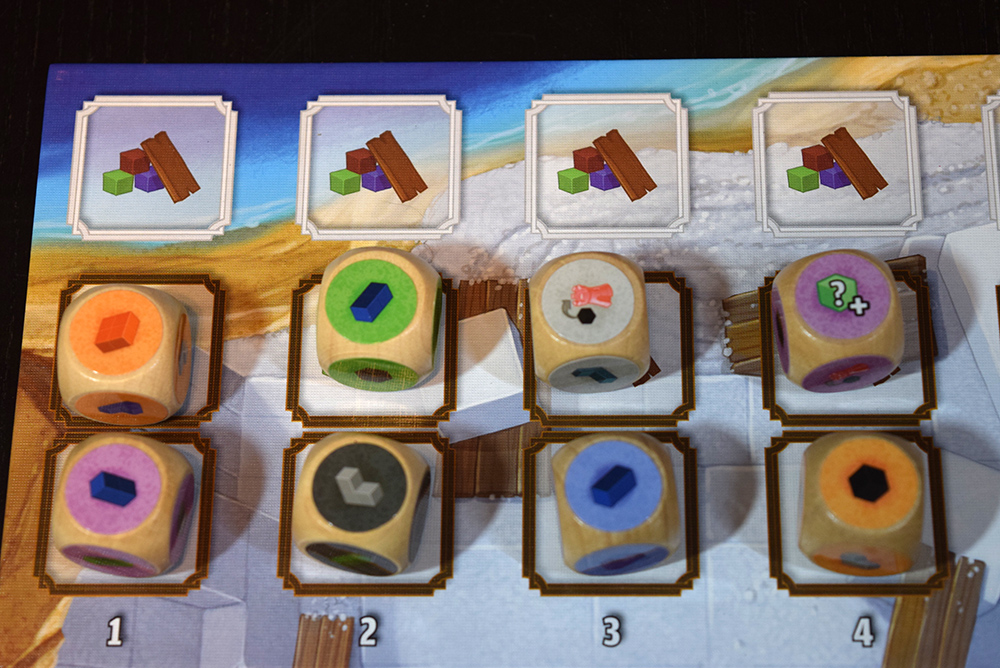 Andrew
I really like that mechanic, because it gives the top of every round a little strategic jolt! And that’s doubly true when you play with the tokens, which give the lead player even more tactical choices when they’re assembling the quarry offers.

Jess
Absolutely, yeah! I personally prefer the dice to the tokens, though, because I find that it makes the game quicker, which I really appreciate. I’d rather spend my time building than scrutinizing the cost-benefits of hidden verses revealed tokens (which isn’t something that factors into the game when you use the dice). 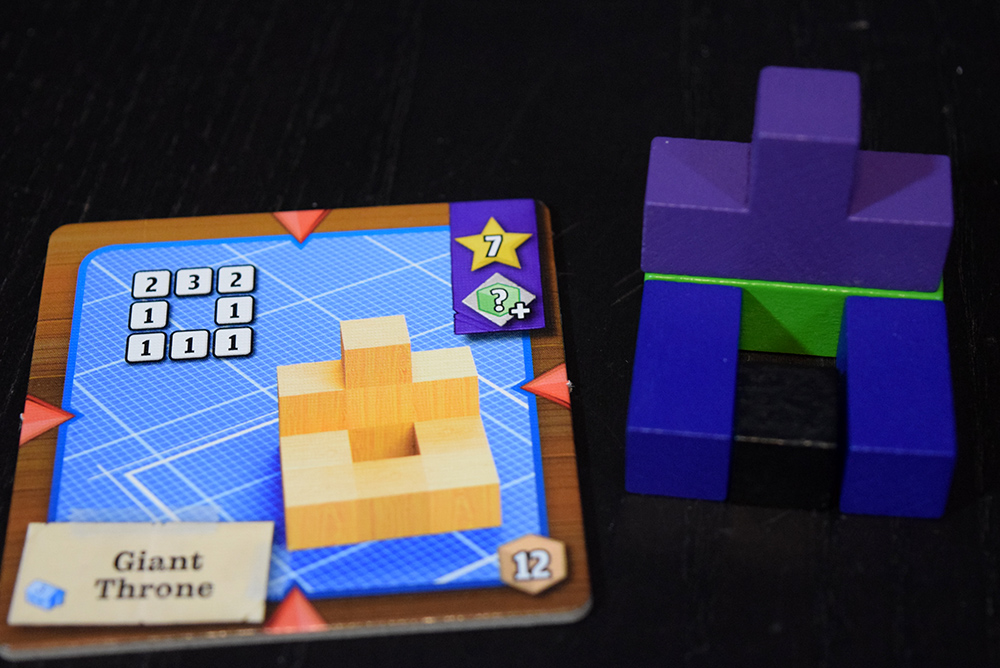 The goal of Catacombs Cubes is to accrue victory-securing points, and this is done in two ways.  You can either construct buildings in the village, a shared tableau of tiles that all players will add to, or contribute to the equally-communal palace construction.  Whether you’re constructing a village building or adding to the palace, you’ll need to stick to the blueprint of the building, which illustrates the shape and dimensions you’ll need to meet in order to complete the project and earn your precious points.  One of the coolest aspects of Catacombs Cubes is that these plans only show the final shape the building must be in before it can be finished – there is no requirement around which pieces you use or how you manage to fit them together.  So while these shapes are rarely particularly complex, the challenge really comes down to managing to assemble them efficiently, to make sure that you’re finishing projects more effectively than your opponents.

Village tiles are added to the central tableau, and their placement can earn players extra quarry bits and action tokens, as well as points for the person who built them.  Palaces are built over the course of the whole game, and adding blocks to them will advance players down a reward track, snagging bonus points and quarry resources.  The third kind of structure players can build are residence tiles which also get added to the village tableau, but unlike village buildings, players can only complete their own residence structures, and aren’t competing with other players to work on them.

Jess
So let me just say that I *love* games where I get to build things, and building things by, you know, building them is really satisfying! I like that it’s a race to complete tiles that everyone’s competing over, too.

Andrew
I appreciated the efficiency puzzle of it all, yeah. It’s super easy to build something out of a lot of little pieces, but if you can manage to make smart use of your larger quarry objects, then you’re likely finishing structures in fewer actions and therefor snagging all those precious points! 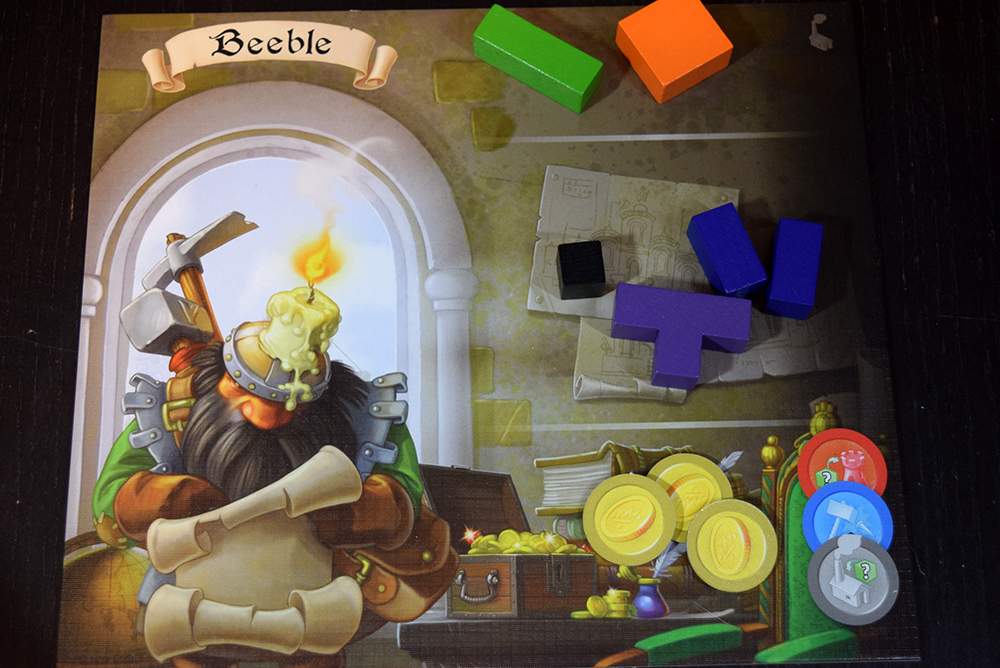 That ‘efficiency puzzle’ isn’t just about completing buildings faster than your opponent can manage, though.  Every time you build a structure, almost all of your quarry resources will be discarded (regardless of whether or not you spent them on the structure you’ve built).  There are opportunities to move resources from your construction yard to your warehouse (where they’re safe from being discarded unless used), but most of the time, you’ll need to be mindful of the losses you’ll deal with when you decide to build.

Andrew
The whole ‘construction yard vs. warehouse’ thing sometimes felt a little tacked-on to me, to be honest. While it did force an amount of strategic planning, it was rare that we found ourselves with big piles of quarry resources just sitting around – the whole point is to build!

Jess
I know exactly what you mean, but I’ve got to point out that in Catacombs Cubes, those quarry resources are a limited resource! If we weren’t constantly forced to clear our construction yards, then a strategy might be to horde resources to mess with your opponents.

Andrew
Right you are. Unless, of course, you’re playing with the optional ‘competitive’ resource rules, which means when you’d collect resources that aren’t available, you actually steal them from your opponents.

By manipulating the quarry resources in your supply and using bonus actions effectively, gameplay in Catacombs Cubes can move along at a steady clip, only slowing down at the top of the round as the quarry resource draft is set up and decided.  And while there is certainly opportunity for poaching structures out from under your opponents’ noses, a smart builder will be able to pivot, turning what was supposed to be one building into another and recovering from the lost opportunity as efficiently as possible.

This expansion to Catacombs Cubes provides a pile of new village, palace, and residence tiles, new building materials, two new building types, and enough player boards to bring the player count all the way up to 6!  The new building materials only factor in at higher player counts, but the rest of the modules can be added at any number of players.  In particular, the two new building types, monuments and parks, were the most fun addition.  Parks are flat but large structures that are worth lots of points, whereas monuments are complex, tall structures that reward players not just with points when build, but each time another player places a structure adjacent to them. 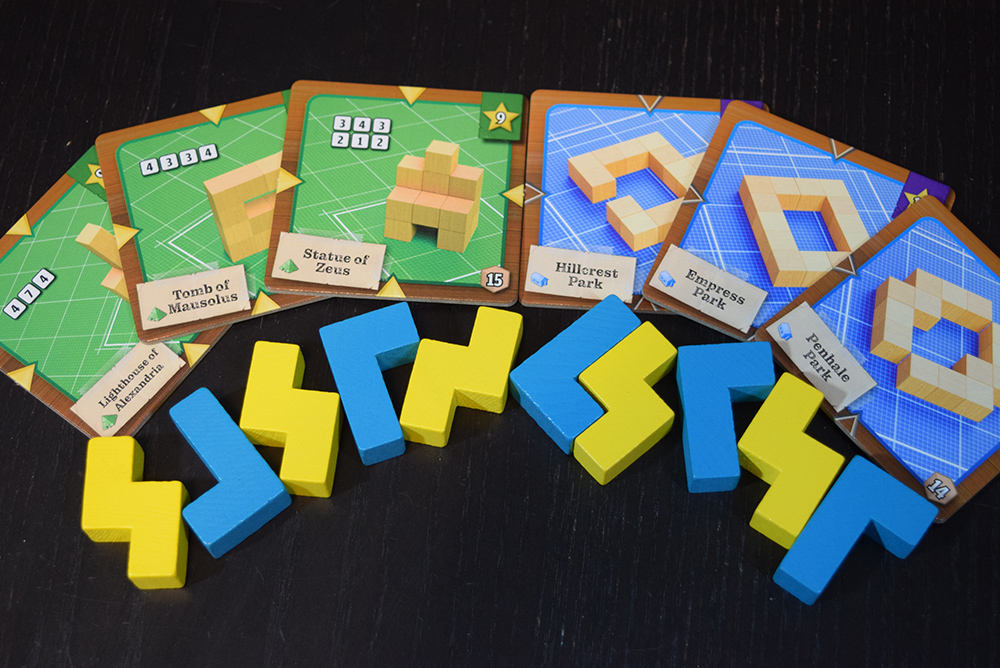 Andrew
Catacombs Cubes: Monuments is what we call an ‘always in’ expansion. Once you’ve got it, there’s no reason to separate it from your main game. The extra resources, increased player count, and new structures come as welcome additions to the core game.

Jess
Totally. That said, though, it’s worth noting that they don’t really change the formula of the game at all, though, so Catacombs Cubes: Monuments is absolutely perfect if you love Catacombs Cubes, but it won’t be the thing that changes your mind if you didn’t engage with the original.

With or without its expansion, Catacombs Cubes was a fun gaming experience.  The ‘I cut, you choose’ mechanic is a really smart one, though the complexity of the lead player’s decision-making process only increases with higher player counts (or you can just kinda say screw it and let the dice land where they may, and hope for the best).  Catacombs Cubes has some interesting variability in its setup – do you use the more aggressive resource rules?  Dice or tokens?  Standard starting resources or variable ones?  It’s just enough to let you tune your game experience to your preferences without completely changing the core gameplay, which is a fun, cube-powered tile placement experience.