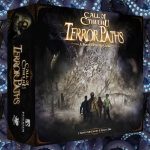 For gamers, the name Sandy Petersen is just as synonymous with the Cthulhu Mythos as its literary creator, Howard Phillips Lovecraft. Sandy helped launch Chaosium’s classic tabletop roleplaying game Call of Cthulhu 40 years ago, and has gone on in the intervening years to develop many games steeped in Lovecraftian lore, such as Cthulhu Wars and his Cthulhu Mythos roleplaying line.

Call of Cthulhu: Terror Paths – The Board Game

“It’s terrific to re-activate my old connections with Chaosium and work closely with them once more. I look forward to introducing new players to the horror of Lovecraft’s tales with a fast and easy to play board game. It also has the depth and detail to fascinate even the most experienced gamer. It provides an authentic and unique Call of Cthulhu experience. The game design is done and I consider Call of Cthulhu Terror Paths to be my personal contribution to the 40th anniversary of Call of Cthulhu!”

No price point has been released yet, and the game will be sold directly to the public, rather than through a Kickstarter campaign. For more information about Call of Cthulhu: Terror Paths, head to the game’s webpage.

Click through to read all of "Celebrate the ‘Call of Cthulhu’ RPG 40th Anniversary in 2022 With ‘Call of Cthulhu: Terror Paths’" at GeekDad.If you value content from GeekDad, please support us via Patreon or use this link to shop at Amazon. Thanks!