Getting Started with the Die-Cast Club 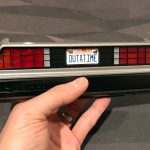 Earlier this year, I got contacted asking if I’d like to try out Eaglemoss’ Die-Cast Club, a subscription-based service that sells model kits of various cars, including several based on famous vehicles seen in films. Their newest kit is the Eleanor Mustang from Gone in 60 Seconds (the 2000 remake starring Nicolas Cage), but my eyes really lit up when I saw the DeLorean time machine from Back to the Future. (They also have the Ecto-1 from Ghostbusters, James Bond’s Aston Martin, and even the USS Enterprise, among other things.) Eaglemoss set me up with two build-ups, the Mustang and the DeLorean, and I’ve been trying them out. Like the films the vehicles are from, the experience so far has included both hope and disappointment, frustration and excitement.

First, here’s the way it works: the introductory set is cheap, just $1.95 for the first two kits, plus some additional things like posters. For instance, for the DeLorean, there’s an exploded diagram poster, a pamphlet showing all the features the finished model will have, and then instructions for the first two kits—each one is a little magazine that has the instructions, but also some articles about the film. Some of it is the sort of thing I’ve read before, either in the Back to the Future: The Ultimate Visual History or Doc Brown’s Owners’ Workshop Manual, but there’s also some trivia and stories that were new to me.

These aren’t your old car model kits, of course. As the name implies, the body of the car is made of die-cast metal, the tires are actual rubber, and there are bits made of plastic as well. At 1:8 scale, they’re also an impressive size: the Eleanor Mustang will be 22.9″ long. And they’ve got lots of nifty features such as working steering wheels and lights, too. Eaglemoss worked with Denice Halicki, wife of Toby Halicki, the director and star of the original Gone in Sixty Seconds film. The instruction kits for the Mustang include trivia about both films, a biography of Toby Halicki, and a lot of info about all of the various other cars that were stolen by the crew during the film.

After the intro set, you’ll get a new shipment every month including 4 more kits: the site lists the price per kit (with shipping), but it comes in a single box that will cost about $60. The total number of kits varies from car to car—for instance, the Aston Martin is 88 kits, but the Ecto-1 has 141! If you do the math, that does mean each model is a significant investment in both time and money—by the time we finish the Eleanor Mustang, it’ll have been just about 2 years, with a sticker price of over $1,600 (there are 110 kits for the Mustang). So far we’re about 10 kits in with the DeLorean and 14 kits in with the Mustang.

The first kit includes a mini screwdriver, and each kit includes its own required screws (along with spares). The kits vary in size in complexity. For instance, the first two kits in the DeLorean get you started on the rear of the car, but they’re divided up oddly: Kit 1 includes most of the rear and one taillight, while Kit 2 includes the other taillight and a front fender that only requires two pieces of plastic trim to be screwed on. For the Eleanor Mustang, one wheel assembly (the rim and tire) was considered a kit, while a second wheel was split up into two kits—the tire and part of the rim in one, and the rest of the rim in another. There’s also a good amount of single-use plastic involved—some kits come as pictured above, with a double-layered plastic insert on a cardboard back, and others come in plastic baggie with a cardboard label.

The two kits have had different types of screwdrivers—the DeLorean’s has a larger rubber handle that’s easier to grip, but I found that the tip wasn’t great and chipped a bit, which then made it more likely to strip the heads of the screws. The Mustang’s screwdriver had a narrow plastic handle, but the tip is better, so I’ve been mostly using that for both kits. Both kits use various sizes of screws, with some letter codes (M or DS for die-cast metal, P or PS for plastic).

The Eleanor Mustang kit starts off with the front of the car, with its iconic headlights and grill (though the grill itself comes in a later set. Just from this front piece, you can get a sense of how hefty the car will be once fully assembled—it’s solid and weighty, and the gunmetal paint matches the car in the film perfectly.

Although I’m assembling the DeLorean myself, I’ve let my 14-year-old daughter try out some of the Eleanor Mustang set. She really enjoys putting things together so she’s excited to work on these with me. In a few instances, we found it really helpful to have an extra hand or two to hold things in place, because many of the screws are so tiny.

One thing that strikes me as a little funny is the order that the kits come in. The Mustang started off with the front grill and headlights, plus a wheel, the engine (it’s the top half of the engine, with the air filter), the back of the driver’s seat, and the hood. Of course, none of these components actually attach to each other, so that means I have this random collection of car parts, and I have to just keep them organized until something comes along that connects them together. With the DeLorean, one of the latest kits included the frame, so now I’ve at least attached both of the wheel and suspension structures to it—but that still leaves the back of the car and the fender, as well as some other scattered pieces. I’m not sure how they decide the order of kits, and I’m curious to see what’s next in each build.

It’s been a lot of fun to see how things fit together—for the DeLorean, I enjoyed putting together the suspensions for the front wheels, and I’ve got part of the steering mechanism as well so I can see it working, too. The DeLorean also has a swappable part for the top of the nuclear reactor: you can either have the cap where Doc inserts the plutonium, or put the Mr. Fusion on it instead.

The level of detail on the components is great, though it also means there are some very tiny bits you’ll have to assemble. For instance, on the Mr. Fusion part, there are two tiny springs attached to the red clamp—you have to put one end of the spring onto the clamp, then fit the spring into place, and then secure it with two screws. If you need reading glasses, you’ll definitely want to keep them handy during assembly.

We did run into a few issues. For instance, in the introductory pamphlet for the Eleanor Mustang, one of the listed features is windows that roll up and down—but once we got to kit 16, the one with the window, we noticed that the window is screwed directly onto the door, so it definitely doesn’t move. I asked my contact at Eaglemoss about this, and here’s the response: “Yes, the wind-down windows was a communication error between the package, the supplier and us. The Marketing team sent out an email to customers confirming that it was a mistake and apologizing for this.” They said the rest of the information should be correct, though.

Another issue I ran into was with the DeLorean: once I’d assembled the frame and attached the two wheels, I noticed that the right wheel spun freely but the left one tended to stick for some reason. Between this and a small part that I broke on the Mustang’s door, I figured it was a good opportunity to find out about the replacement policy. For manufacturing defects, Eaglemoss will ship a replacement for free if you send them a photo of what’s wrong. For parts that you break, they’ll send you a replacement kit at your expense. For the DeLorean, Eaglemoss sent a replacement suspension and wheel. I assembled both, removed the old one from the frame and attached the new one, and … it does the same thing. That’s kind of disappointing, because I’m not sure I want to assemble it again, but also it does seem like maybe there’s just something wrong with the wheel model that makes it spin just slightly off-center. I just received the replacement this past week, so I may contact them again to see if they can help me figure out what’s going on there. There’s also a magnet in a piece designed so that the wheels can flip down, but the magnets keep coming unglued from the plastic and sticking to the metal that’s supposed to hold the plastic in place.

I think the biggest barrier for many will be the cost; as cool as the finished product will be, I’m not sure that the subscription is something that I’d be able to afford myself if I weren’t receiving it to review. Granted, $60 a month on a hobby isn’t totally out of reach for me—that’s about the cost of a decent board game—but for me the board game will provide hours of engagement, while one shipment of kits can be assembled sometimes in less than an hour. Add in the amount of time it takes to read through the magazines and there’s a bit more value there, but it’s not going to fill up the month before your next shipment arrives. Your mileage may vary, of course—and it’ll also depend on how much you’re drawn to the particular vehicles.

Overall, I’m still excited to work through the rest of the builds, despite some of my complaints. I’m excited to see it all put together, and I love the attention to detail that has gone into the models. It’s been a fun project to work on with my daughter, too, though it feels a bit unreal that by the time we finish the Mustang she’ll be halfway through high school. I’m reminded of that Johnny Cash song, “One Piece at a Time.”

For more about the Die-Cast Club, including the list of kits currently available, visit the official website.

Click through to read all of "Getting Started with the Die-Cast Club" at GeekDad.If you value content from GeekDad, please support us via Patreon or use this link to shop at Amazon. Thanks!