Hunter X Hunter Is An Anime Adventure Like No Other 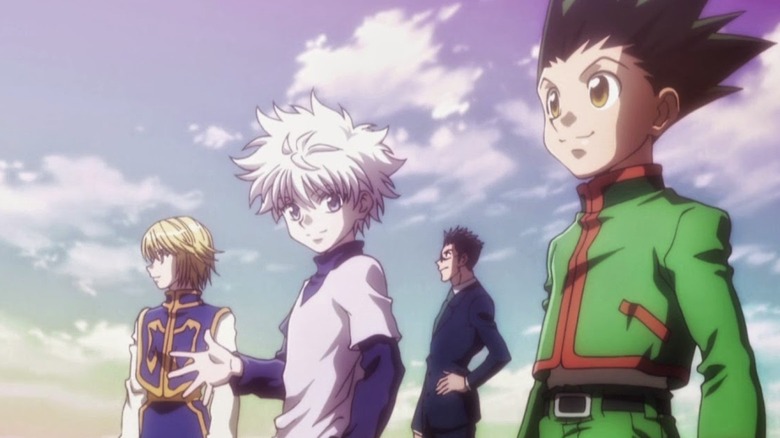 (Welcome to Ani-time Ani-where, a regular column dedicated to helping the uninitiated understand and appreciate the world of anime.)

Undoubtedly the most popular genre of anime, the shonen anime (or manga) is one with a well-established formula that works nearly every time, but it's still a formula that does not allow for that much experimentation, in what's essentially the medium's answer to the hero's journey. Some shows manage to change just enough to feel a bit different, while others simply embrace the tropes and their potential, making for a familiar yet fresh experience. One of the latter shows is the very excellent "Hunter x Hunter."

On the surface, there is very little that differentiates "Hunter x Hunter" (the x is silent) from other anime; it stars a young boy who sets out on an adventure to find his father, who is a "hunter," or essentially a licensed adventurer. Along the way, he discovers his extraordinary strength, makes some lasting friendships, fights some bad guys, and saves the world.

What does make this show feel fresh is the way it truly, unequivocally embraces the "it's about the journey, not the destination" cliché, as it explores a variety of tones and genres that feel like the show evolving into vastly different anime each season, one of the most thought-out power systems in action shonen, and a story with actual consequences. It's a formula that continues to influence the biggest manga and anime around, from "Naruto" and "My Hero Academia" to "Jujutsu Kaisen," and one that makes for a quintessential modern shonen.

What Makes It Great 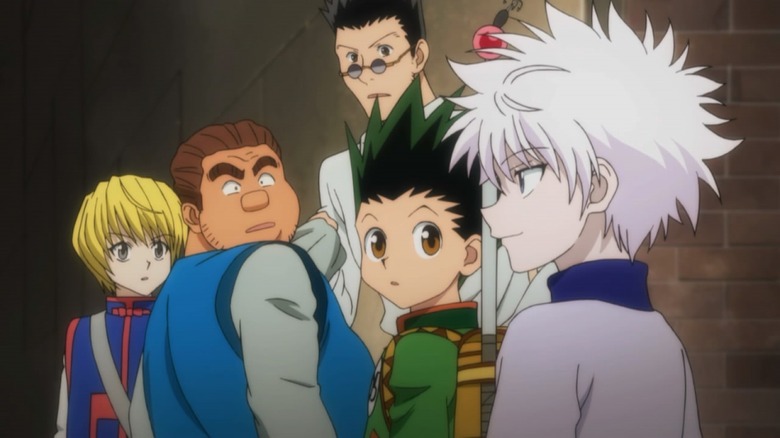 Speaking of clichés "Hunter x Hunter" embraces and challenges, the show's greatness hinges on its characters. Like many shonen, this show has a wide ensemble of characters, each as colorful and memorable as the last, whether it's a killer clown with an unhealthy obsession with a 12-year-old, a mutant alien ant, or the oldest-looking teenager around that looks like a distant cousin to Lupin III. Manga creator Yoshihiro Togashi and anime writers Atsushi Maekawa and Tsutomu Kamishiro make sure each character leaves an impression on the audience, and has agency, goals and ambitions, no matter how small a role they have in the overall story.

It is also through its characters that "Hunter x Hunter" shows how different it is from most shonen anime, as it does not have a traditional group of friends that stay together throughout the story, instead changing cast each arc, with only a handful of characters returning at a time. Those who seem like our protagonist Gon's best friends depart to follow their own paths, his mentors change or get killed, and it's all part of the journey — RPG game masters should take note of the way the story brings back plot threads and characters in an organic way that feels nonlinear and gives the feeling of a vast and moving world.

Indeed, the show makes it clear that more than being a protagonist that the entire story revolves around, Gon is a narrator telling a story with multiple threads, chapters, and protagonists. He is never in the middle of everything, but just so happens to be around at the right moment to sort of be involved. He doesn't even meet half of the villains in the show. Even Killua, Gon's best friend and the one character that stays with him from season to season, is more of a traditional shonen protagonist than Gon is; but from the beginning, there is a sense that their stories will eventually diverge and they'll have to part ways, because that's life.

Speaking of a vast world with different moving parts and a revolving cast of characters, "Hunter x Hunter" trades not only its cast, but its tone and even genre. Each story arc feels like it came out of an entirely different show, as one season may follow a noir plot full of mystery and machinations, only to be followed by a "Yu-Gi-Oh!"-like story set in a virtual-ish reality gaming world, and then by a sci-fi story about mutant ants who want to conquer the planet. It is the best example of making the journey the destination, as the ultimate message of "Hunter x Hunter" becomes clear, "You should enjoy the little detours to the fullest. Because that's where you'll find the things more important than what you want." Each story arc feels like its own separate and complete story, and even if it very rarely feels like they are advancing any notion of an overarching story, the arcs feel fulfilling and essential to the story, because it makes for a rich and living world that doesn't stop for the main character. This is why, even if the anime is incomplete and the manga keeps going, "Hunter x Hunter" is a complete experience with one of the best endings in anime, because it ends one very clear chapter while still making it clear stories will carry on off-screen.

What It Brings To The Conversation 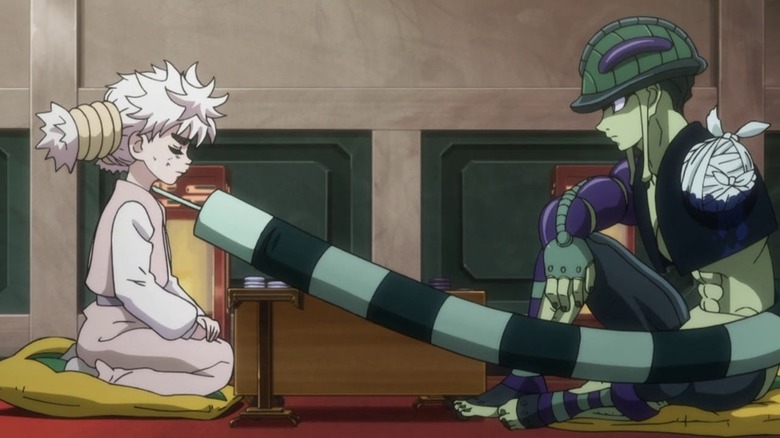 As nuanced and fleshed-out as the protagonist and the good guys are, the villains are even better. "Hunter x Hunter" has some of the best villains in anime, each serving a unique purpose both for world-building, and in challenging that story arc's protagonist. The show doesn't need to make you root for the villains in order to make them sympathetic, as each season spends just as much time with the heroes as it does with the villains, showing their goals and ambitions, but also their flaws and personal issues. Meruem, the mutated ant genetically engineered to be an apex predator, may seem like a boring, ultra-powerful villain at first, one that can only be defeated in an epic battle. Instead, he is at his most fascinating when engaged in an epic battle of wits playing a board game with a child, one that challenges his notions of strength, and humanity. Each villain is granted enough character development that you could easily imagine a spin-off telling their own story, and when they're defeated, it's usually bittersweet since we've come to understand them not as bad guys, but as people — except for Hisoka the sadistic killer clown.

If the villains are more than just bad guys to be defeated, the heroes are also more than just good guys that will win in the end. "Hunter x Hunter" excels at crafting moral dilemmas for its hero and challenging the very idea of a shonen protagonist. Rather than a stereotypical go-getter hero who jumps head-first into danger and is rewarded for his recklessness, Gon's attitude is deemed as toxic and harmful to his loved ones from the beginning. Sure, his power and strength may allow him to come out relatively unharmed and to defeat the bad guy most of the times, but his punch-first-ask-questions-later approach eventually stops working and others pay the price. Gon's story is one of learning, but also one of making irreparable mistakes and having to live with those choices. There is no victorious super saiyan moment of triumph, but a moment of deep anger and grief that shows how far the hero can fall when broken. Gon's most heroic moment, then, is not one of violence, but when he apologizes for doing something wrong and promises to try and be better.

Why Non-Anime Fans Should Check It Out 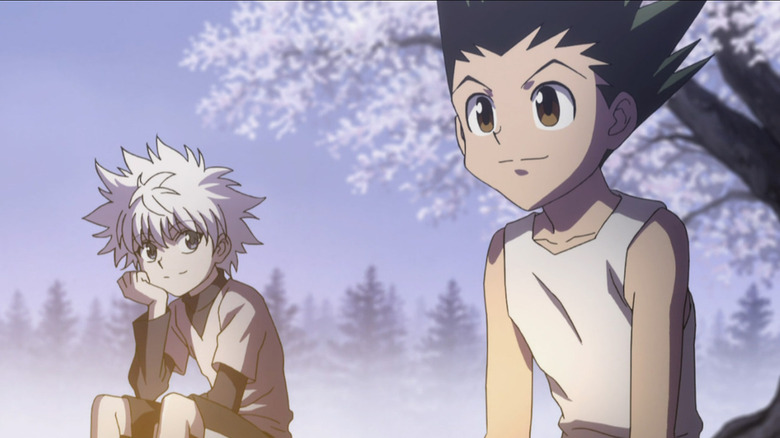 If you want a taste of why shonen anime and manga remains the biggest genre in the medium since its inception, you can do a lot worse than "Hunter x Hunter." This is not a show that breaks the mold and goes against the tropes of the genre, but a show that embraces every trope and its potential for storytelling, a show that challenges the viewer and what they expect from a hero's journey while still delivering one of the best hero's journeys in animation. From an excellent soundtrack, to a rare instance of the same music theme being used throughout all 148 episodes (kind of) without it ever growing stale, to one of the best anime friendships ever put on screen, "Hunter x Hunter" is a journey worth taking, and one you will never forget.

Watch This If You Like: "My Hero Academia," "Naruto," "Fullmetal Alchemist."