With the wind howling and the temperature quickly dropping, it looks like it's about time for some indoor fun here in Beijing. And the place to go for those in-the-know in the tabletop gaming community? DICE Con, aka Beijing International Board Game Convention! Held annually since 2014, the event is probably one of the biggest tabletop game conventions in mainland China. Even though it was canceled last year, and pushed back numerous times this year, due to the pandemic, it's finally happening from Oct 23-Oct 24 at the Agricultural Exhibition Center. 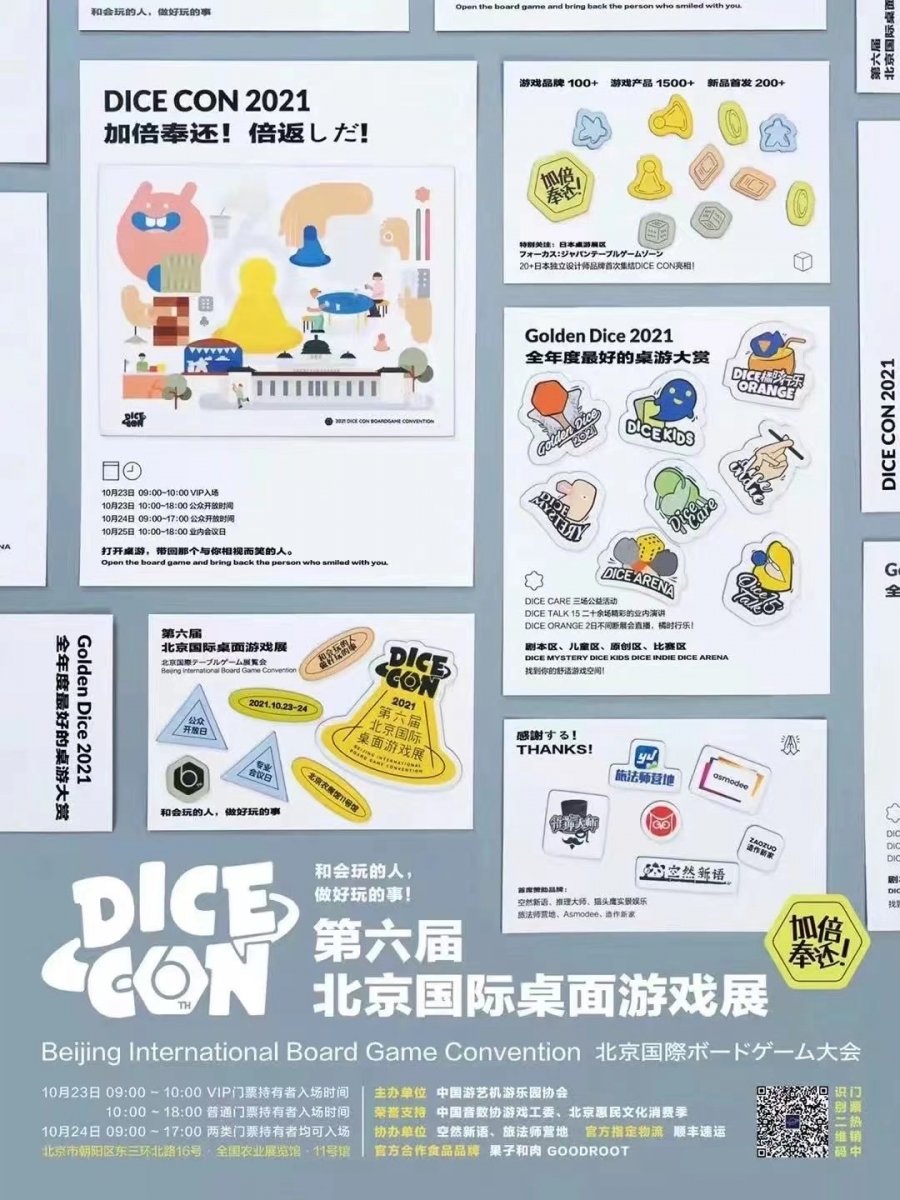 Whether or not the cancellation and continued postponement had anything to do with it or not, this weekend is gonna be big. There will be over 1000 games from a diverse selection of board game publishers and independent designers from inside and outside China. Plus, the venue has been divided into different sections for the gaming world's many different communities: like DICE Mystery for role-playing games; and DICE Arena, where card players – be they fans of Magic, Yu-Gi-Oh, or Pokemon – can put their skills to the test. There will even be a DICE Kids area where the gaming spirit can be passed along to the next generation.

Among the many independent designers will be yours truly and my good friend 啊力 Yalqun Galib representing Beijing – yup, I just happen to be a part-time game designer!

I'll be showcasing two of my games at booth X02-024. The first is 五行阵 wǔ xíng zhèn "Five Elements Chess", whose rules and gameplay are derived from the cycles of the five elements of Taoism. Gamers will learn the interchangeable relationships between these elements and think ahead by analyzing information available to them on the board in order to occupy as many tiles as possible – a bit like Go but more than just black and white, and on a triangle-shaped board. 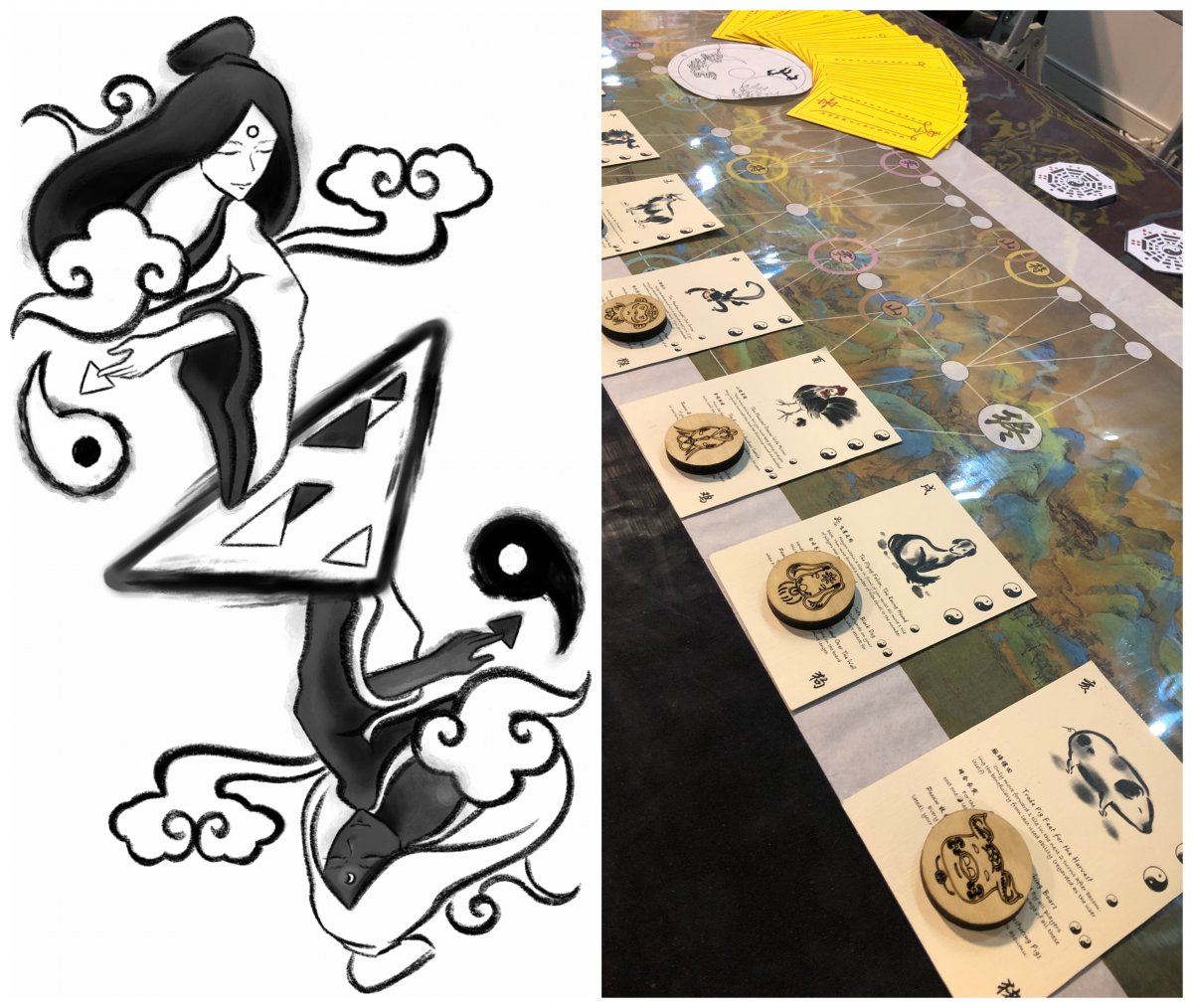 The second game I'll have at the event is 千里生肖行 qiānlǐ shēngxiào xíng “Zodiac Run”, a racing game that combines the Chinese Zodiac with Chinese idioms, where gamers will be playing as one of the Chinese Zodiac traveling across the traditional landscape painting and utilizing its skills derived from Chinese idioms to be the first one reaching the finishing point. During the gameplay, the players will not only get to appreciate traditional Chinese aesthetics but also get to practice and Chinese idioms. There will also be a limited run of games like these and more, plus other merch, available for purchase at the con.

As a Uygur who was born in Xinjiang but has spent most of his adult life in Beijing, all while learning English from his father, Yalqun Galib has a sharp sense of linguistics. This has influenced the game he'll be showcasing, called 笔画江湖 bǐhuà jiānghú King of Characters. It's sort of like Scrabble but with Chinese characters. Players place down beer caps with strokes written on them on a board in turns and try to form characters with these strokes in the correct order. It might be a bit confusing seeing the Chinese language dissected like this, but the more you play the game, the more your Chinese language skills will improve!

There's a bit of bad news for console gamers though. Many netizens have said in previous weeks that game sellers on Taobao are unable to fulfill orders due to new warnings from local authorities. This comes as 自由人电玩, a well-known video game retailing store in Beijing, had their storefront in Galaxy SOHO shut by the city's customs bureau.

Although it's unclear what the reasons may be, all signs point to these stores procuring merchandise by illegal means – namely smuggling. Of course, smuggling should never be tolerated, but it's natural for these actions by the authorities to upset a few netizens and gamers. It also begs the question of whether or not this is an omen for tighter restrictions to come, like a potential ban on gaming platform Steam.

Come what may, this weekend is all about having fun no matter what the future may hold! Interested in coming out? Scan the QR code in the poster to get tickets – one-day entry is RMB 78, while a two-person one-day bundle is RMB 138. The convention will go from 10am to 6pm on Saturday and 9am to 5pm on Sunday.

Read: PG-30: Must Protecting Minors Always Affect the Adults in the Room?