Leonard Maltin, one of the world’s most well-known movie critics, is getting his own board game from Mondo, and a few lucky players could end up getting into the real-life movie business themselves thanks to one of the game’s more interesting aspects. Get the details below.

During this year’s Comic-Con at Home, Mondo Games unveiled a new game called King of Movies: The Leonard Maltin Game, which is described as “a tabletop casual party game of creative invention and hilarious deception.”

The game involves tons of Maltin’s synopses of movies that have been published in his annual movie guides for years. Here’s how the game is played:

In King of Movies, it doesn’t matter if you’ve seen every film ever made or if you’ve never seen a movie in your life. The fun is in the fibbing. One player reads a movie title and the other players invent a short synopsis in Leonard Maltin’s unique style, with the goal being to trick the other players into thinking theirs is the real Maltin review. If you choose the real Maltin or you fool another player, you score.

So basically it’s like Balderdash, but for movies. Sounds like it’d be fun…assuming you’re not playing with a bunch of people who have obsessively read Maltin’s movie guides for their whole lives, and would instantly know which answers are the made-up ones. (In other words, if you want the best odds of winning, it might not be best to play this with a group of other /Film readers, just to be safe.)

But here’s the cool part. Since Mondo and Drafthouse Films are both owned by the same parent company, they’ve struck up a partnership for this game which could result in some lucky players actually having their ideas turned into a real movie. Here’s how it works:

If your synopsis is extra creative, your insane/brilliant/outrageous movie idea might just become a future cinematic sensation. Snap a photo of your best and most creative King of Movies synopses and post them to Twitter and Instagram with #MaltinKingofMovies. On January 1st of each year, Leonard Maltin himself (!!!) will choose one synopsis that will be officially optioned by Drafthouse Films. 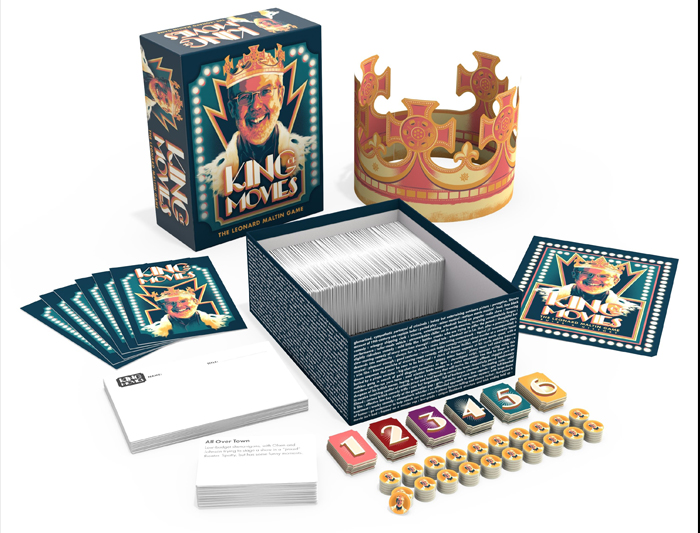 Naturally, just because something is optioned by Drafthouse Films doesn’t mean it’s definitely going to become a movie, and it’s unclear from the press release what type of compensation you’ll receive if your idea does turn into a full-fledged film. But still, it’s a cool little added bonus.

Mondo artist Matt Taylor provided the game’s artwork. Two to six players can play (there’s an app for social distance-friendly sessions), and the game costs $25 and is expected to ship in September 2020. You can pre-order it here if you’re interested.

The post Mondo’s New Leonard Maltin Board Game Gives Players a Real Chance to Have a Movie Pitch Optioned by Drafthouse Films appeared first on /Film.