Pieces of a Successful Board Game 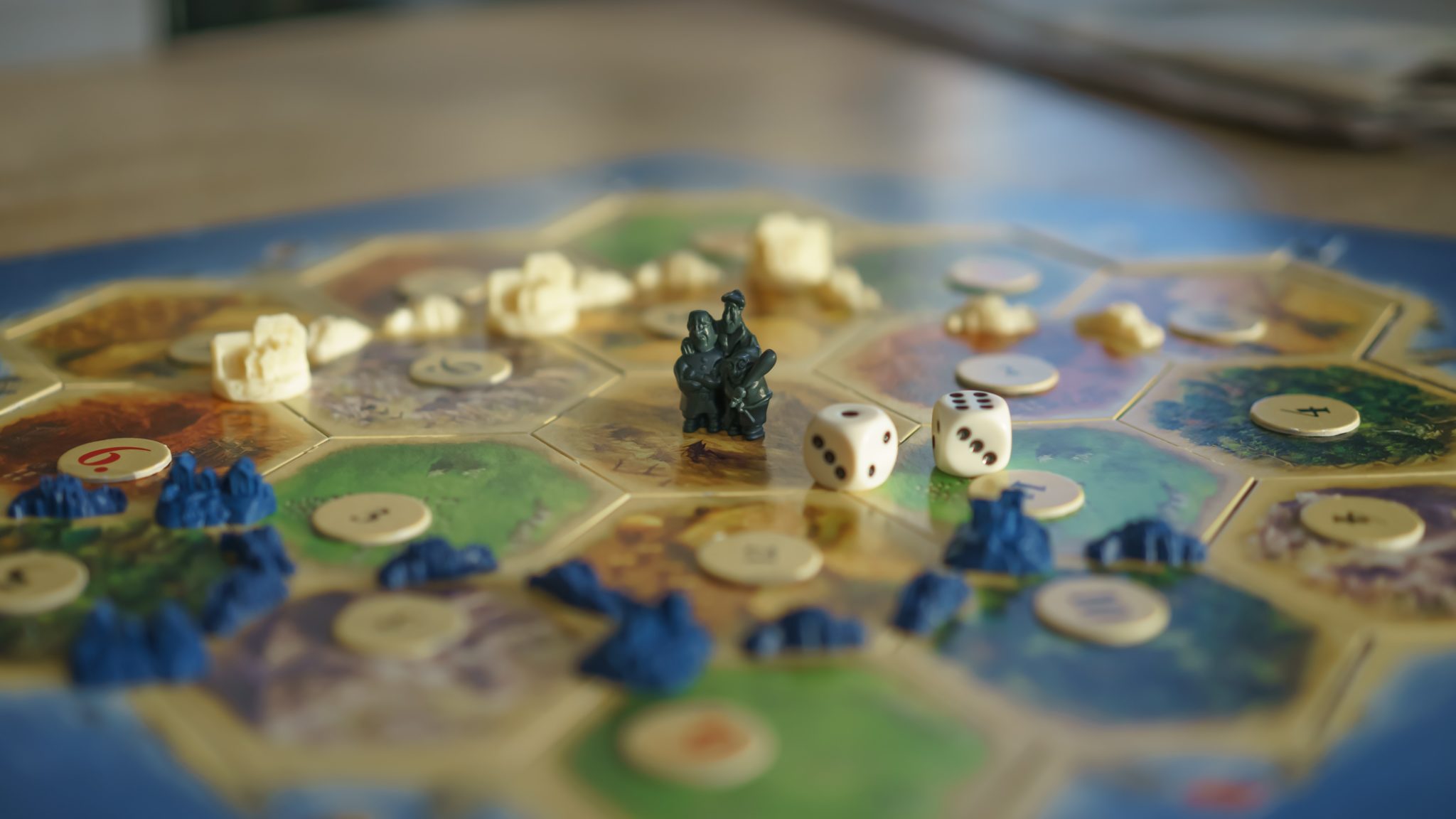 I am an avid board game player. I love that I can be very analytical in coming up with a strategy to win a game while also communicating and having a great time with friends. After my first experience with an indie board game I quickly became addicted to looking at BoardGameGeek.com, the IMDB for board games, in search of the next great game to buy.

I built this app looking at information provided on BoardGameGeek.com. I focused on what attributes popular games have and if they are reproducible. Popular games will be described as games that have a large number of BoardGameGeek users reporting that they own the game. This is not a perfect metric because games like chess are not at the top of the list. But it does have modern indie favorites like Gloomhaven and Catan at the top of the list. Those are the types of games that modern board game designers should be aspiring to make.

The original data set is hosted on Kaggle  by Jesse van Elteren. The original data scraping happened in August of 2020.  The dataset has almost 20,000 games, ranging from simple, timeless card games like Go Fish to complex modern epics like Gloomhaven. There were 55 attributes associated with each game. The key features include the year published, the number of user ratings, the average rating, how complicated the rules are on a scale of 1-5, recommended minimum age of players, expected playing time, the game categories, the game mechanics, and the number of BoardGameGeek users who report owning the game. These values are all crowd sourced by the users of BoardGameGeek, which allows for the rich detail of the dataset but requires an extra level of caution for user bias.

I removed any public domain games because you can’t make money designing a public domain game. I shrank the date range to games released between 1995 and 2020. I thought that we needed to remove some ancient games (i.e. Chess, Checkers, and Go). But it was difficult to decide which year should be the first. Settlers of Catan, released in 1995, is a gateway game to the modern indie board game market. There is also a sharp increase in games released each year after 1995, which indicates a turning point into the more modern board game market era. This cutoff pained me because my favorite board game, Diplomacy, had to be excluded from the data set. But sacrifices have to be made for clean data!

Then, I cleaned the Game Mechanic and Game Categories columns. Some of the richest sources of information were the board game mechanics and categories. Board game mechanics are the tools that you use and how you use them to play the game (e.g. rolling dice in Monopoly or the pattern recognition of Connect-4). Board Game Categories are the themes or the stories of the game (e.g. economic concerns in Monopoly or Connect-4 being for children). Each game had a list of all of their mechanics/categories. I split those lists and transformed them into a sparse matrix where each game had a “1” if the game had that mechanic/category and a “0” otherwise.

To get a sense of how the analysis is done, we will first look at the number of games owned vs. the games’ average rating. I binned the target variable, number of games owned, as reported on BoardGameGeek, because the distribution was skewed so heavily towards games with very few reported owners. Each bin has 20% of the observations, ~3120 games. This approach loses some of the nuance that might happen between each bin, so it is important to be cautious not to over-interpret any single observation. I will mostly be looking to see trends that persist across multiple bins. 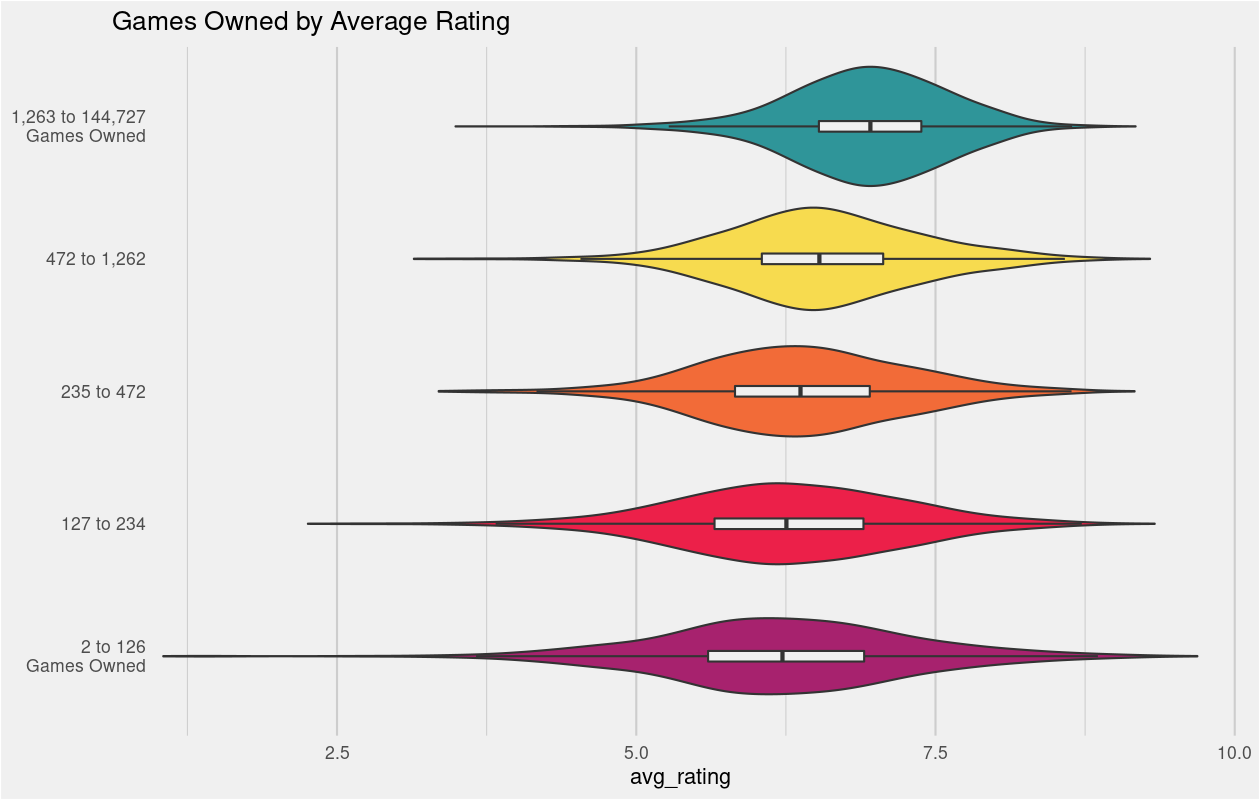 The result that more popular games have higher ratings is a trivial result. Initially, I thought that less complex and shorter games would be more successful. Their shorter play time and simple rules would make them more likely to be sold to the masses. Party games would be a prime example of a style of game that can appeal to the masses. 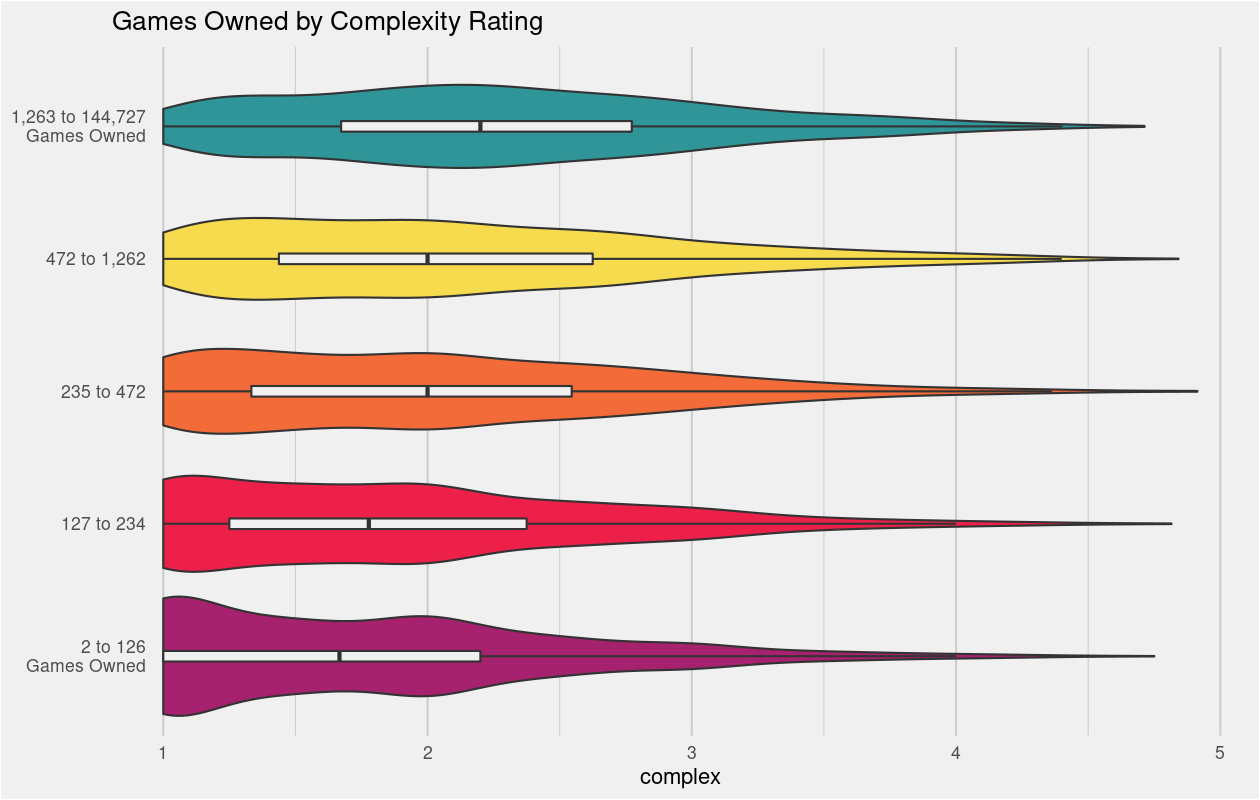 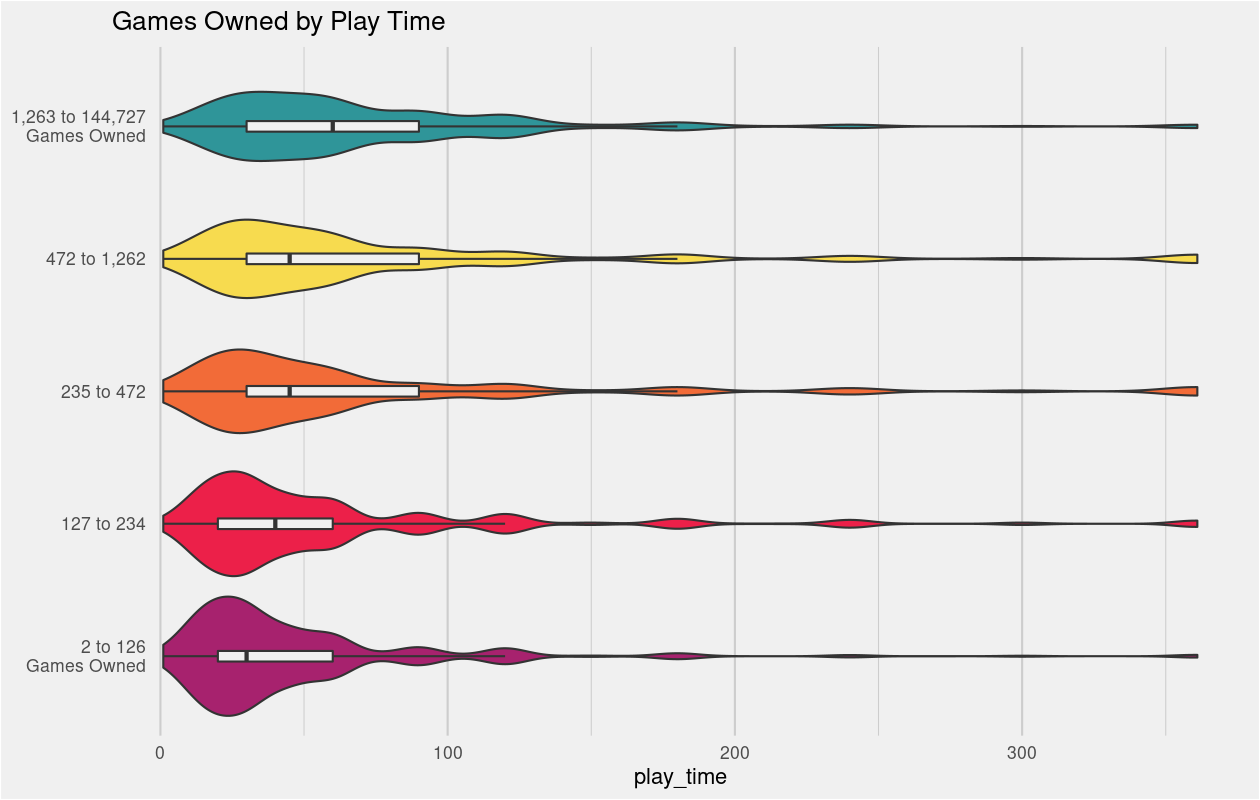 The other major expectation that I had coming into this was that German-style board games, or economic games like Catan would be popular because Catan functions as a gateway board game for so many people. To discover if I was wrong on my two initial expectations, I will now look at game mechanisms and game categories.

The overall average for all mechanics shows that as games get more popular, they are increasingly likely to have more mechanics added to their BoardGameGeeks page. Each game likely has many mechanics, but not all of them are reported unless there are fans of the game willing to take the time to put it onto the website. So it is best to compare each mechanic to its peers.

The mechanics that tend to have more popular games are: area majority influence, card drafting, and variable player powers. These more popular mechanisms allow for different play styles each time that you play the game. If I have a different player power or draw a different card, it will change the dynamic of that individual play.The mechanics that tend to have less popular games are: simulation, roll spin and move, and hexagon grid. roll spin and move and simulation, both mechanics for The Game of Life, are more straight-forward play styles that just let random chance dictate the majority of the game. That random chance deciding the winner is a boring play style that doesn't make the game worth buying. 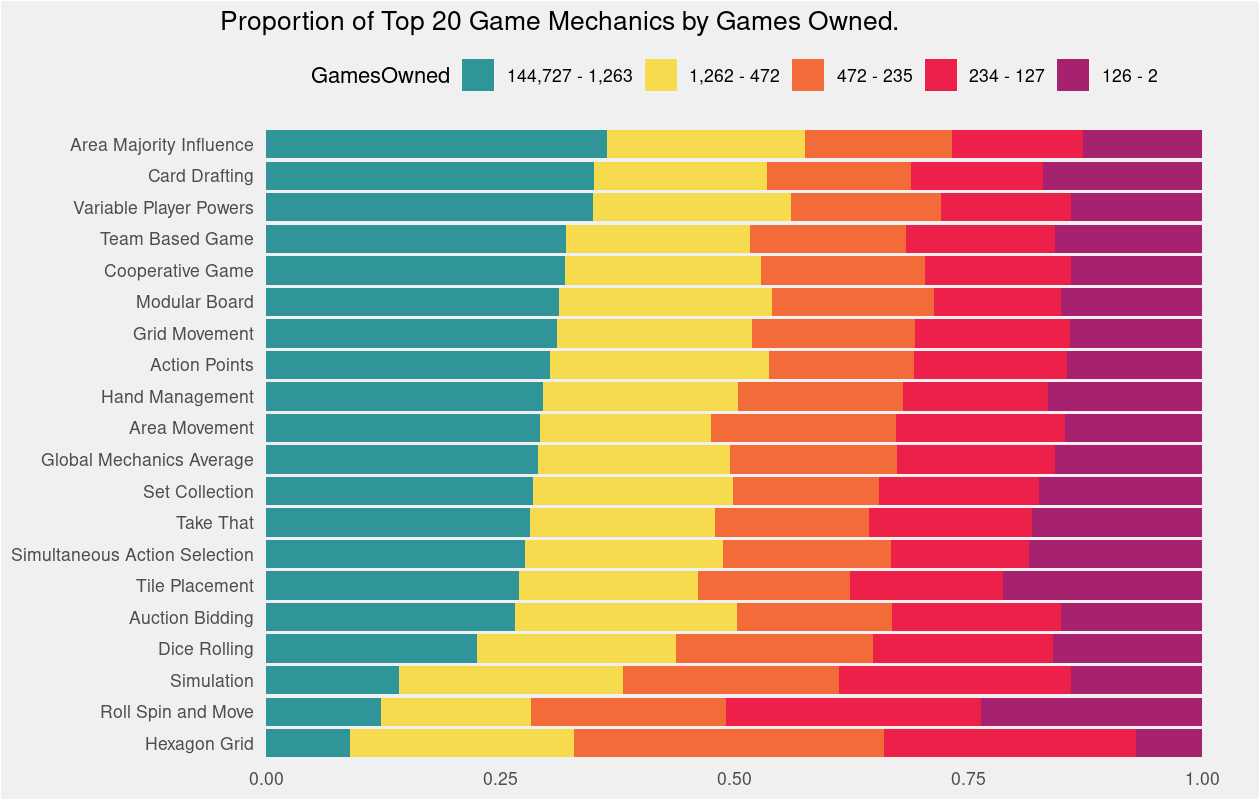 The mechanic counts graph shows that dice rolling and hand management games are the most common games. Set collection and variable player powers are the next tier of popular board game mechanics. They are basic mechanics that any game could build on as a foundation for a game. 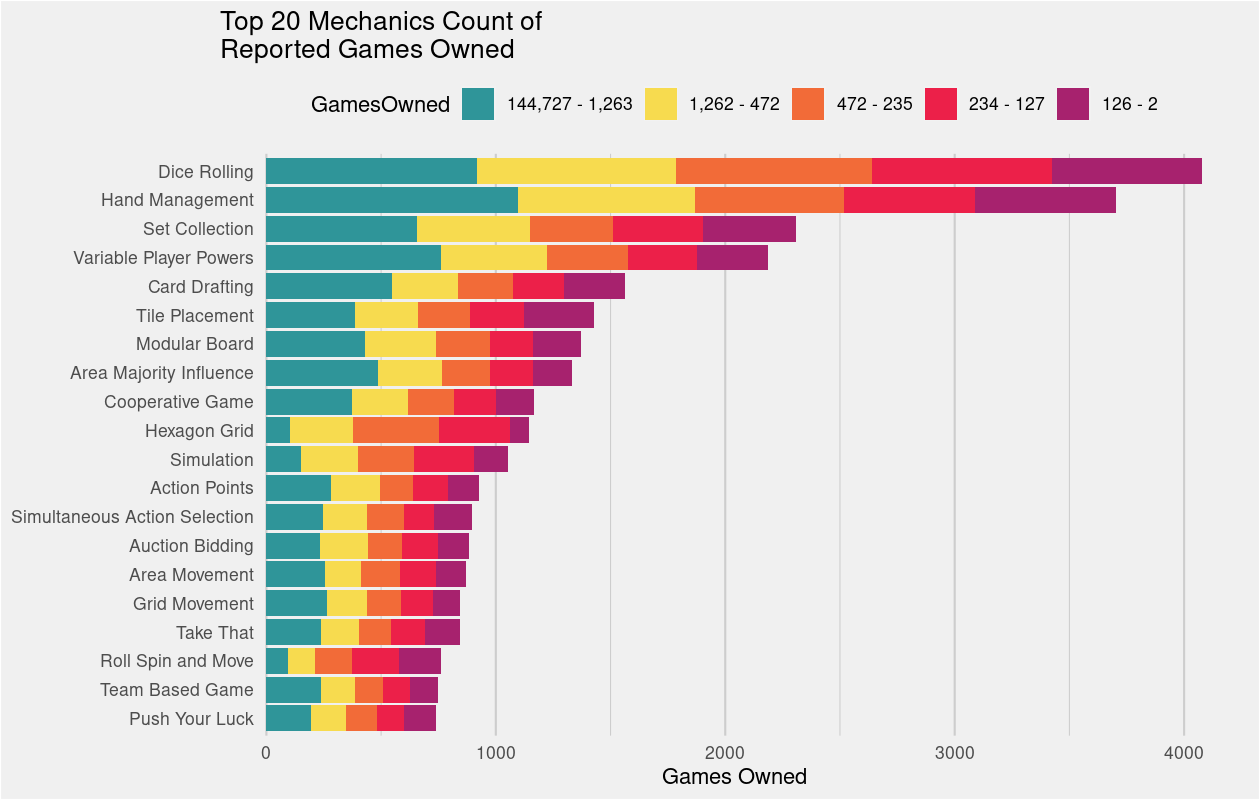 There are generally fewer categories that a game can fit into, so games that are more popular are not substantially more likely to have more categories added.

Games that can have a story or narrative around the game tend to be more popular. This is shown by economic, medieval, adventure, fighting, and fantasy being at the top of the list. These are complex rich categories. Economic games might be the most popular because of the widespread success of Catan.

The less popular games of children's games and action dexterity are games that might have less replay value, so people are less likely to buy them. War games have a unique distribution; they don't have many very popular or very unpopular games  but tend to fall  in the middle of our games owned range. 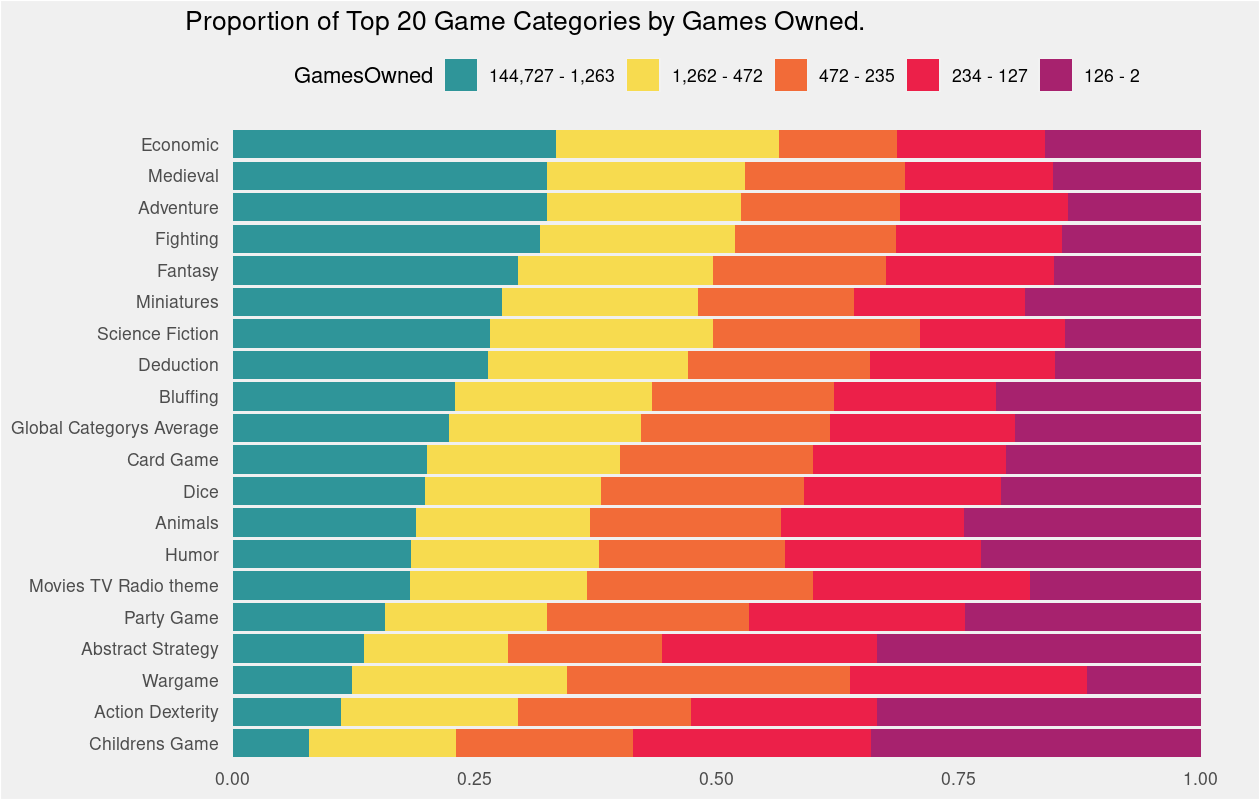 The category counts graph shows that card games are  very popular.  Nearly a third of the games in the entire dataset are card games! There are a surprisingly large number of fantasy games, which make up the third most popular category. 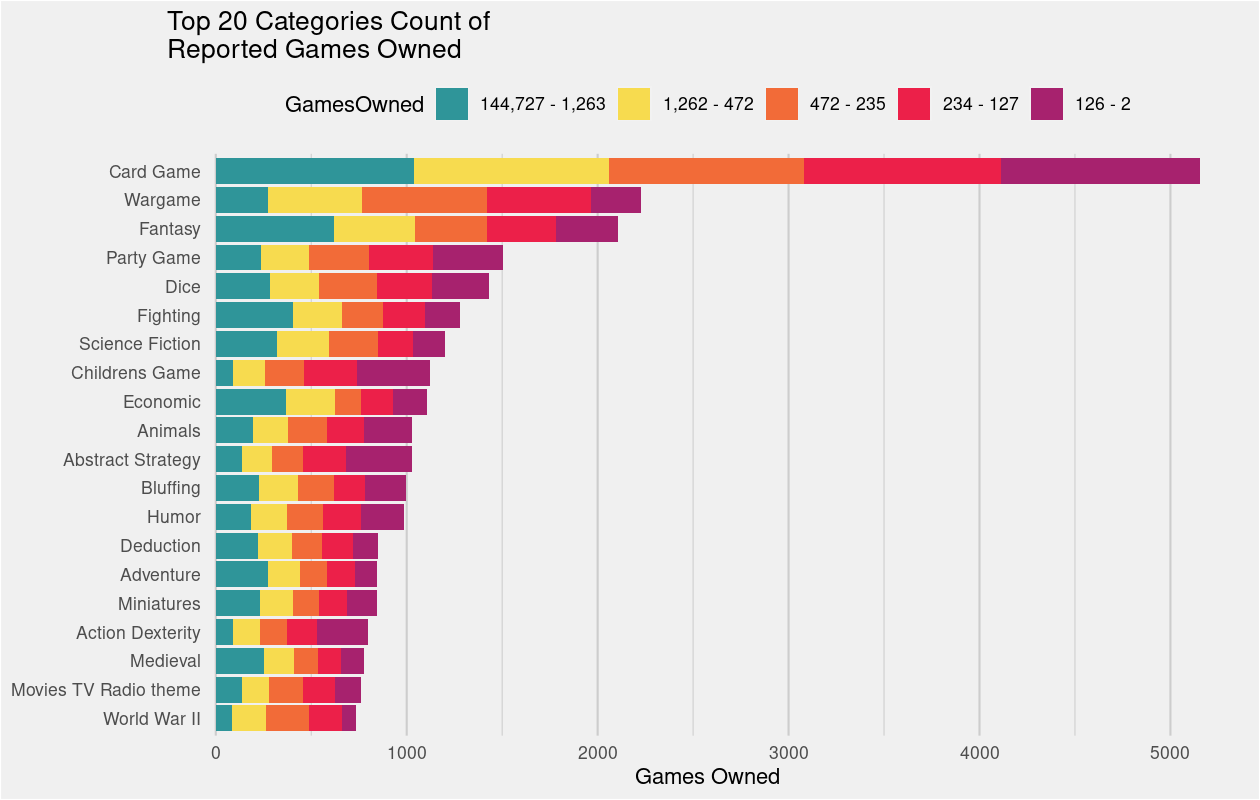 If you want to design a board game, then you need it to be a game worth buying. The game needs to be more complex than a children’s game but not too complex that you need a PhD to play it. The game needs to be long enough to feel worth buying: between 30 and 90 minutes. It should have rich mechanics/categories that allow for high replay value like: A fantasy game with variable player powers, an adventure game with cooperation, or an economic game with hand management.

Investigate the trends in the top 50 game categories and mechanics using my app. You can look at the distribution for the following for each game category/mechanic: average rating, game complexity, year published, minimum recommended age,  and average playing time.