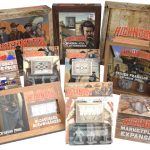 Back in March of this year, High Noon, a tabletop game set in a fictional Wild West, launched on Kickstarter. Players take the role of posses and battle it out on the streets of Sweetwater Gulch. The campaign was a success with nearly 800 people pledging over $120,000 to help make this game a reality. If you missed the Kickstarter campaign, it is not too late to get on the wagon and preorder this game. There are also 18 expansions to the base game available as well.

High Noon is a miniature tactical combat board game for 2-4 players (expansions can add additional players), ages 9 and up and lasts from 60-120 minutes. It’s currently available for preorder on BackerKit, with the base game selling for $52 and expansions ranging from $5 to $50. There is also a promotion for GeekDad readers when you preorder the game.  High Noon is designed by Dwight Cenac II and published by High Noon Game, Inc. I reviewed High Noon a couple months ago and discussed components as well as how to play the game. You can read my review here.

What Is Available to Preorder?

In addition to the High Noon base game, which includes everything you need to play the game as well as four unique posses, there are many expansions available to preorder. You could just get the base game and have hours upon hours of shoot-out fun. However, there is so much more. Dwight Cenac, the designer of the game, has created an entire fictional world of Saratoga, a map of which is included in the base game. Based on the American Old West of the late 1800s, this world has been influenced by history as well as film and legend. Fans of cinema will recognize themes from spaghetti westerns and other movies of the genre. Let’s take a look at these expansions, some of which were available during the Kickstarter campaign and others are available for the first time. Several expansions can be unlocked if enough people preorder them.

The first few expansions are things that enhance the game experience or help with storage. The 3D Gold and Chips Upgrade Pack lets you substitute the cardboard counters that come in the base game with plastic gold bars and chips. The Expansion Marketplace adds an economy to the game where players can use gold they earn during the game to purchase useful items and weapons that can help their posse stay alive and emerge victorious. There are also a Minis Crate for storing your miniatures and card boxes to keep your posse and loot decks organized.

While those expansions are nice, the core of the preorder is getting expansion posses. The main focus of the game are the unique posses. Each posse comes with 2-5 miniatures, their own posse deck of action cards, and a starting tile which is used to create the gameboard. The more posses you own, the more people can play the game and more tiles for building the town. I discussed the four posses that come with the base game in my review of High Noon. However, I am very excited about the expansion posses.

There are six expansion posses that are ready to go. Father Franklin comes with two miniatures, but only one of them is on the board at a time. He carries around a pinebox coffin on his back. However, when he sets it down and opens it up, he has a machine gun inside. While he can’t move around while using the machine gun, he can dish out a lot of damage to opposing posses. The Bloodcreek Bushwackers are former soldiers. This four-person posse has some interesting abilities that allow them to ambush other posses and even sabotage loot crates. They are the sworn enemies of Colonel Rogers and his Rough Riders posse (included in the base game). Los Hermanos is a five-miniature posse which can throw bottle bombs at enemies and when members of this posse are defeated, they can be replaced by more, make this posse difficult to wipe out. The Jenkins Brothers include three miniatures and focuses on close range attacks with shotguns, which negate some of the effects of cover, and melee. The two-miniature posse of Monco and McAtte features a quickdraw specialist as well as a long-range marksman. These bounty hunters are tough and can easily take on much larger posses. Finally, the Abernathy gang has three miniatures with the ability to set buildings on fire, forcing enemies to come out and fight. One of this posse even wears metal plate which makes it difficult to get inflict much damage on him.

There are also eight posses that will be produced if they get enough orders to unlock them. Four of these posses are available individually while the other four are available in two-posse bundles. The first bundle features Bonnie Beecher and the Bandero Blondes. This deadly all-female posse is ready for anything with pistols, shotguns, and a rifle. Plus their starter tile has a balcony for an elevated firing position. Grizzly Greenwood, also included in the first bundle, is a mountain man who fights alongside three dangerous wolfhounds. He can place bear traps and the wolfhounds can pin down enemies making it easier for Greenwood to hit them with his rifle. The second bundle also has two amazing posses. Sitting Bear’s Warband of three has a support character that can heal others as well as cast spells. The Kenzo Envoy bring the samurai to the game. These four members can move fast to get in close and attack with their katana. This posse and one other pay homage to the samurai movies which were the inspiration for some classic western movies.

The other four posses that can be unlocked individually feature the Okugu Shinbi, three ninja assassins who are the sworn enemies of the Kenzo, as well as Governor McGrady who comes with four miniatures: the governor and three members of his security. This posse has a completely different win condition and has the ability to influence other posses to get them to fight for the governor. Miroslav Zoric is one person, but he has five additional electric sentry miniatures which he can use to attack enemies. This posse has some new gameplay features as Zoric powers up his sentries. Finally, Maaravi the Magnificent is actually two brothers who appear on the map only one at a time. They can disarm and trick their opponents and have the ability to switch between the two brothers. As one disappears, the other appears in another location.

Why Should You Preorder High Noon?

As I mentioned in my review of High Noon, I love the game and the posses are what really make this game incredible. The expansions, especially the posses, really take the game to the next level. No two posses are alike. Each has their own unique abilities and require some different tactics in order to emerge victorious. I have personally played as Bonnie Beacher and the Bandero Blondes as well as Los Hermanos while playing against Maaravi the Magnificent and Monco and McAtte. These are all great posses and from what I have seen of the others, they are just as good. By preordering, you can help unlock some of those posses. All of the expansions are scheduled to ship in December of 2021 with the base game shipping even earlier. There is even a promotion available to GeekDad readers. Use promo code GEEKDAD to include all of the Kickstarter Exclusive benefits with your preorder. These include exclusive Loot Cards and the FREE Chips and Gold upgrade pack! This is a great deal. The links in this article should give you the promo code automatically.

Click through to read all of "Preorder ‘High Noon,’ Unlock Even More Posses, and Get Free Stuff" at GeekDad.If you value content from GeekDad, please support us via Patreon or use this link to shop at Amazon. Thanks!