Securing the borders of English and Whiteness 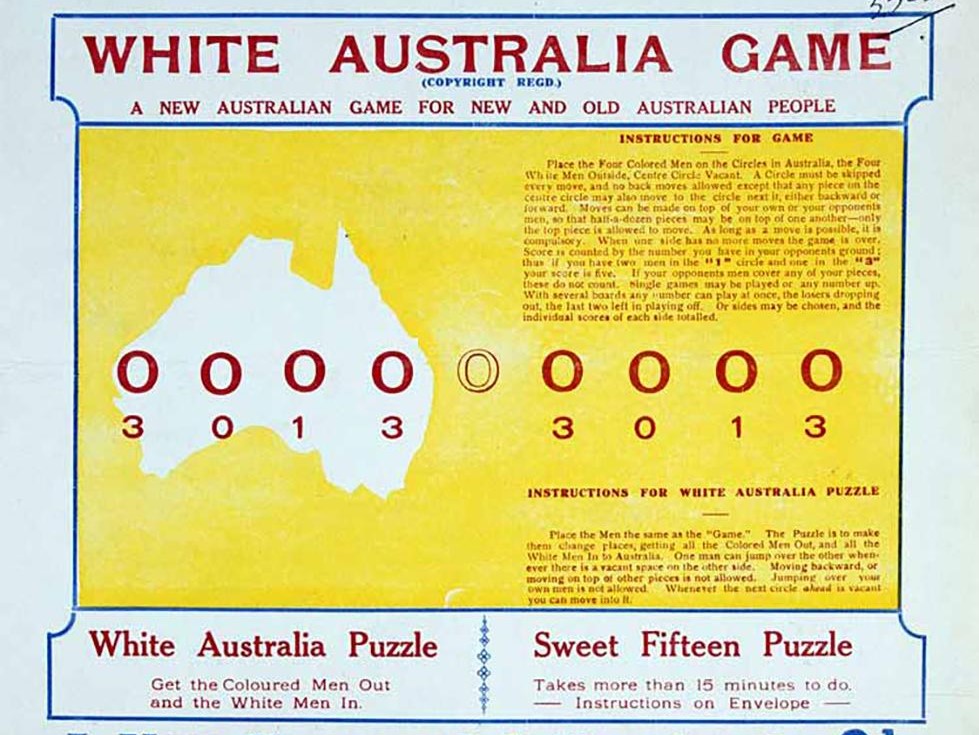 Australia as a White nation has deep roots: the aim of this 1914 board game was literally “to get the Coloured Men out and the White men in” (Image credit: National Archives of Australia)

The typical Aussie is widely imagined as a white English speaker

Despite decades of multiculturalism, the typical Australian is widely imagined as a white monolingual speaker of English. Australians who do not look white regularly report that they are made to feel as if they do not belong and those with non-native accents sometimes avoid speaking in public so as to remain inconspicuous.

With almost half of Australians born overseas or having at least one parent born overseas and about a quarter speaking a language other than English at home, the perception of Australia as a nation of white English speakers is completely out of step with demographic realities. Why do so many people continue to hold on to this perception?

The historical roots of Australia as a white English nation

There are historical reasons that can explain how Australia came to be an Anglo nation. One of these is the pernicious fiction of terra nullius that wrote Indigenous people out of the imagined nation.

Another reason is the erasure of the British-Irish conflict that was imported into the penal colony but subsequently glossed over into an imagined homogenous “Anglo-Celtic” settler population. Black convicts, who accounted for 1-2 percent of transportees, were cancelled even more completely.

A third foundation lies in a restrictive immigration policy that was designed to exclude non-British settlers in the first half of the 20th century and which was literally known as the “White Australia” policy.

These historical myths have deep roots, but do they still influence perception today?

The media teach us ways of seeing

Contemporary Australia is patently diverse. So why do we continue to see Australians who are not white and who do not speak English as their first and only language as perpetual outsiders? 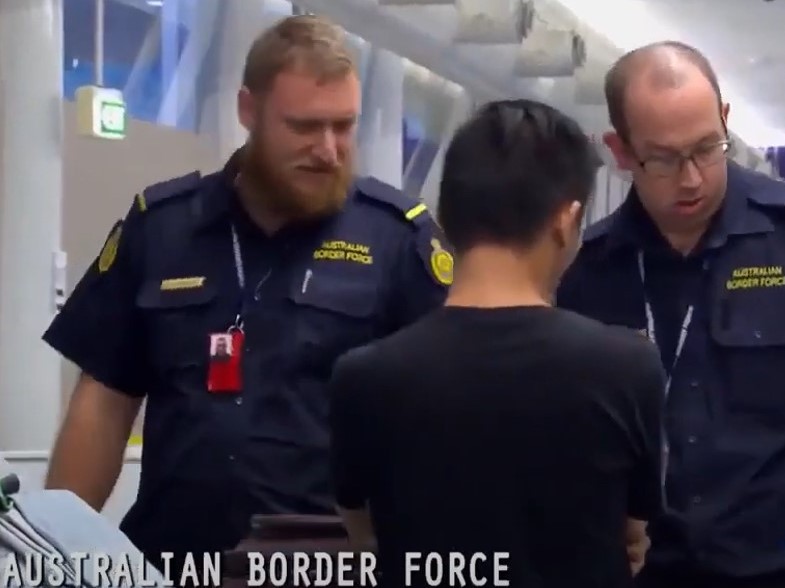 Many scholars have suggested that the media are partly to blame because they overrepresent white English speakers and underrepresent everyone else.

This may be true of news, current affairs, and fictional genres but there are some extremely popular genres that do show high levels of diversity. Reality TV is one such genre and none more so than the ever-popular Border Security.

Since it was first aired in 2004, Border Security has provided Australians with “a fascinating insight into the daily workings of the thousands of officers who dedicate their lives to protecting Australia’s border,” as the show’s website explains.

Over the years, the show has attracted many millions of viewers and you are likely familiar with the format: each episode has immigration, customs, or quarantine officers face off with passengers who are suspected of constituting a security threat.

The basic story arc is always suspicion, investigation of the suspicion, and resolution.

My colleagues Hanna Torsh, Laura Smith-Khan, and I have been collecting these episodes because they provide us with a data source for our research in intercultural communication. They also help us answer the question why we continue to imagine the prototypical Australian as a white monolingual speaker of English.

The heroes of Border Security are the officers. They are the official representatives of the Australian state, and their job is to keep Australia safe. Each episode shows them in action. As they are on the lookout for illegal activities and investigate the travelers they suspect of wrongdoing, the audience comes to identify with them. We watch with bated breath as they inspect luggage, interview passengers, and share their reasoning with the camera. 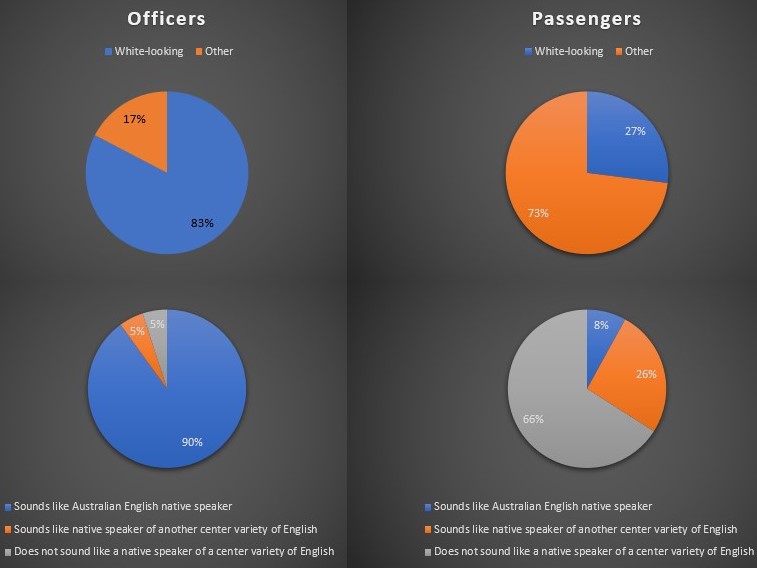 These heroes are not a representative cross-section of Australian society, though. In research just published in the journal Ethnicities, we found that the overwhelming majority of officers on the show look white (83%) and sound like native speakers of Australian English (90%).

Their uniforms further serve to mold them into a homogeneous group. And there is another aspect that enhances their uniformity: the striking diversity of their antagonists.

In the logic of the show, the officers’ hero identity is predicated on their dodgy antagonists: all those travelers who are trying to sneak into Australia on a tourist visa but are really here to work illegally, who are hiding prohibited foods, or who are smuggling contraband.

These suspects provide a stark contrast to the officers. Not only are they under suspicion – sometimes rightly, sometimes wrongly – to constitute a threat to Australia but their visual and aural identities are almost the inverse of the officers. 73% of suspects do not look white and 66% sound like non-native speakers of English.

The patterns we found in our research go some way to explaining why we continue to imagine Australians as white English speakers. But these patterns are not only about quantitative representation.

As the audience comes to understand Australian identity and threats to national security through the show’s stories, they come to see white English speakers as moral. Australia’s racial and linguistic others, by contrast, seem, at best, forever suspect and, at worst, guilty as charged.

If you are unfamiliar with the show, check out an episode on YouTube, e.g.:

The post Securing the borders of English and Whiteness appeared first on Language on the Move.