Take Your Board Games to New Heights With AdapTableTop 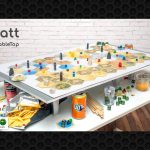 Game Start Studio recently completed a successful Kickstarter campaign for the new LED edition of their AdapTableTop, a portable tabletop system. While they didn’t have any prototypes of the new edition to review, Game Start did send me out one of their original standard Editions of the AdapTableTop to check out.

AdapTableTop, or ATT, is a modular, portable tabletop system that can be used on top of any existing table or flat surface. It’s quick and easy to both assemble and break down and provides a stable gaming platform while also freeing up additional space on your table.

The new LED Edition of the AdapTableTop includes color-changing LED light strips that can be installed both above and below the ATT, to light up both the playing surface and the tabletop below. The lights can be operated via an app on your smartphone, and the battery supply can both power the LED strips and act as a power bank to charge phones or other USB-chargeable devices. The AdapTableTop LED edition costs $84 EUR(approximately $99 USD) and allows you to build a play surface as large as 36″ x 24″. A Standard Edition without the lights costs $74 EUR(approximately $84 USD). There are also “Wargame” editions available both with lights and without, that are two of the standard edition kits combined for a substantial discount over purchasing each separately. The Wargame editions allow you to build a play surface as large as 36″ x 48.

The AdapTableTop was conceptualized by Zattini Mario and Fornino Giuliano, and designed by M2A Progetti, with graphics by BE Comunicazioni, published by Game Start Studio.

New to Kickstarter? Check out our crowdfunding primer.

My review is based on the original Standard Edition of the AdapTableTop, a product that was recently delivered to backers after an earlier Kickstarter campaign launched last year. The newer edition has made a few changes, notably to the dynamic stability adapter and the multitasking tool.

Here’s what came in the box:

Additionally, there are open source STL files that you can print on a 3D printer that allows you to make different themed legs for your ATT. Here are some examples, downloaded into the Cura slicing software:

When you purchase an AdaptTableTop, you can choose from 6 different colors. As you can see, I was sent a black version.

The tops of each panel are textured, to provide some surface friction so boards and playing pieces don’t just slide off. The bottoms have a grid of hexagonal slots, which is where you’ll attach the legs and stability adapters.

Each of the 12 included modular legs easily disassembles so that you can use them at different heights. There is a rubber foot that plugs into the bottom of either piece of the leg.

The Dynamic Stability Adapters are used, along the seams where panels are lined up, to help stabilize the AdapTableTop. The ones that will ship with the new edition of the ATT will be clear and have grooves running through them to attach LED strips to the bottom of the playing surface.

The Boardgame Stability Adapter can be used to secure a game board to the surface of the ATT, or, alternately, can be used to stabilize the legs of the second level of AdapTableTop that is built on top of the first. Yes, you can have multiple levels, as you can see in the image below:

The Multitasking tool attaches to the legs, and can be used as a drink holder or to hold your phone. Two of the tools attached side by side will allow you to hold a tablet or a screen. There are also optional accessories, such as token holders and deck holders, which insert into the Multitasking tool. Those accessories are part of a Player Kit which is available separately as an add-on.

While the current version of the Multitasking tool attaches to the legs, the newer version will attach directly to the panels to increase the flexibility of placement.

Assembling the AdapTableTop is a breeze. With the panels facedown on your table, you just arrange the panels into the size that you want and start plugging in legs and stability adapters. I started with a table using all of the components found in the Standard Edition:

This resulted in a very stable playing surface, but also one that was too large for the game that I was going to play on it, Pandemic.

And so, I flipped the ATT back over, removed a couple of panels, and now I had the perfect size for my game. It only took a couple of minutes both to initially assemble the AdapTableTop and then to change the size. I also added in a couple of Multitasking tools.

Now that I had the size I wanted for Pandemic, it was time to set up the game. First, I placed the game board and secured it in place with the Boardgame Stability Adapters.

And from there, it was just a matter of setting up the rest of the game as normal!

As you can see, there’s plenty of room underneath the AdapTableTop to stow the game box and instructions. If I had any of the AdapTableTop token cups, I probably would have used those along with the Multitasking tool for the Pandemic cubes. But as I didn’t, the tool worked great just to hold my drink.

Finally, I thought I’d see what I could do playing around with levels. Here’s what I came up with using just the Standard Edition:

Why You Should Back AdapTableTop

As someone who actually has a board game table, my initial thought was, “why would I need something like the AdapTableTop?” But after spending some time with an ATT, I soon realized just how versatile one is to have in your tabletop gamer’s toolkit.

The AdapTableTop frees up a lot of space on your table. Having that area underneath the game board to place rule books, game pieces, or any number of other items is very convenient. Add in the multiple uses of the Multitasking tool, and you’re really optimizing your gaming space.

The portability of the AdapTableTop is another obvious benefit. You can easily set up the ATT on any flat surface. And because of its lightweight, it’s easy enough to set a game up on it in advance, and then move it on or off the table that you’ll be playing on as needed. I can also easily bring the AdapTableTop with me to a game night at someone else’s house, to a cafe, or even the park. One standard edition box is surprisingly compact and lightweight, with a convenient carrying handle.

The modularity of the AdapTableTop is another fantastic benefit. You can customize your play area to the size and shape you want, especially if you have more than one Standard Edition box. For example, if you were playing Lords of Waterdeep with the Scoundrels of Skullport expansion, you could have one ATT surface for the main game board and two smaller ones for the small expansion boards. Plus, the ability to build up your gaming surface vertically at multiple different heights opens up all sorts of possibilities for tabletop RPGs and miniature games.

While I haven’t had a chance to try out the LED edition yet, I can already foresee some fun possibilities. Nemesis would become even more atmospheric with the game board bathed in a red emergency light. Or change the lighting in Everdell to reflect each of the seasons of the year. It will be interesting to experiment with the lighting once that edition ships.

Disclosure: GeekDad received a copy of the AdapTableTop for review purposes.

Click through to read all of "Take Your Board Games to New Heights With AdapTableTop" at GeekDad.If you value content from GeekDad, please support us via Patreon or use this link to shop at Amazon. Thanks!