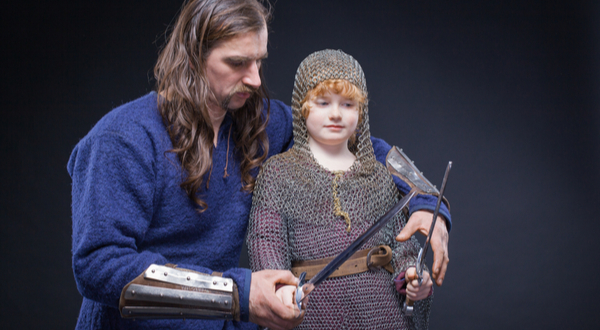 Recently, I had a wonderful and engaging conversation with a dear loved one. Dissimilar to normal conversations, this discussion had more layers than an onion. During our tête-à-tête, there was one layer that I found particularly intriguing. The other party asked: “What should an elder do when a child is disrespectful?”

IN THE OLDEN TIMES

When I was a child, there would have been no reason to ask the question about what actions an elder should take if a child were disrespectful. Back in my day, the answer was simple and obvious – show a child that “might makes right” and that “age trumps all”.

The consequences of a childhood error could be summed up in two words – overpowering and all-consuming. America may be the global standard for democracy but during my childhood, children who misbehaved were swiftly and severely reminded that we were merely citizens of a totalitarian state.

When I was a child and it still occurs today, parents routinely only offer edicts when interacting with misbehaving children. Far too often, parents only want all the rights and privileges of the Supreme Law Giver when dealing with a child who has erred. Shortsightedly, parents ignore the adjoining responsibilities and obligations of a Supreme Law Giver – to be fair, to be just and to be a model that makes it possible for the world to be better than it was when their child arrived.

Parenting today must be different than yesteryear. Parenting can no longer be primarily about rule and dominion. So despite having been raised to believe children should be governed, it is apparent to me that it is in the best interest for society if children are raised.

If you grew up during the same time as I did, you are no doubt familiar with some of the phrases that were part of most parents governing tool kit:

Much about society and the family has changed from when I was a child but progressive parenting has not gained equal traction. Thus, The Dark Age in Parenting continues as too few parents understand the necessity to move from a period of governance – domination and control. Parents who continue to look at authority as the primary role of parenting and view parenting as an entitlement rather than as the ultimate profession requiring continuing education and personal evolution are dooming themselves and society to a most unpleasant fate.

Although evolution is scary for some parents, evolution is a must for all parents. Parents concerned about losing their power over their children can relax. Without question parents will always be the authority.

However, parents must understand the difference between having power and being prepared to nurture the future elders of our society. The world moves too fast and is too complicated for parents to continue parenting as if we are Dr. Evil and our children are the minions placed on earth to serve us in our pursuit of world or household domination.

MORE ABOUT THOSE PHRASES

In addition to attempting to rule children as the lowly subjects of our fiefdom by subjecting them to ineffective discipline such as corporal punishment, many parents express their authority verbally in an equally inefficient and ineffective way. By withdrawing, yelling, screaming and using historically harmful expressions and sketchy phraseology, parents facilitate the advancement of The Dark Age in Parenting.

Silencing women or any group of society is a perilous precedent. You don’t have to stretch your imagination at all to understand the danger in this ideology. The statistical proclivity of missing and exploited children, sexually abused children, and children who commit suicide provides a clear picture of the danger that lurks when children are seen but not heard:

I hope the numbers make it clear. Children should be seen and heard. Seeing and hearing children are the first two steps to protecting and understanding children. Children must be protected and understood if society is to continue and improve.

Parents who are concerned about raising competent and capable children will not decree “because I said so” as the reason to do anything. Instead parents hoping to eradicate The Dark Age of Parenting will adopt the use of reason which includes an honest yet age appropriate explanation of what comes before and after “because”. Parents who are willing to raise children “by” explaining the “cause” have a far greater chance of getting the desired outcome.

3.  “Respect your elders” – Perhaps the most frequently used but misunderstood of all parental edicts is “respect your elders”. Parents everywhere are notorious for using this command. This command might be the command that gets children most excited about growing up. Knowing one day that you will be able to say to someone that they must respect you because of your advanced age is a power trip seemingly too good to miss.

Respect your elders originates from Leviticus 19:32. In the King James version of the Bible the passage states “Thou shalt rise up before the hoary head, and honor the face of the old man, and fear thy God: I am the LORD.” Most adults use this scripture like a “Monopoly Get Out of Jail Free Card”. The thinking is that when I don’t want listen to a child, when I don’t want to reflect on the bigger picture, when I’m unable provide a reason beyond “because I said so” and when I’m at an uncomfortable emotional impasse and all else fails – wait for it, wait for it…the older person get to shout “respect your elders”.

While the literal translation of the scriptures makes a parent feel like they’ve won some symbolic board game, in truth they have lost. Parents using the scripture as a power play lose because the scripture like most scriptures has an additional mostly overlooked meaning. Figuratively the scripture is as much about the “strong” showing deference for those who are “weak” and about the “experienced” showing favor to the “unproven”. Turned on its axis the scripture bears a similarity to the words Uncle Ben spoke to Peter Parker, “with great power comes great responsibility”.

Parents primarily looking to be respected because they are older shall soon discover that having a greater regard for those who are weak and naïve – in particular children – is the best and only way to be truly respected. If parents/elders don’t want to be alone in a home surrounded exclusively by other elders when we are old and weak and simultaneously ruled by abusive and misguided future leaders that we currently call “kids” – while we still have the chance – we might want to include a few additional passages into our parental lexicon:

So what should an elder do not to feel disrespected? The first thing an elder must do is make sure that they understand the full meaning of the word elder.

Anyone who believes themselves to be an elder has to appreciate that being an elder is not exclusive to age. Rather, an elder is someone trained and prepared to lead, to nurture, to teach, to encourage, to calm…to model. In short, an elder is one equipped to raise – not merely govern – a child so that the child might grow to be a person capable of elevating society.

The second thing an elder must do not to feel disrespected is recognize their role as a servant first. Only those who appreciate that the role of an elder is to personify humility and be willing to sacrifice for the collective good are amongst those truly capable of being valued as an elder. Elders are best remembered and forever honored when children improve the village.

Moreover, we must remember that the world is not the same as it was in the 60s, 70s or even the 80s. It’s time to get out of The Dark Age of Parenting and start a Parenting Renaissance. I hope you would agree that the parental responsibility goes well beyond governing as the elder. The parental/elder obligation extends to raising a future chief.

Finally, it’s also way past time to rid ourselves of archaic elder philosophies and outdated parenting methodologies. It’s time to think and act beyond our own hubris and short-term perspective. It’s time to raise children based on a willingness to adapt to a changing world, to objectively assess our own behaviors, to become models of societal accountability and to take ownership for the outcomes of the world we want our children and those we love to live in now and long after we are gone.

Previously Published on The RS Project

The post Why Now Is the Time to Leave the Dark Age of Parenting appeared first on The Good Men Project.